Most people wouldn't wade into water infested with alligators – some weighing more than a thousand pounds – but Robbie Keszey has more than 600 of them on his property.

BUSHNELL, Fla. - Most people wouldn't wade into water infested with alligators – some weighing more than a thousand pounds – but Robbie Keszey has more than 600 of them on his property.

"I'll sit on the edge with my feet in the water. I'll walk out in there and swim," says the experienced animal expert and host of YouTube channel @GetSwamped.

Keszey says he forges strong bonds with the animals. We asked him to examine a horrifying video frame-by-frame to see why a Utah alligator trainer was attacked by the reptile during a children’s birthday party.

"The gator comes up to the door, ready to be fed. The girl goes to push him back, but the first mistake she makes, the gator can't see the hand here, but once it goes past the head, it can't see that," Keszey says. 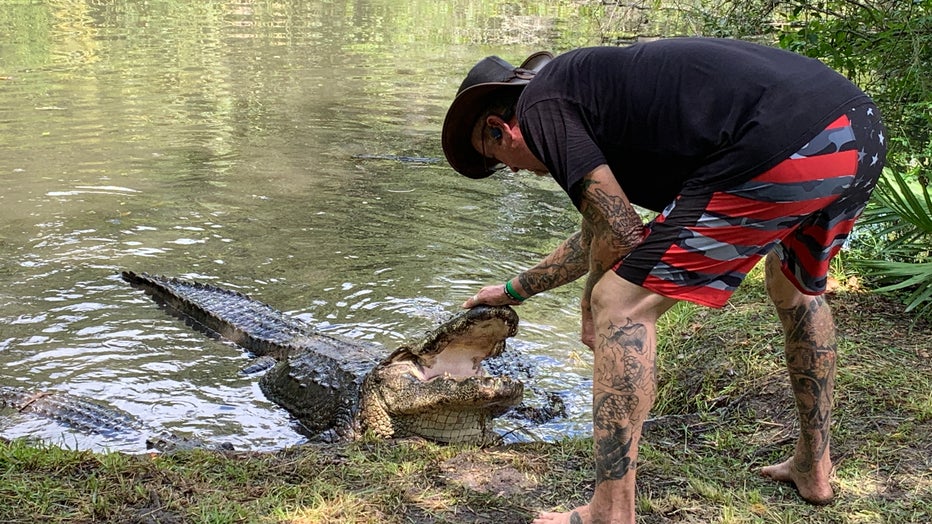 He says once she did that, the gator's mind didn't connect the hand with being part of the trainer's body, mistaking it for food. Fellow expert Chris Parker says gators then go into a so-called "death roll," a classic technique they use for eating.

"It's very useful because if they get a hold of something way bigger than they can swallow, they'll be able to spin and spin, and rip a piece of that off," Parker says.

Keszey says especially with an alligator that big, there are other important safety steps that the trainer should have taken.

"We always tape the mouth. It's just common sense, it's safety."

But Keszey says it is important to let people safely interact with wildlife.

"When they touch -- especially a little kid -- when they touch and feel something, all of a sudden that turns on a lightbulb and that sparks the interest," he says.

Keszey says the main takeaway is to always respect these animals and leave them alone in their environment.