LAKE MARY, Fla. - Florida’s congressional delegation is set for a scramble, as a number of high-profile primary grudge matches Tuesday paved the way for the November elections.

One of Tuesday’s biggest Florida winners was Maxwell Alejandro Frost, a 25-year-old Democrat who fought off two former members of Congress, a state senator and other opponents in a crowded Central Florida race in Congressional District 10. The seat became open because U.S. Rep. Val Demings, D-Fla., is running against U.S. Sen. Marco Rubio in November.

Frost will face Republican Calvin Wimbish in the general election. But in an Orange County district where Democrats outnumber Republicans by a more than two-to-one margin, Frost is expected to become Demings’ successor.

Frost, who will be the state’s first Gen Z member of Congress, is a community activist who has worked for the American Civil Liberties Union of Florida and was an organizing director of the March for Our Lives organization, which has pushed for stricter gun-control laws. 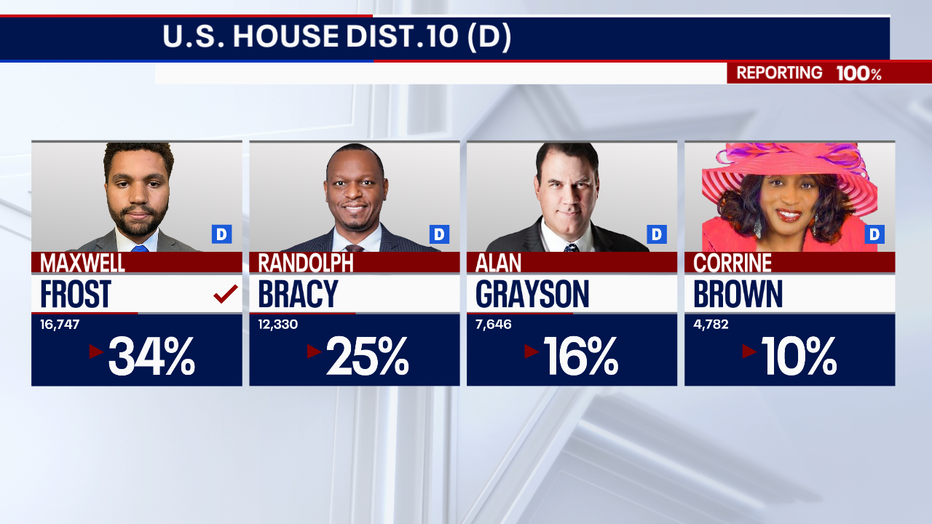 "Today’s election is proof that Central Florida’s working families want representation that has the courage to ask for more. I share this victory with the nurses, forklift drivers, teachers, caregivers, social workers, farmers, union organizers, cashiers, and other members of this vibrant community who supported this campaign. I love this community, and my decade-long fight for everything and everyone in it is just getting started," Frost said in a statement Tuesday evening.

Meanwhile, Florida voters also are expected to send a number of other fresh faces to Washington, D.C. after the November general election.

In a high-profile Republican contest, former Secretary of State Laurel Lee defeated an influential state senator in the race for a redrawn Congressional District 15 in parts of Hillsborough, Pasco and Polk counties.

Lee, also a former circuit judge, captured 41.5 percent of the vote in the GOP-leaning district, according to the state Division of Elections website.

Lee’s opponents in the primary included state Senate Appropriations Chairwoman Kelli Stargel, a Lakeland Republican who is forced to leave the Senate this year due to term limits, and state Rep. Jackie Toledo, R-Tampa. Democrat Alan Cohn will face Lee in the November general election.

Another redrawn congressional district in Central Florida drew a crowded field of Republican candidates, including state Rep. Anthony Sabatini of Howey-in-the-Hills and Cory Mills, a Bronze Star recipient who served as an adviser to former President Donald Trump’s administration.

Mills received nearly 38 percent of the GOP vote in Congressional District 7 in Seminole and Volusia counties. Sabatini was next with about 24 percent, according to the state Division of Elections website.

In the Tampa Bay area, five Republicans vied for a reconfigured district currently held by U.S. Rep. Charlie Crist, who on Tuesday won the Democratic nomination for governor.

Anna Paulina Luna, who was endorsed by Trump in 2020 but lost to Crist, defeated GOP challengers including Kevin Hayslett and Amanda Makki in Tuesday’s Congressional District 13 race. Luna received more than 44 percent of the vote.

DeSantis played an unusually outsized role this year in the once-a-decade reapportionment process, submitting a congressional map that was adopted during a spring special session by the Republican-controlled Legislature.

The map, currently being litigated in state and federal courts, is expected to increase the number of Republican-held congressional seats from the current 16 to 20, based on 2020 voting patterns. Due to growth in population, Florida’s delegation grew by one seat to a total of 28 congressional districts.

The redistricting process has resulted in political musical chairs of sorts, with some members of Congress running for re-election in newly numbered or redrawn districts, a number of seats with no incumbents and numerous state lawmakers seeking tickets to the nation’s capital.

Another South Florida Democratic primary victor was Jared Moskowitz, a former state representative who served as the state’s emergency management director under DeSantis. Moskowitz captured more than 61 percent of the vote in the crowded race for Congressional District 23, a Democratic-leaning seat which also includes portions of Palm Beach and Broward counties.