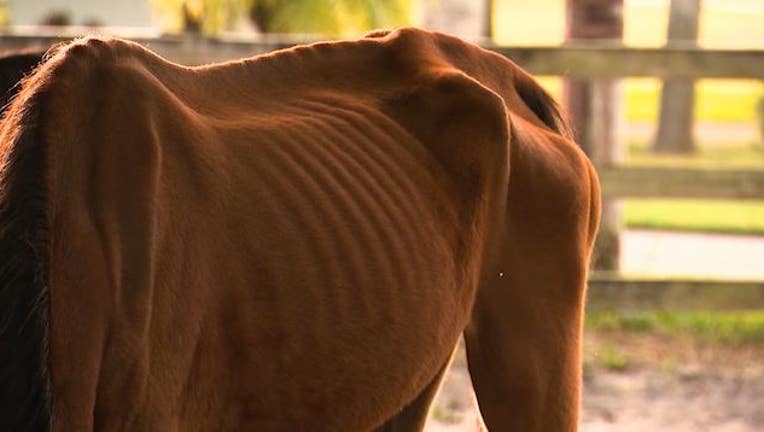 EDGEWATER, Fla. - The Volusia County Sheriff's Office is investigating its response to a case of two emaciated horses found on an Edgewater property.

The horses, living at a home on Cemetery Road, were seized on Wednesday after someone posted photos of the thin animals on social media.

"On a scale of one to nine, nine being the horses in perfect condition the, the vet gave them a one," Volusia County Sheriff Mike Chitwood said.

Documents reveal deputies responded to the property in July, checking on a report of underweight horses.

"The owner had said that there was some kind of a medical issue and that they were under vet care," Sheriff Chitwood said.

The Volusia County Sheriff's Office is investigating its response to a case of two emaciated horses found on an Edgewater property.

He told FOX 35 News that the responding deputy wasn't able to get in contact with the veterinarian and there was no follow-up.

"For some unknown reason, and why I have an investigation going on now, there was no follow-up for months," Chitwood said.

He said officials have now been able to get in touch with the vet, who said he had not seen or treated the animals since 2018.

Sheriff Chitwood tells FOX 35 that he has requested an inquiry from the deputies' supervisor.

"I need to find out what my deputies did and didn’t do to allow this thing to run on for three months. It’s absolutely unacceptable," he said.

He believes it could have been because of how the deputy was possibly contacted during the original report.

"Probably one of the breakdowns in this is someone called them directly and there was no chain of command following up," he said.

He called the deputies working the unit professional, excellent employees.

"I can assure you it wasn’t done intentionally. There was some type of a failure where the ball got dropped. How and why is what I would need to know," he said.

As to when and if the owner of the horses will face charges, the sheriff said it'll depend on what the veterinarian's report reveals.