FOX 35 News got an exclusive look at the newest high-rise in Downtown Orlando, the SunTrust Plaza Tower.

ORLANDO, Fla. - FOX 35 News had a front-row seat on Interstate 4 to the construction of the SunTrust Plaza Tower, the first high-rise to be built in Downtown Orlando in more than a decade.

“We wanted to present something to Downtown Orlando that was impactful, and would also change the skyline and that was different than what you see in other buildings,” said Damien Madsen, senior vice president of the Lincoln Company.

The $120 million, 28-floor tower took two years to construct, but it’s done and the developer Lincoln Property Company opened the doors to FOX 35 News for an exclusive tour. 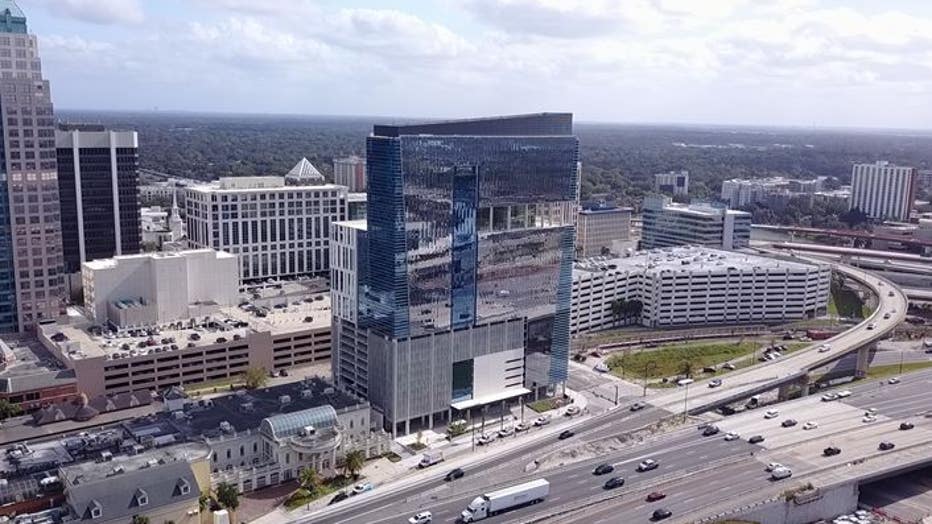 We start outside where SunRail will stop at the door to the tower.  The southbound Church Street Station is being moved to the side of the high-rise.

“This is going to be the new train station in Downtown Orlando so that people who work in this building or coming to the hotel, they can stop here,” Madsen said.

Now to the lobby, a SunTrust Bank branch, and a future coffee shop.  A parking garage makes up the next several floors, then state-of-the-art office space up to level 17.  Floors 18 through 28 will be a 220-room AC Marriott hotel.

“It’s a business traveler’s hotel. AC by Marriott is referred to by many as the Armani of hotels, so extremely high-end but also at the same time fairly simple,” Madsen said.

In the hotel lobby, there will be a sky bar and lounge.

“It’s open to the public. It’s going to be a very active, vibrant lounge, bar, light bites type of an environment,” Madsen said.

There will be an outdoor deck with extraordinary views.  The tower also utilizes the latest in security technology.  Instead of key cards or fobs, biometric thumbprints grant you access.

The developer’s plans don’t stop here. A second tower is already in the works, just north of the SunTrust Plaza.

“Completely different than anything anybody has seen,” Madsen said.

It will be even taller, standing at 34 stories. This high-rise will offer retail and office space, residential units and a long-term stay hotel.

Construction is scheduled to begin this summer.  In the first tower, the build-out is underway for the AC Marriott.  FOX 35 News learned it is expected to be open by summer 2020.