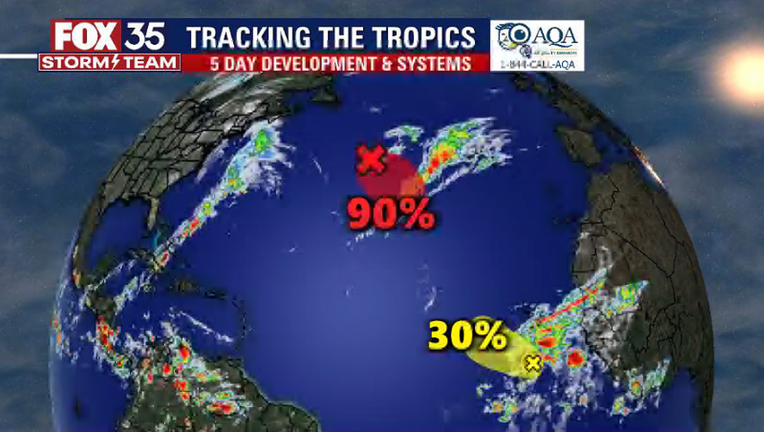 ORLANDO, Fla. - With just one month left to go until the end of hurricane season, forecasters are tracking 2 systems with the possibility of development.

A strong, frontal low-pressure system located several hundred miles south-southeast of Cape Race, Newfoundland has a 90% chance of developing over the next five days.

"The nontropical low is likely to lose its associated fronts this weekend while it moves southeastward toward slightly warmer waters, and thereafter it could transition to a subtropical storm later this weekend or early next week over the central Atlantic," the National Hurricane Center said Saturday.

The system is expected to turn northward and move toward colder waters by the middle of next week.

The second system is located in the eastern tropical Atlantic and is producing disorganized showers and thunderstorms several hundred miles south of the Cabo Verde Islands.

"Some gradual development of this system is possible over the next couple of days or so as the disturbance moves generally northwestward at 10 to 15 mph."

By the middle of next week, the system is forecast to move northward over cooler waters and further development is not expected.

The last major hurricane was Sam, which formed in late September. It strengthened into a Category 4 storm as it moved across the Atlantic. The last tropical storm was Victor which fell apart earlier this month.

The next name on the storm list is "Wanda," finishing off the list of 2021 Atlantic tropical system names. At this point, forecasters will need to use the alternate list of names. In the past, the Greek alphabet was used but this was changed this year.