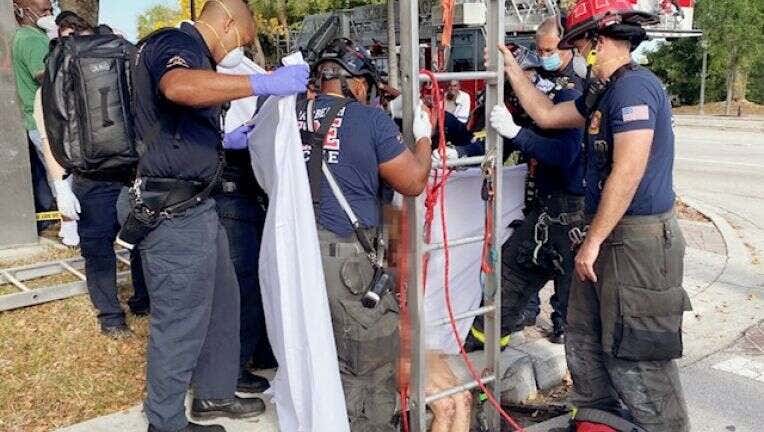 The naked Florida woman who rescuers pulled out of a storm drain Tuesday had been missing for three weeks, according to local reports.

Authorities said a passerby called 911 after hearing 43-year-old Lyndsey Kennedy calling for help from within an 8-foot pit at about 9 a.m. in Delray Beach.

Police and firefighters removed the cap, lowered a ladder and harness and pulled her to safety – while holding up a white sheet to protect the nude woman’s privacy.

She was seen with dirt on her feet and scraped knees, and authorities said she was so weak she couldn’t stand on her own. They took her to a nearby hospital.

"She was lucky," Delray Beach Fire Rescue spokesperson Dani Moschella told the Sun Sentinel Tuesday. "I don’t know how much longer she would have been OK down there. The idea that somebody might be down there for any length of time is disturbing. It’s dirty, dangerous, there’s snakes, rats, garbage, dirt and leaves, anything that’s on the street that washes into a sewer, and it smells terrible."

She had been missing since March 3, although authorities were not sure how much of that time she’d spent in the pit.

Her boyfriend reported her missing the same day, telling investigators he returned from work to find her purse and phone at his place – but not her, according to the West Palm-based WPEC.

MORE NEWS: Kids found clinging to paddleboard over a mile off Florida coast

She told investigators that she became trapped after exploring a tunnel she found while swimming in a canal near the boyfriend’s home. After several turns in the tunnel system, she told police, she became lost.

Her mother reportedly told investigators her daughter had a history of mental illness.