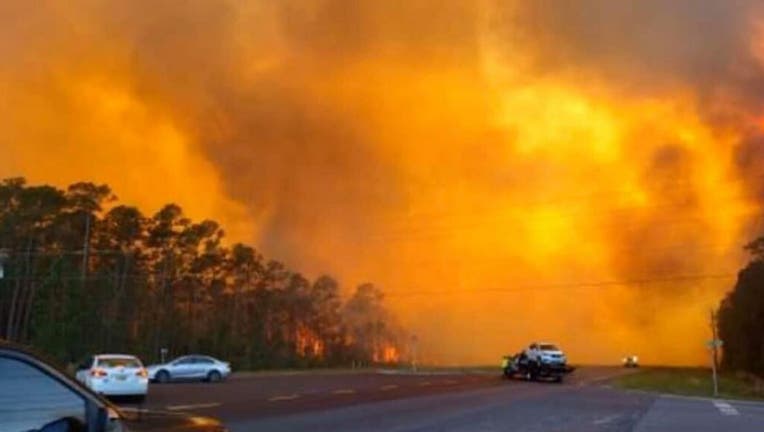 PENSACOLA, Fla. - Some 1,600 people have been forced to evacuate on Florida's Panhandle after raging wildfires burned several homes and left a portion of Interstate 10 closed on Thursday due to heavy smoke, according to officials.

One of the blazes broke out Monday afternoon in Santa Rosa County, named the Five Mile Swamp Fire, after a prescribed burn Monday quickly grew out of control.

“This is a rapidly evolving situation,” Santa Rosa emergency management officials said in a statement. “If you do not feel safe in your home, you should leave. Take your pets with you.”

The Florida Forest Service said in a statement that the blaze expanded to 10 times its size due to high winds and low humidity since Wednesday morning.

Some 1,100 people were asked to evacuate from the area. Spokeswoman Brandi Bates told the Pensacola News late Wednesday that some homes had already been damaged by fire, though she did not have an exact number or extent of damage. She said 336 homes were in the direct path of the fire, as of 6:30 p.m.

Authorities told WEAR-TV on Wednesday that some people were being saved from "life or death" situations. 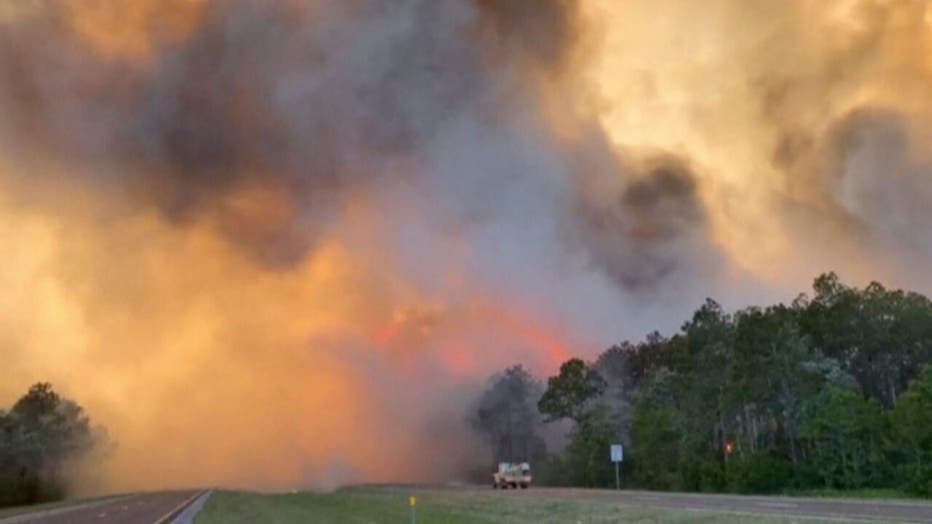 Fire and smoke rise from trees alongside a road in Santa Rosa County, Florida. Wildfires raging in the Florida Panhandle have forced nearly 500 people to evacuate from their homes, authorities said. (Florida Department of Agriculture and Consumer Ser

Fire officials told FOX10 that crews are using 18 tractor/plow units, three helicopters, and crews from several fire departments in the area to fight the blaze.

The evacuation order will remain in effect until noon Thursday and then will be reevaluated, the Florida Department of Agriculture and Consumer Services said in a statement.

“This is an extremely dangerous and fast-moving wildfire situation that is evolving rapidly, so everyone in the affected area should follow directions from state and local officials,” said Florida Agriculture Commissioner Nikki Fried.

The blaze caused officials to close Interstate 10 on Wednesday from Exit 22 to Exit 31. The highway was still closed as of Thursday morning.

The Five Mile Swamp Fire could burn for the next several days, according to FOX10.

Almost all of Florida has had less-than-usual rain this year. The National Weather Service (NWS) issued a red-flag warning for the Panhandle area on Wednesday due to dry and windy conditions that cause dangerous fire conditions

In nearby Walton County, firefighters were battling another 575-acre blaze.

More than 500 people had to be evacuated from the area, with multiple buildings lost. 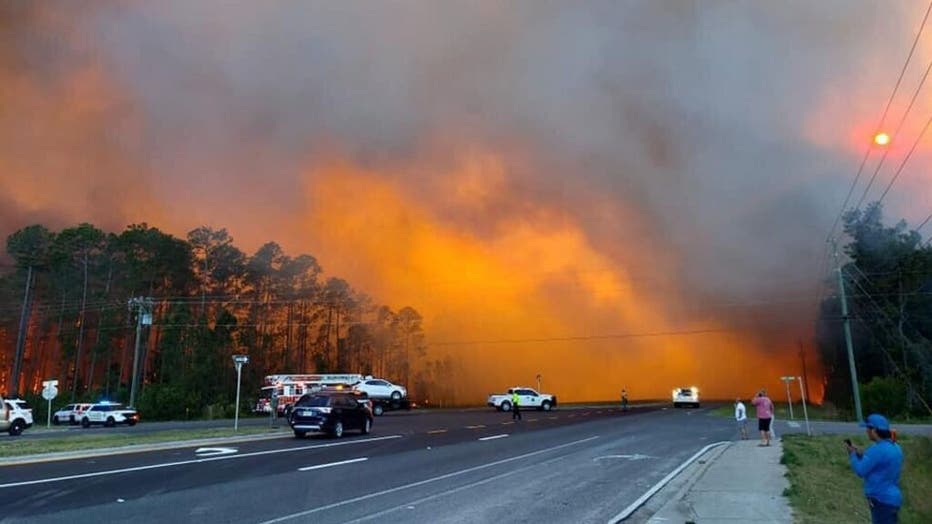 On Thursday morning, Walton County Emergency Management said on Facebook that the blaze was 60 percent contained.

There have been no reports of injuries or deaths as a result of the fires.

According to forecasters from the NWS Weather Prediction Center, conditions that lead to the raging fires on Wednesday are forecast to continue.

"Lowering humidity and gusty winds will also help elevate the risk of wildfires over parts of Florida," the WPC said.