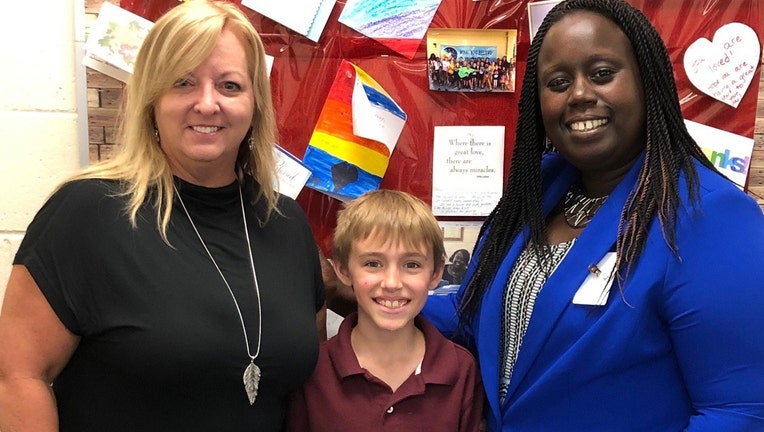 FRUITLAND PARK, Fla. - The quick thinking of a Florida teacher's assistant saved a boy's life after he choked on a piece of cheese.

Lake County Schools says that fifth-grader Jordan Strauss was unable to breathe or speak earlier this month after a piece of cheese got stuck in his throat.

“I was choking and scared,” he said. “At first I reached into the back of my mouth and pulled out as much as I possibly could. Then I ran to the trash can and tried to cough it up, but that didn’t really work.”

Jordan then made his way to his writing buddy, Teacher Assistant Sherry Jutkofsky, with his hands around his throat.

"I could tell he was in distress," she said.

“I did the Heimlich maneuver, but it didn’t work,” she said. “He’s very little and I was afraid of hurting him.”

By this time, others reportedly noticed there was a problem. Principal Tammy Langley and other adults ran to the cafeteria.

“It was a blessing that everyone remained calm during the ordeal while being very concerned for his well-being,” the Principal said. “We knew that [Jutkofsky] was the lead and everyone took a supporting role at that point.”

“I did it harder and it worked,” she said. “It took a few attempts though. They talked about that in the class. They told us not to be afraid to really get in there. It was a good class with great instructors. They taught us well.”

Lake County Schools says that Jordan is doing fine now and appreciates his relationship with Sherry, or as he calls her, "Mrs J."

“My mom said she is so thankful, and I am too,” he said. “Thanks for saving my life!”