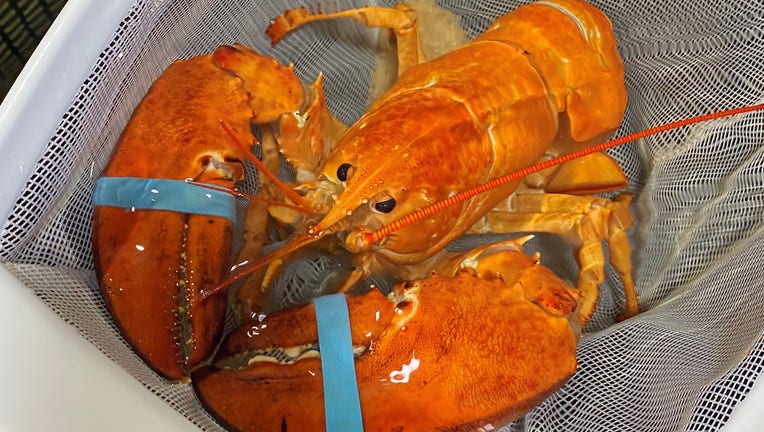 MYRTLE BEACH, S.C. - A rare one-in-30-million orange lobster is living the good life at an aquarium in South Carolina after being discovered by a Red Lobster restaurant in Florida.

The colorful crustacean was shipped to the restaurant in Hollywood, Florida, and as the Ripley’s Aquarium of Myrtle Beach says, there was obviously something very different about this one.

"Turns out, it was a rare one-in-30 million orange colored lobster!" the aquarium wrote on social media. "Employees immediately went on a mission to rescue the unique crustacean and Ripley’s Aquarium of Myrtle Beach answered the call."

Experts say lobsters with Cheddar's hue are extremely rare because their bright, unusual coloring makes them very attractive to predators.

Mario Roque, who is the manager of the Florida Red Lobster where Cheddar was found, told Ripley's he was happy to help find Cheddar a forever habitat.

"Sometimes ordinary miracles happen, and Cheddar is one of them. A group of incredible people helped us make this possible. We are so honored to have been able to save Cheddar and find her a good home."

This isn't the first time a lobster has been saved from becoming a hot meal for someone at a Red Lobster restaurant. In 2020, a Red Lobster employee in Ohio discovered a rare blue lobster in one of its deliveries and had it sent to the Akron Zoo to live out its years.