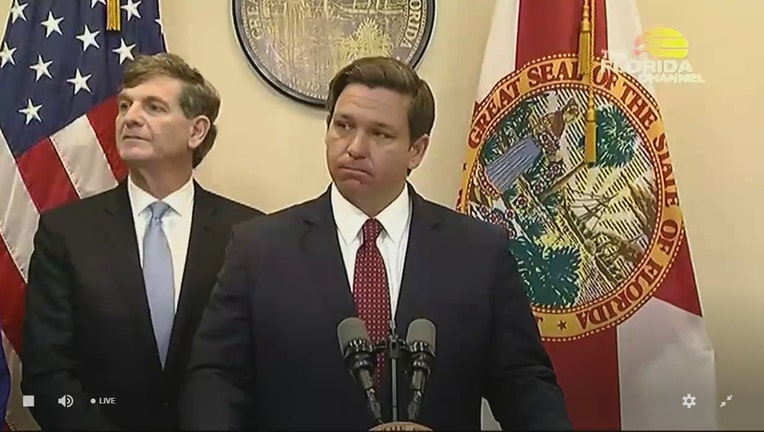 TALLAHASSEE, Fla. - Florida Gov. Ron DeSantis attempted to reassure his state Thursday that health officials were prepared for any cases of a new virus that has killed thousands worldwide, saying there were no confirmed cases — yet — of infections from COVID-19.

“There is still no known cases of coronavirus in the state of Florida,” the governor said during a news conference at the state Capitol.

But despite assurances, there was growing fears about the further spread of the virus amid criticism that state officials were not being adequately forthcoming about any suspected cases in the state.

“Obviously, if there is — and hopefully we don’t have — any identified cases, it is something we would notify the public about,” DeSantis told reporters.

The state’s Surgeon General, Dr. Scott Rivkees, declined to confirm if any suspected cases — even if they did not turn out positive for the virus — have been investigated in the state. He and the governor cited state laws for withholding any statistical information.

The matter quickly erupted into a political issue.

“I was disappointed that at today’s briefing, state officials failed to be forthcoming with the public about suspected cases in Florida,”she said in a statement.

“As a top tourist destination and home to many vulnerable seniors, Florida is uniquely at risk from the threat of this illness,” she said after the governor’s news conference.

During a news conference in Tallahassee by legislative Democrats, lawmakers pushed the governor and state health officials to release more information.

“Why are they waiting for a confirmed case to share aggregate data,” asked state Sen. Jose Javier Rodriguez.

“The management of public information from the governor’s office and the Department of Public Health is not helping us as Floridians as we are already preparing for COVID-19,” Rodriguez said.

On Wednesday, President Donald Trump downplayed the threat to Americans, saying the United States was “very, very ready,” even as health officials expressed alarm over the now-global spread of the virus known as COVID-19.

The virus has killed thousands in China, where it originated, and there are growing fears that casualties could rise across the oceans as the number of deaths and infections also grow in Europe and elsewhere.

The chief economist for the Florida Chamber, Jerry Parrish, said earlier this week that the state should be “concerned but not panicked” about the outbreak’s threat to the Florida economy.

The tourism industry, he said, could be particularly vulnerable.

The South Florida Sun Sentinel reported Wednesday that a Miami-based cruise ship was in limbo for hours because Jamaican authorities denied permission to allow passengers off the ship while authorities reviewed medical records to allay concerns that one of the ship’s crew members could have been infected.

In a statement, MSC Cruise said the fears were unfounded.

MORE NEWS: Coronavirus infects woman in Japan for the second time, a first in the country

Meanwhile, some Florida colleges and universities were suspending trips abroad.

The University of Central Florida said Thursday it was canceling study abroad programs to China, Hong Kong, South Korea and Mongolia, and were looking for study-abroad alternatives.

There have been very few cases reported in the United States, but federal health officials say they expect more cases.

The latest U.S. infection was reported in Northern California, where a patient was under special protection “because of an undiagnosed and suspected viral condition.” The case is especially perplexing because the patient had not traveled abroad and had no apparent contact with another known case, according to California officials.

The California case brings the total number infected in the United States to 60. Most of those cases are people evacuated from outbreak zones.

More than 81,000 cases of COVID-19 have occurred since the new virus emerged in China.

For more about the coronavirus in Florida, visit the Department of Health website.

FOX 35 News has all the latest on the coronavirus around the world.