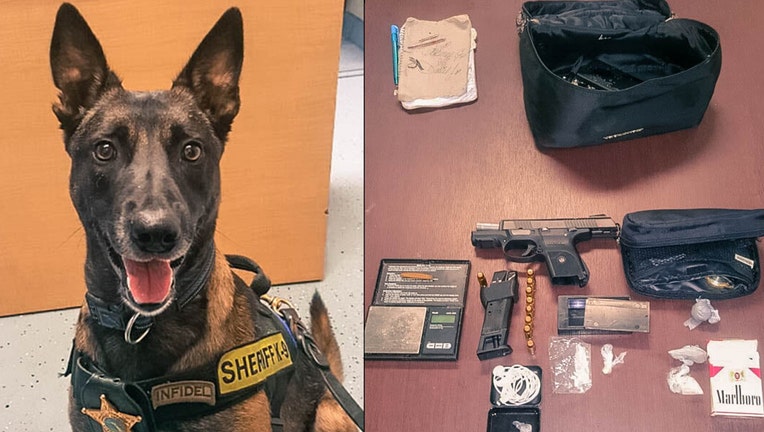 Getting drugs and criminals off the streets is all in a day's work for Hardee County Sheriff's Office K-9 Zeus.

On Nov. 6, a deputy stopped a vehicle that they said ran a red light in Zolfo Springs, the sheriff's office wrote on Facebook.
During the stop, the deputy recognized the passenger, Daniel Juarez, who they said had previous run-ins with the law. The deputy discovered that there was an active warrant out for Juarez for violation of probation for possession of methamphetamine.

The sheriff's office said K-9 Zeus sniffed the outside of the vehicle and alerted them to the presence of narcotics.

"Deputies searched the vehicle and located numerous amounts of drug equipment containing methamphetamine, a stolen firearm and a large amount of methamphetamine (approximately 13.1 grams without packaging). A notebook was also located containing the names of known drug users in the county and the dollar amounts they owed Juarez."

Juarez was booked into the Hardee County Jail on several charges, including possession of methamphetamine, violation of probation, possession of a weapon by a convicted felon and carrying a concealed weapon without a license. He was also charged with the intent to sell meth within 1,000 feet of a place of worship.

The sheriff's office praised Zeus for a job well done.

“Our K-9’s are one of our most valuable assets, especially in helping to rid our streets and community of dangerous drugs.”