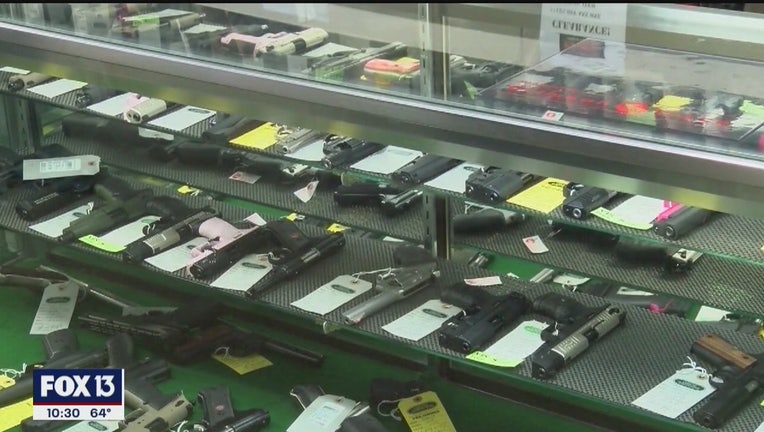 TALLAHASSEE, Fla. - The Florida Supreme Court will take up a closely watched case about a 2011 state law that threatens tough penalties if city and county officials approve gun-related regulations.

The court issued an order Thursday saying it will hear a challenge to the law, which was upheld in April by the 1st District Court of Appeal. A coalition of local governments and Agriculture Commissioner Nikki Fried brought the case to the Supreme Court in June.

Thursday’s order did not set a date for oral arguments.

Florida since 1987 has barred cities and counties from passing regulations that are stricter than state firearms laws, and the penalties in the 2011 law were designed to strengthen that "preemption." The law, for example, could lead to local officials facing $5,000 fines and potential removal from office for passing gun regulations.

"Taken together, Florida’s Constitution and statutes limit counties’ and municipalities’ powers of self-government by requiring consistency with legislatively enacted general and special laws," appeals court Judge Susan Kelsey wrote in a 14-page opinion joined by Judges Stephanie Ray and Brad Thomas. "As the trial court correctly noted and appellees (the local governments and officials) do not dispute, the Florida Legislature likewise is authorized to enact general laws preempting all regulation in an area of the law. As this case illustrates, the Legislature has exercised its preemption authority with respect to firearms and ammunition."

In a June 25 brief asking the Supreme Court to hear the case, attorneys for the challengers argued that local officials and governments "are entitled, under the Florida Constitution, to traditional legislative and governmental immunities that limit the Legislature’s authority to punish local lawmaking."

"It (the 1st District Court of Appeal ruling) also threatens fundamental principles of representative democracy enshrined in the Florida Constitution," the brief said. "Without these immunities, the risk of a subsequent, adverse judicial determination of preemption will chill the ability of local governments and their respective officials to fashion laws they reasonably believe are both necessary to protect public health and safety and not preempted."

But in an Aug. 2 brief, lawyers in Attorney General Ashley Moody’s office argued that the Supreme Court should not take up the case and said the state Constitution "expressly grants the Legislature plenary authority over the state’s local governments."

"In the decision below, the First District upheld statutory penalties for local officials who flout the Legislature’s preemption of local laws respecting firearms and ammunition. That decision is correct and consistent with both precedent and the text and structure of the Florida Constitution, which ‘establishes the constitutional superiority of the Legislature’s power over (local) power,’" the state’s brief said, partially quoting a Supreme Court precedent.

Attorneys for the local governments wrote in a 2019 court document that city and county officials had been urged to take actions after the Marjory Stoneman Douglas shooting. Those requests involved such things as requiring procedures or documentation to ensure compliance with background checks and waiting periods for gun purchases and requiring reporting of failed background checks.

But the attorneys said local governments refrained from going ahead with the proposals because of the potential penalties in state law. Along with officials facing the possibility of fines and removal from office, the law would allow members of the public and organizations to receive damages and attorney fees if they successfully sue local governments for improper gun regulations.