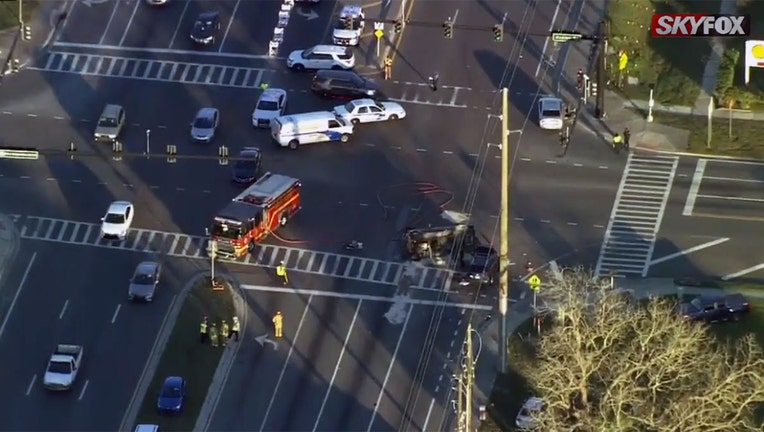 WINTER GARDEN, Fla. - An Orange County crossing guard seriously injured on Wednesday following a three-car crash in Winter Garden has been identified and is still in critical condition.

The incident reportedly occurred on Wednesday around 3:30 p.m. at the intersection of State Road 50 and Avalon Road. The crossing guard was pinned underneath a vehicle after walking children across the street. Investigators said that a vehicle hit another vehicle, which rolled over the crossing guard. She was left in critical but stable condition, while two others were injured.

An Orange County crossing guard is in critical but stable condition after a crash that left her pinned underneath a car.

On Thursday, Orange County Sheriff John Mina held a news conference about the incident. He wanted to pass the message along to drivers that they should "be careful and watch what they are doing while driving."

The crossing guard injured in the incident has been identified as Gislaine Booker. She has been employed by the Sheriff’s Office for almost two years and services students from Tildenville Elementary and Lakeview Middle schools. She is still in critical but stable condition. She has to have surgery and several of her bones are broken. Thankfully, she is receiving the same services that a deputy would if injured in the line of duty.

"We want to urge people to be very cautious and drive with extreme care, especially around our schools," Sheriff Mina said. "Speed and distracted driving are the most likely causes [of accidents]."

This is the second school crossing guard to be struck by a motorist within two days of school coming back into session, he added.

The investigation into the accident is ongoing and Sheriff Mina said it should be done within a couple of weeks.