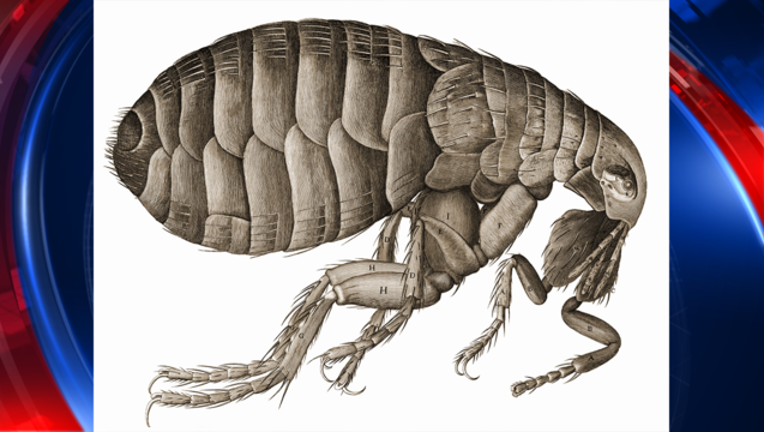 An illustration of a flea.(Photo Courtesy: National Library of Wales/Llyfrgell Genedlaethol Cymru)

Officials with Coconino and Navajo Counties have confirmed that fleas collected in their respective counties have tested positive for the Plague.

According to Public Health officials with Navajo County, fleas collected in the area of Taylor, a town approximately 16 miles (25.75 km) north of Show Low, tested positive for Yersinia pestis, in tests conducted by the Center for Pathogen and Microbiome Institute at Northern Arizona University.

The burrows where the fleas were found, according to the statement, are located on private property, and it will be treated. Residents nearby were also notified.

According to a statement released by Coconino County on Thursday, fleas collected in the Doney Park area and the Red Lake area tested positive for Yersinia pestis, in tests that were also conducted by the Center for Pathogen and Microbiome Institute at Northern Arizona University.

Residents in the area, according to the statement, were also notified. Officials in Coconino County also said because the Plague is endemic in Coconino County, there are likely other locations with infected fleas in the county.

Health officials in both Coconino and Navajo Counties say while an abundance of active prairie dogs is not an indication that the disease is present, a sudden die-off of prairie dogs and rodents may be an indicator of the Plague, and they are asking people who notice a sudden die off of rodents or rabbits to call their county's health department.

In addition, health officials are asking people to do the following, in an effort to reduce exposure risks:

Cats, according to health officials, are highly susceptible to the disease, and a sick cat should receive care by a veterinarian for a proper diagnosis, to reduce human exposure to the Plague.

In case of human illness, health officials say they should seek their physician immediately, as treatment with antibiotics is very effective.

CDC information on the Plague
https://www.cdc.gov/plague/