Authorities say a University of Central Florida student, driving under the influence, caused a deadly crash on Friday. Troopers with the Florida Highway Patrol say Dean Kornblum, 22, of Boca Raton, was driving east along University Boulevard when he rear-ended an SUV, causing it to flip. Its driver, Angel Dominguez, 36, died at the scene.

ORLANDO, Fla. - Dean Kornblum was not happy to see reporters waiting for him as he walked out of jail on bond Friday afternoon.  The 22-year-old University of Central Florida student is charged with DUI manslaughter.

Troopers with the Florida Highway Patrol say Kornblum was driving east on University Boulevard when he slammed into the back of a white Nissan SUV.

Lt. Chris Cribbs confirmed that 36-year-old Angel Dominguez died on the scene, and Kornblum was transported to the hospital with minor injuries.  In Kornblum’s arrest report, the trooper noted, “I heard Mr. Kornblum state to someone on the phone that he didn’t need to sober up because this situation was a joke.”   The News Station asked Kornblum if he still thought this was all a joke.

The report stated that Kornblum admitted to hospital staff that “he drank alcohol today” going on to saying if the hospital finds anything in is blood tests “it’s because they put it in his system.”  The trooper noted Kornblum had glassy bloodshot eyes, and she could smell the odor of an alcoholic beverage.  Kornbloom refused to follow the nurse’s instructions, and when talking to hospital staff he would laugh loudly and obnoxiously authorities say. 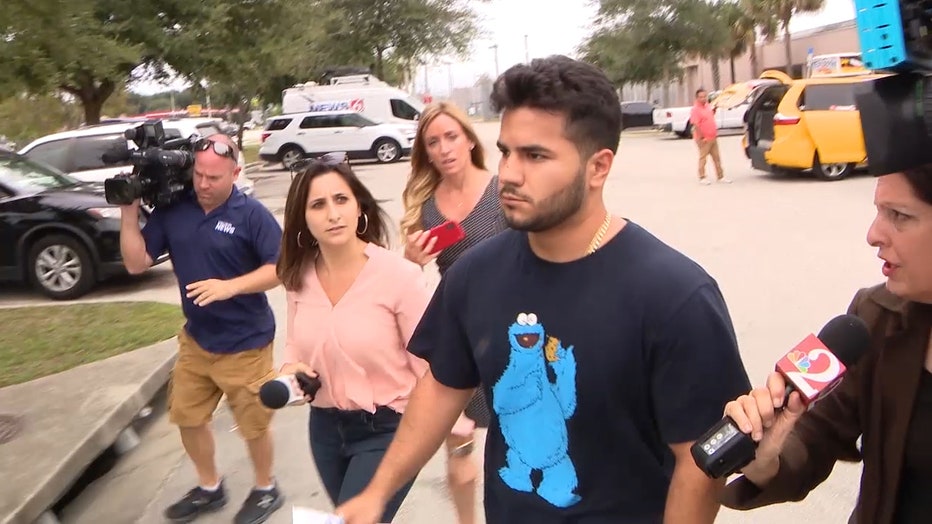 When The News Station continued to press Kornblum about what happened early Friday morning and his alleged behavior, he wouldn’t talk about any of it.

Pieces of his 2019 Audi and the victim’s Nissan were scattered down the side of the University Boulevard.  Among the mix of tattered Nissan parts,  a baby’s toy. Dominguez’s wife answered the door at their Orange County apartment on Friday morning, holding a small baby.  She was too shocked and sad to talk about the loss of her husband.