WASHINGTON - Federal Communications Commission Chairman Ajit Pai announced Thursday that he intends to “move forward with a  rulemaking to clarify the meaning of Section 230,” a statute that effectively shields internet companies from liability for the content posted by users on their platforms.

Section 230 is found under the Communications Decency Act of 1996, providing legal immunity and protections from liability for anything posted on internet companies’ websites.

The law says that "No provider or user of an interactive computer service shall be treated as the publisher or speaker of any information provided by another information content provider." (47 U.S.C. § 230).

RELATED: Section 230: What the law is and why Trump wants to repeal it

But the law also allows owners of websites to remove content they deem offensive or inappropriate.

Earlier this month, President Donald Trump called for a repeal of the law.

Trump met with Republican state attorneys general in late September to discuss Section 230 after the Justice Department unveiled a legislative proposal aimed at reforming the law, according to the Washington Post.

The president signed an executive order in May directing executive branch agencies to ask independent rule-making agencies, including the FCC and the Federal Trade Commission, to study whether they can place new regulations on social media companies. 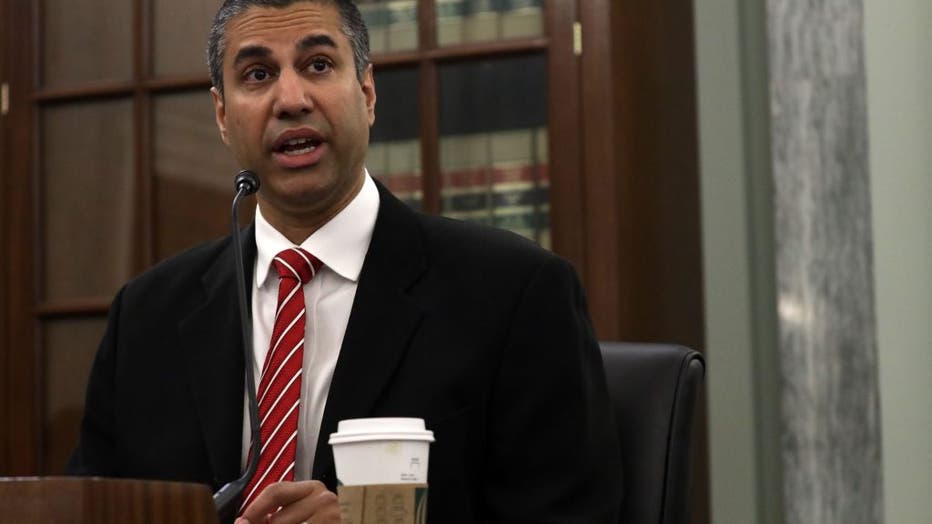 A similar executive order was previously considered by the administration, but shelved over concerns it couldn’t pass legal muster and that it violated conservative principles on deregulation and free speech.

Trump has had ongoing disputes with both companies over fact-checks placed on the president’s posts.

Trump has argued the fact-checks are “editorial decisions” by Twitter amounting to political activism and that such actions should cost social media companies their liability protection for what is posted on their platforms.

Trump, who heavily uses Twitter, has long accused the tech giants Silicon Valley of targeting conservatives by fact-checking them or removing their posts.

“They’ve had unchecked power to censor, restrict, edit, shape, hide, alter virtually any form of communication between private citizens or large public audiences,” Trump said in May of social media companies. “There is no precedent in American history for so small a number of corporations to control so large a sphere of human interaction.”

Trump has accused Twitter of “interfering in the 2020 presidential election” and declared “as president, I will not allow this to happen.” His former campaign manager, Brad Parscale, said Twitter’s “clear political bias” had led the campaign to pull “all our advertising from Twitter months ago.” In fact, Twitter has banned political advertising since last November.

On the other hand, Facebook CEO Mark Zuckerberg shared a different position on the matter. In May, he told FOX News that his platform has “a different policy, I think, than Twitter on this.”

“I just believe strongly that Facebook shouldn’t be the arbiter of truth of everything that people say online,” he said.

Both Facebook and Twitter have said that they have no business interest in favoring one political party over the other.
But trouble began in 2016, two years after Facebook launched a section called “trending,” using editors to curate popular news stories. Zuckerberg met with prominent right-wing leaders at the time in an attempt at damage control, and in 2018, Facebook shut down the “trending” section.

In August 2018, Trump accused Google of biased searches and warned the company to “be careful.” Google pushed back sharply, saying Trump’s claim wasn’t true, and experts suggested his comments showed a misunderstanding of how search engines work.

Facebook announced in October that it would ban groups that “represent” QAnon, a baseless conspiracy theory that paints Trump as a secret warrior against a supposed child-trafficking ring run by celebrities and "deep state' government officials.

Meanwhile, tech companies have been working to combat misinformation around the November election and the coronavirus pandemic.

In August, Facebook removed a video posted by President Donald Trump for promoting false and misleading information about the coronavirus pandemic, in which the president claimed in an interview on “Fox & Friends” that the novel coronavirus will “go away like things go away,” and that children are “almost, and I would almost say definitely” immune to the disease.

Earlier this month, a post by the president in which he claimed that the ongoing COVID-19 pandemic is not as deadly as the flu was removed by Facebook and flagged by Twitter for violating the social media platforms’ rules, the companies said.

Both Twitter and Facebook have rolled out dozens of new rules to avoid a repeat of the false postings about candidates and the voting process that marred the 2016 election.

Facebook implemented a policy in August in which pages with political ties would no longer be able to promote themselves as news publishers on the platform.

Google also announced a similar move, saying that starting in September, it would ban politically motivated advertisers disguising themselves as local news websites, according to Axios.