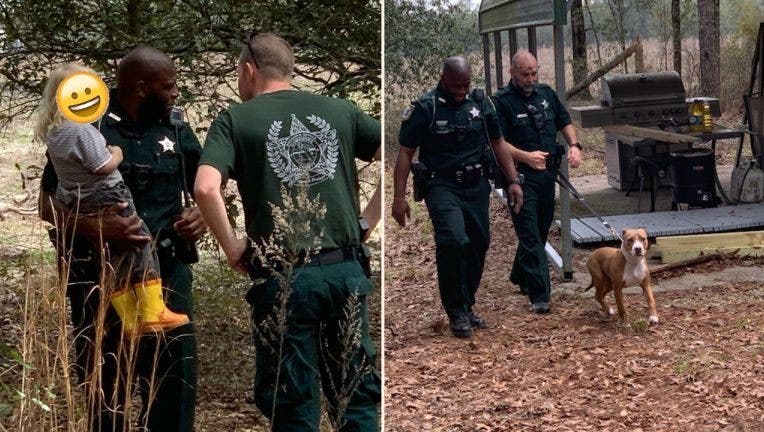 A family dog in Florida has been hailed as a very good boy after he followed a 3-year-old -- who accidentally wandered into the woods and got lost Tuesday -- and protected the child until they were found by police.

A woman in Suwannee County, located about 150 miles south of the Georgia border, called 9-1-1 Tuesday and told dispatchers her 3-year-old son was playing outside with his siblings and wandered away, the sheriff’s office said in a Facebook post. The family’s dog, Buddy, was also missing, she told the dispatcher.

Suwannee County Sheriff's Office patrol deputies and investigators responded to the home and began to look for the child. Suwannee Correctional Institution K9 units were also called in to aid in the search.

As the search was underway, a nearby neighbor called 9-1-1 to report he had found a small child and a dog in the woods by his house. The man told the dispatcher the dog wouldn’t let him approach the boy.

“Fortunately, we were able to reunite the child with his mother, thanks in part to 'man's best friend' and an alert neighbor,” Suwannee County Sheriff's Office said in its Facebook post. The office used the hashtags “give that dog a bone,” “man’s best friend,” and “Lassi ain’t got nothing on Buddy.”