SAN FRANCISCO - Facebook on Thursday said it removed ads run by President Donald Trump’s re-election campaign featuring an upside down red triangle similar to one used by Nazis to mark political prisoners for violating its policy on organized hate.

The ads called on supporters "to sign a petition and "stand with your President and his decision to declare ANTIFA a Terrorist Organization.“ They were placed on Facebook pages for Trump, Vice President Mike Pence and the official “Team Trump” page.

“Dangerous MOBS of far-left groups are running through our streets and causing absolute mayhem,” the ad reads. “They are DESTROYING our cities and rioting - it’s absolute madness.”

Similar to the triangle featured in the ads, an inverted red triangle was once used to designate political prisoners in Nazi concentration camps, according to the U.S. Holocaust Memorial Museum.

On Thursday, Facebook confirmed the platform had removed the ads for the Nazi connection.

“We removed these posts and ads for violating our policy against organized hate,” a company spokesman said. “Our policy prohibits using a banned hate group’s symbol to identify political prisoners without the context that condemns or discusses the symbol.” 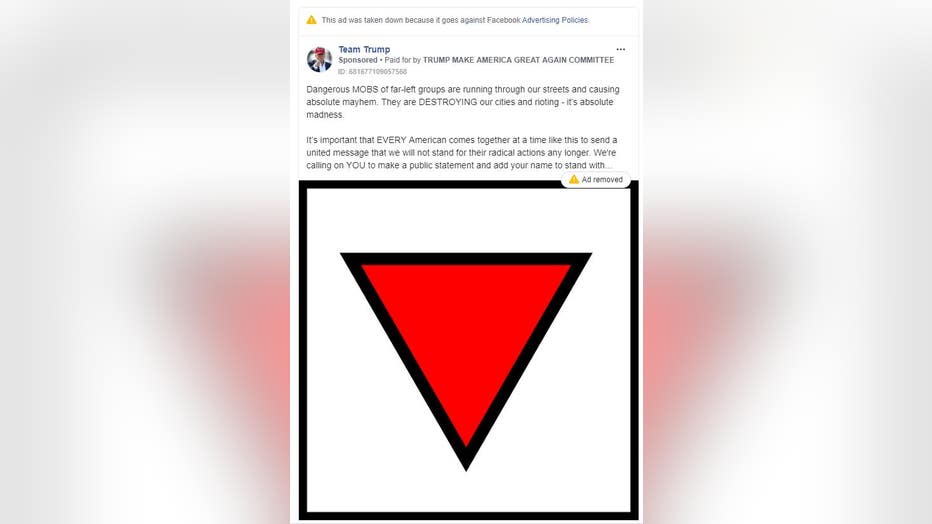 The Trump campaign did not immediately respond to a request for comment. But campaign spokesman Tim Murtaugh told the Washington Post that the red triangle “is an antifa symbol,” pointing to examples of iPhone cases and water bottles branded with the symbol.

More common symbols of the anti-fascist movement include three downward arrows and a side-by-side red and black flag, according to the Anti-Defamation League.

The anti-hate organization said the use of the symbol is “offensive and deeply troubling.”

“Whether aware of the history or meaning, for the Trump campaign to use a symbol – one which is practically identical to that used by the Nazi regime to classify political prisoners in concentration camps — to attack his opponents is offensive and deeply troubling,” Jonathan Greenblatt, CEO of the Anti-Defamation League, said in a statement. “It is not difficult for one to criticize their political opponent without using Nazi-era imagery.”

“We implore the Trump campaign to take greater caution and familiarize themselves with the historical context before doing so. Ignorance is not an excuse for appropriating hateful symbols,“ Greenblatt added.

Bend the Arc: Jewish Action, a progressive advocacy group, also denounced the use of the symbol in campaign advertising.

“This isn’t just one post,” the advocacy group wrote on Twitter. “This is dozens of carefully targeted ads from the official pages of Mike Pence, Donald Trump, and Team Trump. All paid for by Trump and the Republican National Committee. All spreading lies and genocidal imagery.”