Family and friends of a beloved teenager killed in a crash held a prayer vigil on Tuesday.

NEW SMYRNA BEACH, Fla. - Family and friends of a beloved teenager killed in a crash held a prayer vigil on Tuesday.

Siddharth Sukhdeo, 17, was traveling home from Orlando early Sunday with his mom and dad when an alleged drunk driver slammed into them on State Road 44 near Interstate 95.

About 200 people were in attendance for the vigil at Halifax Medical Center in Daytona Beach. Sukhdeo’s mother is being treated at the hospital for injuries from that crash. His father left her side to thank the people who came to pay their respects.

"The hardest thing, when we got hit and the trunk was caved in, and the third row was in the second row of the van, who do I save?" he said. 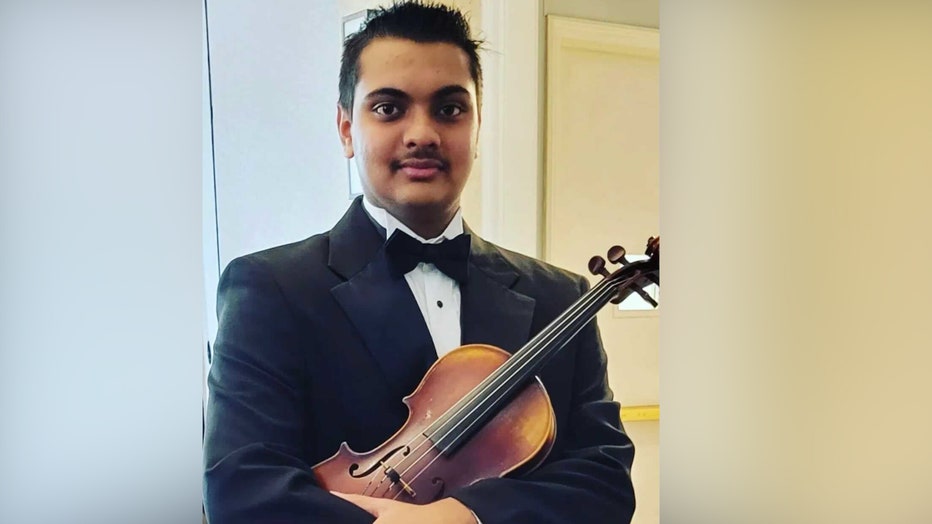 It’s the question no father ever wants to have to ask, but one Satesh Sukhdeo faced on Sunday night.  His son died that night

Sukhdeo's classmates honored him with chants from the high school band.

"I just completely broke down, started screaming and crying, but I knew I had to stay strong, and then I started calling everybody else," said friend and classmate Arbelyn Rivera.

Family and friends of a beloved teenager killed in a crash held a prayer vigil on Tuesday.

Dick Cuchetti taught Sukhdeo at the Cuchetti School of Music for 11 years. He said he was a shining light.

"He was always positive. He never ragged anyone. He loved everybody. Everybody loved him. Next year he was supposed to be the drum major of the NSB band," he said.

Police arrested 32-year-old Michael Miles and charged him with DUI manslaughter. FOX 35 News has learned he posted his $150,000 bond and is out of jail.

On Tuesday evening, the State Attorney's Office had filed a motion to revoke his bond.

Sukhdeo’s mom was sitting in the back seat with her son when they were rear-ended.  His dad said she is recovering from surgery to repair eight broken ribs.

"Sid was incredible. Sid was selfless, and he never wanted to see anyone in need," said Sukhdeo of his son.

Another vigil is planned for Thursday at 8 p.m. at the Brannon Center in New Smyrna Beach.