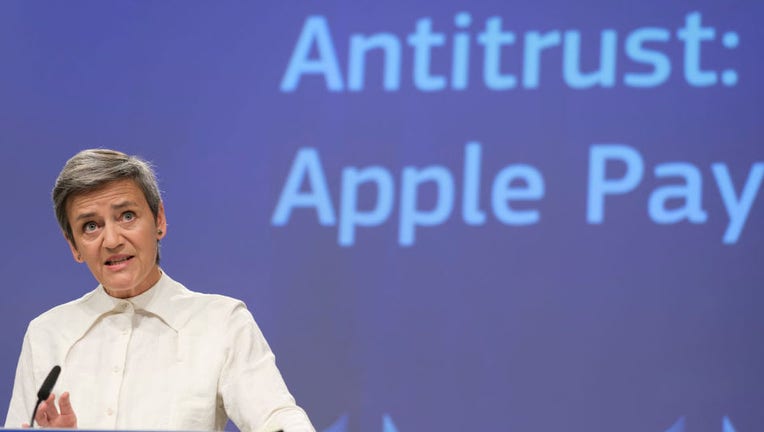 Executive Vice President of the European Commission for A Europe Fit for the Digital Age Margrethe Vestager talks to media at the EU Commission headquarter on May 2, 2022 in Brussels, Belgium. (Thierry Monasse/Getty Images)

BRUSSELS - The European Union stepped up its antitrust case against Apple on Monday, accusing the company of abusing its dominant position by limiting access to technologies allowing contactless payment.

The 27-nation bloc's executive arm, the European Commission, has been investigating Apple since 2020. The commission’s preliminary view is that the firm is restricting competition by preventing mobile wallet app developers from accessing the necessary hardware and software on Apple devices.

Mobile wallets rely on near-field communication, or NFC, which uses a chip in the mobile device to wirelessly communicate with a merchant’s payment terminal.

The commission said Apple Pay is by far the largest NFC-based mobile wallet on the market and accused the company of refusing others access to the popular technology.

"Apple has built a closed ecosystem around its devices and its operating system, iOS. And Apple controls the gates to this ecosystem, setting the rules of the game for anyone who wants to reach consumers using Apple devices," EU competition commissioner Margrethe Vestager said. "By excluding others from the game, Apple has unfairly shielded its Apple Pay wallets from competition."

The commission didn't say how big the fines could be if the charges against Apple were ultimately upheld.

Apple responded in a statement that it "will continue to engage with the Commission to ensure European consumers have access to the payment option of their choice in a safe and secure environment."

The commission said the practice "has an exclusionary effect on competitors and leads to less innovation and less choice for consumers for mobile wallets on iPhones." It said it sent a Statement of Objections to Apple over its practices, a formal step in its investigations into suspected violations of EU antitrust rules.

The case is one of several investigations opened by the EU targeting Apple. EU regulators are also looking into whether the company has been violating the bloc’s antitrust laws by distorting competition for music streaming by imposing unfair rules for rival services in its App Store.

The commission said Apple Pay is the only mobile wallet solution that may access the necessary NFC input on iOS and blamed Apple for not making it available to third-party app developers.

Apple responded by saying its digital wallet service "is only one of many options available to European consumers for making payments, and has ensured equal access to NFC while setting industry-leading standards for privacy and security."

Vestager said the EU takes security issues very seriously, but insisted that the bloc's investigation didn't reveal evidence that security risks would increase if access were to be granted to third parties.

"On the contrary, evidence on our file indicates that Apple’s conduct cannot be justified by security concerns," she said.

Lorne Cook in Brussels, and Kelvin Chan in London, contributed to this report.