Election Day in the United States is finally here.

Millions of voters are heading to the polls Tuesday to cast ballots in the race between President Donald Trump and Democratic nominee Joe Biden, as well as other key races that could potentially shift the balance of power in the U.S. Senate.

While plenty of Americans were expected to vote in person on Nov. 3, nearly 100 million people in America had already voted by the time polls opened in an election that has been reshaped by the coronavirus pandemic and its economic fallout, as well as a racial reckoning.

In an attempt to recreate his victorious Election Day routine from 2016, Trump phoned into "Fox & Friends" Tuesday morning. The interview featured his typical campaign banter, but he left the show by musing he'd garner more than the 306 electoral votes he earned four years ago.

In an effort to recreated his 2016 Election Day routine, President Donald Trump phoned into Fox and Friends on Tuesday morning.

The president plans on spending his evening in the White House, waiting for results to roll in.

More than 100 staffers, almost all wearing masks, lined up against the back wall of the Republican National Committee’s annex in Arlington, Virginia to hear from Trump. Some masks were emblazoned with “Trump” and “MAGA” for Trump’s “Make America Great Again” campaign slogan.

He said his campaign was doing well in states like Florida, Arizona and Texas. He noted the importance of winning Pennsylvania, according to the Associated Press.

In Pennslyvania, Biden  spent the morning on a nostalgia trip. Accompanied by his grandchildren, Biden visited his childhood home in Scranton.

More than 100 people stood in the streets and chanted his name.

Inside, he autographed one of the walls, writing "From this house to the White House, by the grace of God. Joe Biden 11-3-2020." 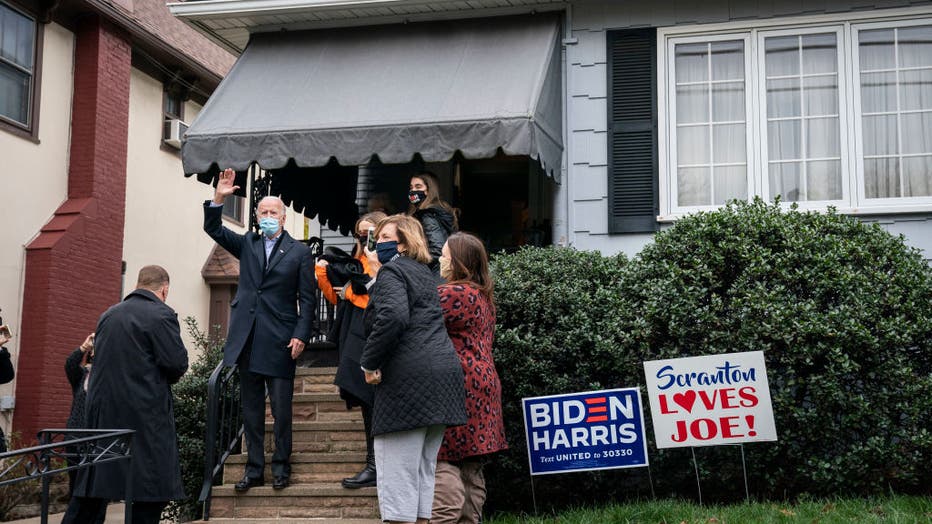 Democratic presidential nominee Joe Biden waves to onlookers from the steps of his childhood home on Nov. 03, 2020 in Scranton, Pennsylvania.(Photo by Drew Angerer/Getty Images)

Later in the day, Biden moved on to Philadelphia where he spoke with even more supporters. The city has served as the backdrop of some of Biden's most significant speeches.

Biden will finish his night in Delaware, where he currently resides.

In the final days of the race, Trump has campaigned in important regions across the country, holding packed rallies and downplaying the threat of COVID-19. He criticized Democratic leaders who have imposed limits on gatherings to help combat the spread of the virus, which has killed more than 231,000 Americans as new cases continue to rise nationwide.

Trump has touted his administration’s response to the pandemic during his first term, highlighting his own recovery from COVID-19 and claiming the crisis “is going away” during the final presidential debate. He has also campaigned on the promise of a soon-to-come vaccine.

His rival, Biden, has said he would heed the advice of scientists if elected to the White House and pledged to work with state and local officials across the country to push mask mandates.

On Monday, Trump spent the final day of campaigning sprinting through five rallies, from North Carolina to Wisconsin. Beyond Ohio, Biden was devoting most of his time to Pennsylvania, where a win would leave Trump with an exceedingly narrow path to victory.

Biden emphasized the pandemic in his election-eve messaging to voters. He declared that "the first step to beating the virus is beating Donald Trump,” and he promised he would retain the nation’s leading infectious disease expert, Dr. Anthony Fauci, whom the president has talked of firing.

Trump, meanwhile, touted the nation's economic rebound in the July-September quarter and the recent confirmation of Supreme Court Justice Amy Coney Barrett — tipping the court to a 6-3 conservative majority.

Trump also assailed a decision that allows Pennsylvania’s elections officials to count mailed ballots that are received in the three days after Tuesday’s election. The high court refused to block the Pennsylvania Supreme Court decision, which ordered the extension until Nov. 6.

Both campaigns have insisted they have a pathway to securing the necessary 270 Electoral College votes required to win the presidency, though Biden’s options have appeared more plentiful, according to recent polling. The Trump campaign is banking on a surge of enthusiasm from his most loyal supporters turning out to vote in person on Election Day.

Traditionally, Republicans have had high turnout in the weeks before Election Day. But Trump has made repeated, unfounded claims this year about the risk of widespread fraud with mail-in voting, while Biden's campaign has urged supporters to vote early, whether by mail or in person.

Joe Biden speaks to supporters on morning of Election Day

Democratic Presidential Nominee Joe Biden spoke to supporters in Pennsylvania on the morning of Election Day.

Early turnout this year has consisted of far more Democrats (21 million) than Republicans (14 million), according to U.S. Elections Project data compiled Monday. But both parties anticipate a swell of Republican votes on Election Day that could dramatically shift the dynamic.

Polls begin to close Tuesday at 6 p.m. ET in Kentucky and Indiana, with most closing between 8 and 9 p.m. ET. The last polls will close at 1 a.m. ET in Alaska.

Late Tuesday afternoon, cybersecurity officials at the Department of Homeland Security said there had been no apparent signs of any malicious cyber activity — just the usual technical glitches and routine issues.

And as results begin to filter in on election night, officials have stressed for months that the vote-counting timeline is expected to be somewhat delayed. America may not know who won the presidential race on Tuesday night — which is not unusual. In 2016, Trump was not declared the winner until early in the morning after Election Day.

This year, the biggest factor that may slow things down is the sheer volume of mail ballots, which take longer to count. Election workers must remove the ballots from their envelopes, check for errors, sort them and flatten them — all before they can be run through scanners the moment polls close and be tabulated.

In states with established vote-by-mail programs, this processing happens weeks before Election Day. But several states did not have this system in place before the pandemic and laws on the books prohibited election officials from processing the ballots well in advance of Election Day.

Without a head start, there's virtually no way to process and count all the mail votes on Election Day, while also counting all the in-person votes.

“It’s going to take a while,” Commissioner Ellen L. Weintraub with the Federal Election Commission predicted in August. “There are some states that are very used to it and will be able to count up all the votes very quickly. Other states are not used to having that level of absentee voting.”

Results from the presidential contest could come in sooner than anticipated if there is an overwhelming vote for one candidate versus another, Weintraub said. But if it’s a close race, then we’re just going to have to wait.

“It’s more important to get it right than to get it fast,” Weintraub added.