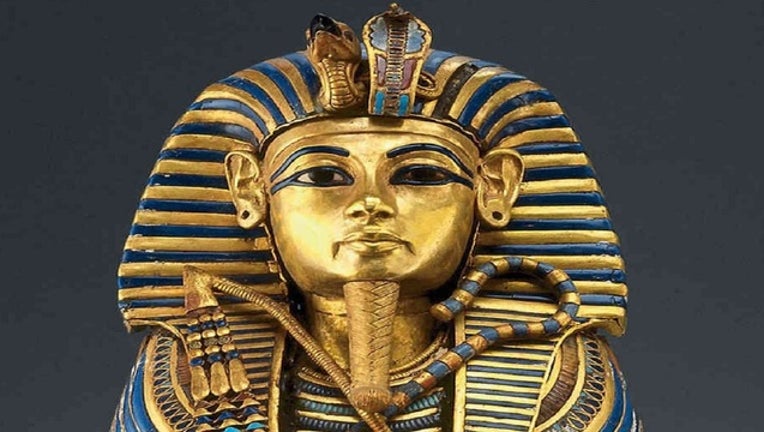 LUXOR, Egypt (AP) — King Tut's tomb may contain hidden chambers, Egypt's antiquities minister said Tuesday, lending support to a new theory that a queen may be buried in the walls of the 3,300 year-old pharaonic mausoleum.

While touring the burial sites of Tutankhamun and other pharaohs in the famed Valley of the Kings, Minister Mamdouh el-Damaty said he will seek final approval for the radar inspection of the tomb.

El-Damaty was visiting Luxor with British Egyptologist Nicholas Reeves, who recently theorized that Tutankhamun, popularly known as King Tut, who died at the age of 19, may have been rushed into an outer chamber of what was originally the tomb of Queen Nefertiti.

He said high-resolution images of what is known as King Tut's tomb "revealed several very interesting features which look not at all natural, features like very, very straight lines which are 90 degrees to the ground, positioned so as to correspond with other features within the tomb."

These features are difficult to capture with the naked eye, he said.

Reeves said the plastered walls could conceal two unexplored doorways, one of which perhaps leads to Nefertiti's tomb. He also argues that the design of the tomb suggests it was built for a queen, rather than a king.

"I agree with him that there's probably something behind the walls," el-Damaty said. But he said if anyone is buried there it is likely Kia, believed by some Egyptologists to be King Tut's mother.

Nefertiti, who was famed for her beauty and was the subject of a famous 3,300 year-old bust, was the primary wife of the Pharaoh Akhenaten, who introduced an early form of monotheism. Akhenaten was succeeded by a pharaoh referred to as Smenkhare and then Tut, who is widely believed to have been Akhenaten's son.

"Nefertiti disappears... according to the latest inscriptions just being found," said Reeves, explaining his theory inside King Tut's tomb. "I think that Nefertiti didn't disappear, she simply changed her name."

After Nefertiti died, Tut was responsible for burying her, and then when he died someone decided to extend the tomb, Reeves suggested. "I think since Nefertiti had been buried a decade before, they remembered that tomb was there and they thought, well, perhaps we can extend it," he said.

Any discovery would provide more information about this turbulent time in ancient Egypt.

"Akhenaten's family is full of secrets and historical issues that have yet to be resolved," el-Damaty said.