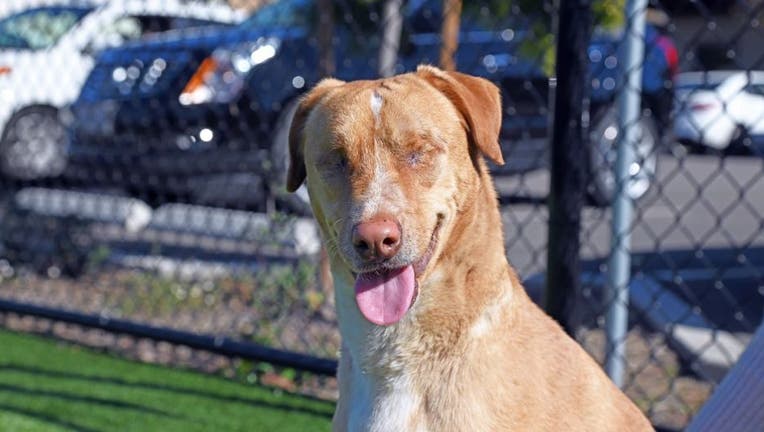 CALIFORNIA - Louis is getting a new start with a new family.

The 3-year-old Lab/shepherd mix, whose eyes were removed after a bad infection was left untreated, has been adopted by Marine veteran Steve Walker, his wife Kacey Walker, and their daughter Jordan.

"Meet Louis' Family, the Walkers!" the Helen Woodward Animal Center wrote on Facebook. "When the week began, we knew we needed to find the perfect family for this loving dog. We believe the Walkers represent that and even more."

RELATED: Owners who had dog’s eyes removed instead of treating eye infection surrender pet to shelter

According to the center, Louis’ new dad, Steve Walker, began to lose his sight at the age of 18 due to a rare eye disease. That hasn’t slowed him down one bit and is an active participant in marathons, triathlons, and even the World Championship Ironman in Kona, Hawaii.

Louis will also share the house with other rescue pets, including a bulldog named Dragon and a bunny named Honey.

"Our pets are so loved and spoiled," Jordan said in a statement about Louis' adoption according to People.  "We just know that Louis is going to be the perfect addition to our pack."

Louis was taken in by the Helen Woodward Animal Center in California after being surrendered to a shelter. Before that, the center says his former family didn’t seek treatment for a serious eye infection until it was too late and both of Louis’ eyes had to be removed. Following the surgery, the blind dog was hit by a car and broke his leg.

The final heartbreak for Louis, the center says, was that "unwilling to care for a blind and injured dog, his owners surrendered Louis to a Calexico area shelter, where he luckily received urgent surgery to repair his leg."

Louis’ story went viral and the center said they received "hundreds of calls and emails" from people all over the world and received $12,000 in donations in one day.