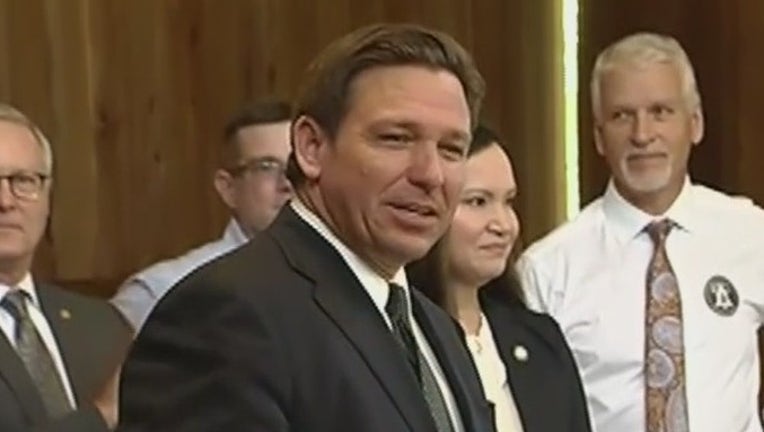 TALLAHASSEE, Fla. - Gov. Ron DeSantis on Tuesday vetoed a congressional redistricting plan passed by the Legislature and said he was calling lawmakers back to Tallahassee in April to draw lines without a "racially gerrymandered" district in North Florida.

DeSantis, who had previously announced he would veto the redistricting plan (SB 102), called a special session from April 19 to April 22. DeSantis told reporters a map passed by the Legislature this month violated the Equal Protection Clause of the U.S. Constitution.

"Clearly, this is the Legislature and in this case the governor’s prerogative, since I have to put my signature on it, to do this (create a congressional map)," DeSantis said. "We are not going to have it drawn by a court. I think we all agree that we have to work through this."

DeSantis said he would leave it up to legislative leaders to decide if other topics would be added to the special session. This year’s regular session ended March 14, and lawmakers have faced requests to deal with issues such as problems in the state’s property-insurance market.

"I would love to have property insurance. I'd love to have data privacy, I'd love to have constitutional carry (of handguns). There's a lot of great things," DeSantis said. "But you know, we just went through a legislative session where they failed to deliver on some of those priorities."

Senate President Wilton Simpson, R-Trilby, and House Speaker Chris Sprowls, R-Palm Harbor, issued a joint statement that said they looked forward to crafting a congressional map that can be supported by lawmakers and DeSantis.

"For the first time in nearly a century, the Legislature’s (state House and Senate) maps were not challenged by a single party, and earlier this month were declared valid by the Florida Supreme Court," the joint statement said. "Unlike state legislative maps, the congressional map requires approval by the governor, and Gov. DeSantis has vetoed the legislation we passed earlier this month. Our goal is for Florida to have a new congressional map passed by the Legislature, signed by the governor and upheld by the court if challenged. Therefore, it is incumbent upon us to exhaust every effort in pursuit of a legislative solution."

DeSantis has focused, at least in part, on revamping Congressional District 5, which stretches from Jacksonville to west of Tallahassee and was designed in the past to help elect a Black candidate. Democrat Al Lawson, who is Black, holds the seat.

A memo from Ryan Newman, DeSantis’ general counsel, said the Legislature’s approach to redrawing District 5 would violate the Equal Protection Clause because it "assigns voters primarily on the basis of race but is not narrowly tailored to achieve a compelling state interest."

DeSantis, who has taken the unusual step for a governor of pushing his own map designs, said that "certainly most conservative lawyers who look at these issues, you know, agree with this analysis." He has argued District 5 should be condensed in the Jacksonville area.

Lawson issued a statement Tuesday that said DeSantis had "made it clear that his ultimate objective was to cut the number of African-Americans and Hispanic-Americans serving in Congress, so today’s veto is no surprise." Lawson also alluded to the history of the Equal Protection Clause, which took effect after the Civil War.

"The fact that DeSantis justifies his goal to create racial disparities in congressional representation by citing the constitutional amendment created following the Civil War for the very purpose of remedying those same disparities is absurd and will be soundly rejected by any credible judge," Lawson said.

Another issue in the debate about the new congressional map has been the "Fair Districts" constitutional amendments, which voters passed in 2010 to try to prevent gerrymandering. DeSantis contends that the way lawmakers have interpreted the Fair Districts amendments doesn’t comply with the U.S. Constitution.

Trying to satisfy DeSantis, lawmakers passed an unusual plan (SB 102) that included a primary congressional map and a backup map.

The primary map took a similar approach to a plan DeSantis crafted to revamp District 5 and place it in the Jacksonville area. The Legislature’s backup map would be more in line with what the Senate originally proposed, keeping District 5 closer to its current configuration.

But the DeSantis administration has taken issue with both proposals. Under the Legislature’s primary map, an effort to maximize the Black voting population of District 5 resulted in neighboring District 4 taking on "a bizarre doughnut shape that almost completely surrounds District 5," according to Newman’s memo.

The new lines must be in place by mid-June, ahead of congressional qualifying for the August primary and November General Election.

Proposals pushed by DeSantis could be more favorable to Republicans than the Legislature’s plans.

Based upon 2020 voting patterns, the Legislature’s proposals would make 18 of the 28 congressional seats favorable to Republicans. Currently, Republicans hold a 16-11 edge in the delegation, which is adding a seat because of the state’s population growth over the past decade.

Under designs pushed by DeSantis, 20 seats would lean toward the GOP.

Amid the uncertainty, lawsuits have been filed in state and federal courts calling on judges to draw congressional districts. DeSantis said he anticipates the courts will put the lawsuits on hold as lawmakers prepare to meet in the special session.