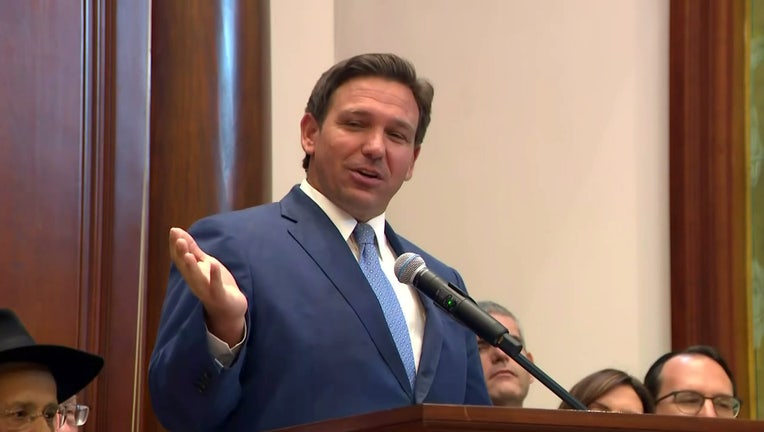 TALLAHASSEE, Fla. - Touting the measure as a way of allowing students to "reflect and be able to pray as they see fit," Gov. Ron DeSantis on Monday signed a bill that will require public schools to hold moments of silence at the beginning of each day.

DeSantis signed the bill (HB 529), which will institute one- to two-minute moments of silence in public school classrooms, at The Shul of Bal Harbour, a Jewish community center.

"The idea that you can just push God out of every institution and be successful, I’m sorry, our Founding Fathers did not believe that," DeSantis said, shortly before signing the measure behind a placard that read "protect religious liberty."

When the law goes into effect July 1, public-school principals will be required to direct first-period teachers to institute moments of silence.

The new law also will mandate that teachers can’t "make suggestions as to the nature of any reflection that a student may engage in during the moment of silence," and students "may not interfere with other students' participation."

Teachers also will be required to encourage parents to talk with students about the moments of silence and "to make suggestions as to the best use" of the time.

While speaking at the Jewish community center in Miami-Dade County, DeSantis and Republican allies focused heavily on the bill allowing for silent prayer. Lt. Gov. Jeanette Nunez said the bill will "allow for religious freedom and allow for students to have a minute or two at the start of their day."

The tone at the event was a departure from earlier comments by the bill’s sponsors that the measure was not explicitly aimed at allowing prayer.

Senate sponsor Dennis Baxley, R-Ocala, defended the measure during a Senate floor debate in April by saying the bill is aimed at giving school children a silent, uninterrupted moment "just to stop and reflect."

House sponsor Randy Fine, R-Brevard County, similarly argued in February that the proposal would not push religion on public-school students.

Rep. Omari Hardy, a West Palm Beach Democrat who voted against the bill, accused the  Republican sponsors of misrepresenting the intent behind the measure.

"The Republican who sponsored the bill said that it wasn't about prayer in school. (Of course it was!) But when you question their motives, or their honesty, it's called a personal attack & deemed out of order. No. The Republicans lie, and we need to call them on it every time," Hardy said in a tweet Monday.

The bill (HB 805), which also is set to go into effect July 1, will allow the volunteer ambulances to use emergency lights when responding to calls. Only services that have been operating in the state for a decade or more are eligible.

DeSantis said the measure supports volunteer ambulance services with a "proven track record" like Hatzalah, a non-profit that provides services in South Florida.

"These services are critical for Holocaust survivors who have a fear of uniforms and of being taken away," a news release about the bill from DeSantis’ office said Monday. "Members are trained to treat patients according to Jewish law."

Nunez told the crowd that both bills DeSantis signed are "a testament to our continued support and our continued prioritization of issues that are important to the Jewish community."

Rep. Mike Caruso, a Delray Beach Republican who sponsored the ambulance bill, likened it to the bill mandating a moment of silence.