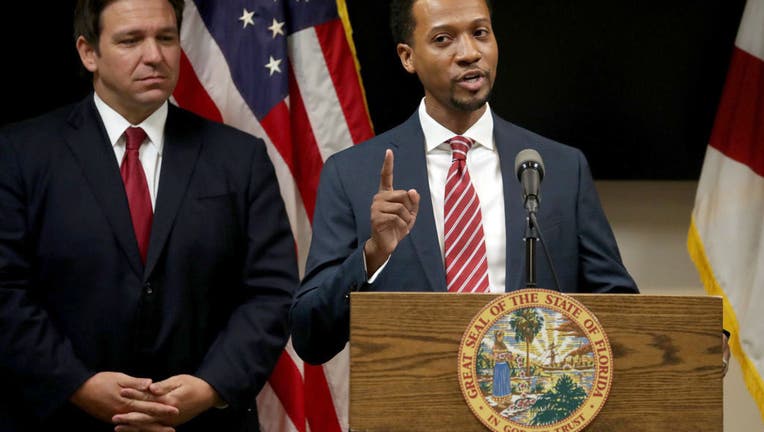 FORT LAUDERDALE, Fla. (AP) - Four school board members appointed by Republican Gov. Ron DeSantis in one of Florida’s most Democratic counties were sworn into office on Tuesday. They replace the elected Broward County board members DeSantis suspended after a grand jury investigating the massacre at Marjory Stoneman Douglas High School found widespread wrongdoing.

The state’s Department of Education on Monday voiced "significant concerns" about the school system’s actions before, during and after the shootings of 17 people by Nikolas Cruz, a troubled former student who attacked the high school’s campus on Valentine’s Day in 2018.

In a letter sent to Superintendent Vickie Cartwright, the state cited the grand jury’s finding of mismanagement of the $800 million voter-approved bond to renovate schools, the underreporting of criminal activity to the state, the district’s "almost fanatical desire to control student data" and use it to manipulate public perception, and the practice of allowing students with serious felonies back on school campuses.

The district is the nation’s sixth-largest, with more than 270,000 students at 333 campuses and an annual budget of $4 billion.

District spokesman John Sullivan told the South Florida SunSentinel that the district plans to fully cooperate with the state.

Torey Alston, Manuel "Nandy" A. Serrano, Ryan Reiter and Kevin Tynan were sworn in Tuesday morning before a special meeting to elect a new chairperson. All four are registered Republicans, as is recent DeSantis appointee Daniel Foganholi, giving the governor’s party a brief period of control over the school board in a heavily Democratic county.

"What Governor DeSantis did is un-American and undemocratic. He doesn’t care about democracy and overturned the will of the voters," Levinson said in a statement. She said DeSantis wants to remove anyone who supported former Superintendent Robert Runcie and blame the shooting on them. Runcie resigned after he was indicted for allegedly lying to the grand jury. He has pleaded not guilty and is awaiting trial.

Three of their positions, along with the seat now occupied by Foganholi, are up for grabs in the November election.

Tynan said the short tenure for himself, Serrano and Reiter adds a sense of urgency to bring change.

"It’s our challenge, especially those who are short-timers to see what can get done in that short term," Tynan said.

Alston said he "will be ready on day one and will push for swift action."

The grand jury had also recommended the removal of former member Rosalind Osgood, but she is now elected to the Florida Senate. The four can appeal their removal to the Senate. Murray and Levinson already decided not to seek reelection. Korn qualified in this week’s primary election for a November runoff — if elected, she would resume office. Good’s term was to expire in 2024.