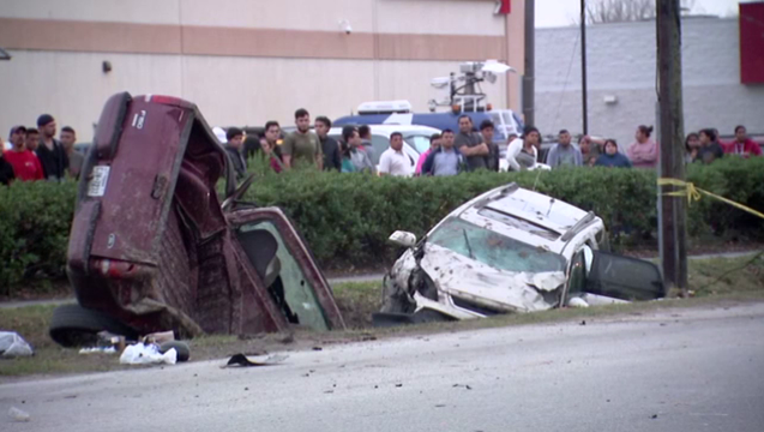 HOUSTON (FOX 26) - It's not a scene you soon forget, and witnesses say they've never seen anything like it.  Deputies now say a 14-year-old driver has been charged with murder after a deadly crash during a egging spree.

"It was a horrific hit. I tried to help as I could I waited for the ambulance and the cops to show up," said Steven Garza.

The crash happened around 2:30 p.m. near Aldine Mail Route and Aldine Westfield in north Harris County.

Three teens were being chased by another car after tossing eggs at it. They blasted through a red light and broadsided a maroon pickup truck. The impact spun around their SUV and tossed the mangled pickup truck like a toy. The driver, a woman in her 40s, died at the scene. Two of the teens went to the hospital.  A third tried to flee into a nearby store but got caught. The passengers were 15, the driver just 14.

"Inexcusable. They should never have been behind the wheel. They should not have been driving in that manner. This is just a tragic situation and somebody lost their life," said Sheriff Ed Gonzales.

Deputies say the driver that was chasing those boy is a Hispanic male in his late 20s with a tattoo on his left forearm and elbow. He was apparently waiving a semi automatic pistol. He's gone. He took off in his white 70s model Lincoln with a tan top and elbow rims leaving chaos and death behind him.

On Wednesday, investigators released the identification of the woman killed in the crash, 45-year-old Silvia Zavala. The 14-year-old driver has been charged with murder and booked in the county juvenile detention center. He sustained a broken ankle in the crash. Authorities say the driver of the vehicle chasing the teen has been identified.