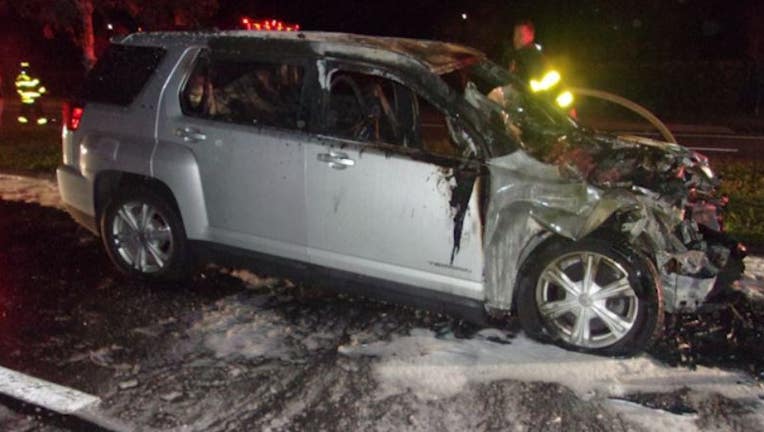 A 28-year-old man was arrested after deputies in Flagler County say he slammed into a city street sweeper in Palm Coast while under the influence.

Ari Waffle was charged with DUI and property damage following the incident that happened in the early morning hours of Halloween.

Derek Conklin said he was working the late shift -- sweeping an area of Old Kings Highway -- when the SUV slammed into him.

“I looked in my mirror and I saw a car coming at me and I looked up again and I realized he wasn’t going to stop next thing I know he hit me,” he said.

Conklin called 911 and worked with a passenger of the SUV to try to pull the driver to safety as deputies rushed to the scene.

“The steering wheel was pinning his legs down so I was having a hard time pulling them and then the officer just came and yanked him out,” he said.

Deputies said Waflle told them he was intoxicated.

“Where were you drinking at?,” the deputy asked. In bodycam released by FCSO, Waffle appears disoriented and unaware of what just happened.

MORE NEWS: Eta to regain tropical storm strength, edge of Florida is in its path

“Where’s the property damage,” he asks the deputy.

“It would be that nice city sweeper that you ran into the back of before your car burst into flames,” responded the deputy.

Conklin said seeing the damage to the SUV, he was amazed that the driver and two passengers walked away alive.

“I was shocked you know when I looked back at the car I couldn’t believe anybody was walking out of it much less all three of them,” he said.

As for himself, he’s sore but overall doing okay.