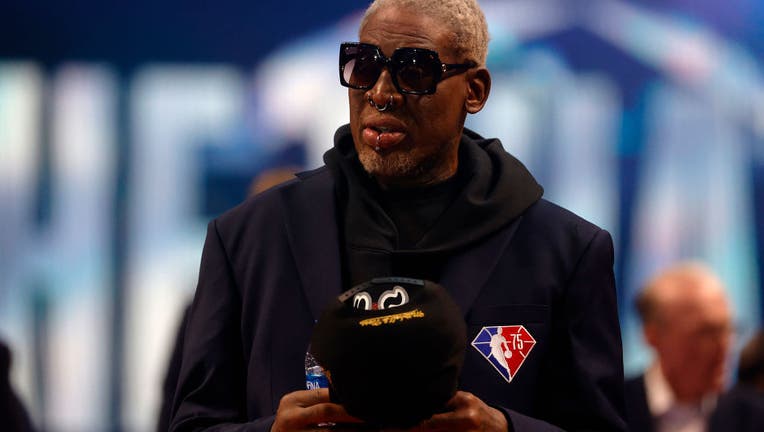 Dennis Rodman reacts after being introduced as part of the NBA 75th Anniversary Team during the 2022 NBA All-Star Game at Rocket Mortgage Fieldhouse on February 20, 2022 in Cleveland, Ohio. (Photo by Tim Nwachukwu/Getty Images)

NBA legend Dennis Rodman said Saturday he "got permission" to go to Russia to seek the release of WNBA star Brittney Griner, who was sentenced to nine years in prison on drug charges.

The Basketball Hall of Famer, who was at a sneaker convention in Washington over the weekend, told NBC News he was looking to head over to Moscow at some point this week.

"I got permission to go to Russia to help that girl. I'm trying to go this week," he told the outlet, adding he knew Russian President Vladimir Putin "too well."

The State Department has issued a travel advisory for Americans, warning them not to travel to Russia.

"Do not travel to Russia due to the unprovoked and unjustified invasion of Ukraine by Russian military forces, the potential for harassment against U.S. citizens by Russian government security officials, the singling out of U.S. citizens in Russia by Russian government security officials including for detention, the arbitrary enforcement of local law, limited flights into and out of Russia, the Embassy’s limited ability to assist U.S. citizens in Russia, COVID-19-related restrictions, and terrorism," the warning reads. "U.S. citizens residing or traveling in Russia should depart Russia immediately.  Exercise increased caution due to wrongful detentions."

State Department spokesman Ned Price said last week the agency still classified Griner as being "wrongfully detained." He was asked about Griner and the potential of a prisoner swap with Russia, which may involve Viktor Bout and another American held in Russia, Paul Whelan.

"No element of this trial changes our judgment that Brittney Griner is being wrongfully detained and should be released immediately," Price said. "That is why we've put forward a number of weeks ago what we consider to be a serious, substantial proposal and an effort to seek her release, to seek the release of Paul Whelan as well.

"We are in communication with the Russians on this matter, and we encourage them to pursue this constructively."

Griner’s lawyers in Russia appealed her conviction. She was arrested for bringing vape cartridges containing oils derived from cannabis through a Moscow airport in February. She was convicted and received her sentence on Aug. 4. 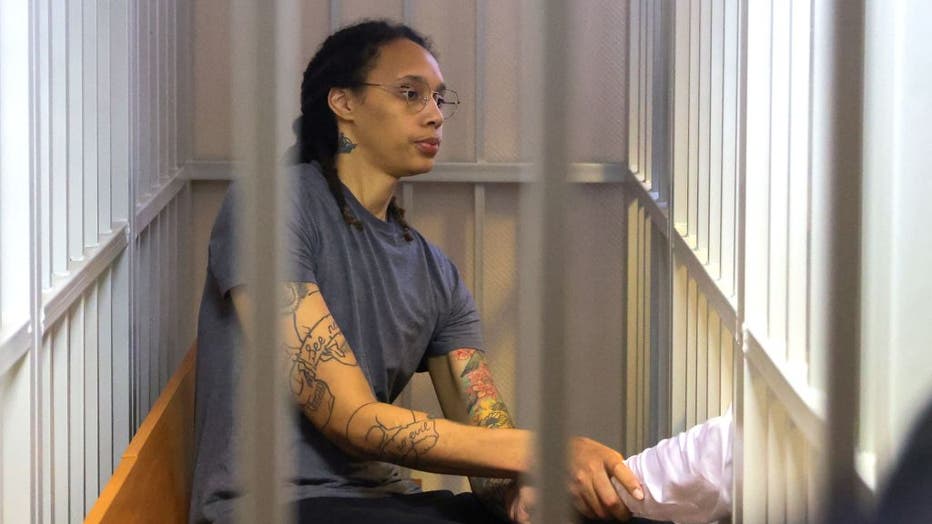 US Women's National Basketball Association (WNBA) basketball player Brittney Griner, who was detained at Moscow's Sheremetyevo airport and later charged with illegal possession of cannabis, sits inside a defendants' cage after the court's verdict dur

Rodman has a history of interacting with world leaders.

Rodman met with North Korean dictator Kim Jong Un in 2013 and was among the first Americans to meet him. The former Chicago Bulls star addressed a letter to Kim in January 2014 and about 10 months later captured American Kenneth Bae was released, according to TMZ Sports. Rodman had appeared in the country a few times since Bae’s release.

In 2014, Rodman described Putin as "cool" in an interview on FOX Business. He said he wasn’t talking about Putin’s politics. He said Putin shook his hand and left during his interaction with him in a trip to Russia.