In the footage, the vehicle can be seen conducting a ‘burn-out,’ creating excessive noise and blue smoke which obstructed the visibility of other motorists on the public roadway. (Credit: Queensland Police via Storyful)

In a press release, police described the incident as a "dangerous operation."

In the footage, the vehicle can be seen conducting a ‘burn-out,’ creating excessive noise and blue smoke which obstructed the visibility of other motorists on the public roadway.

There was a group of people gathered nearby taking photos and videos, officials noted.

Police are now appealing to anyone who has information in relation to who was driving the vehicle at the time, to come forward. 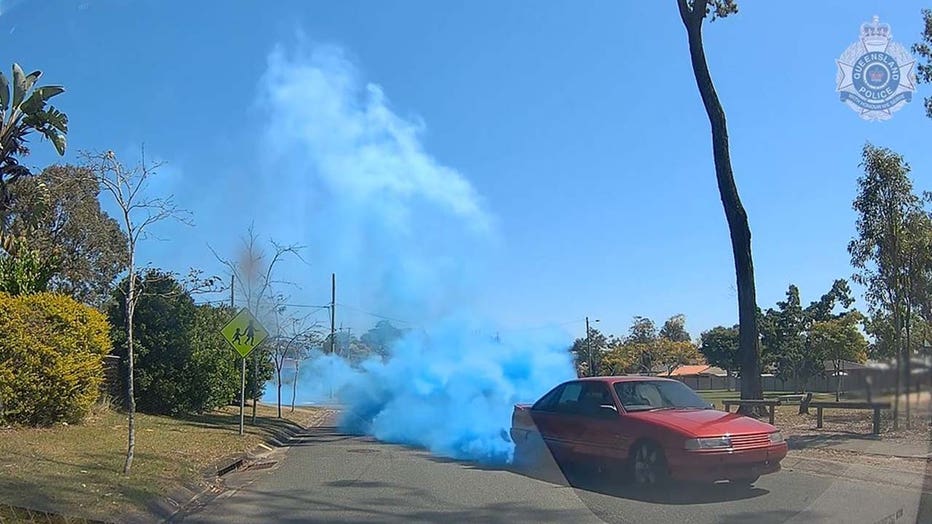 This isn’t the first gender reveal party that has caused issues and destruction.

In recent years, some gender reveal events — where devices eject confetti, balloons, or other colored objects to announce a soon-to-be-born child’s sex — have taken a dangerous turn.

RELATED: Man charged in connection with explosion at gender reveal party that rocked nearby towns

In May, a man was charged for an explosive gender reveal party that was heard by residents in New Hampshire and Massachusetts. Anthony Spinelli, of Kingston, was charged with disorderly conduct, police said.

And in February, a father-to-be was killed in an explosion in upstate New York when he was building a device used for a gender reveal party.

That same month, another man was killed in an explosion that occurred during a baby shower, according to Gaines Township authorities.

Last Sept., a couple’s plan to reveal their baby’s gender with blue or pink smoke sparked a wildfire that burned thousands of acres in Southern California.

And in 2019, a homemade explosive used to reveal a baby’s gender killed 56-year-old Pamela Kreimeyer in Knoxville, Iowa. The device was meant to spray powder but instead blew up like a pipe bomb.

Austin Williams and the Associated Press contributed to this story.