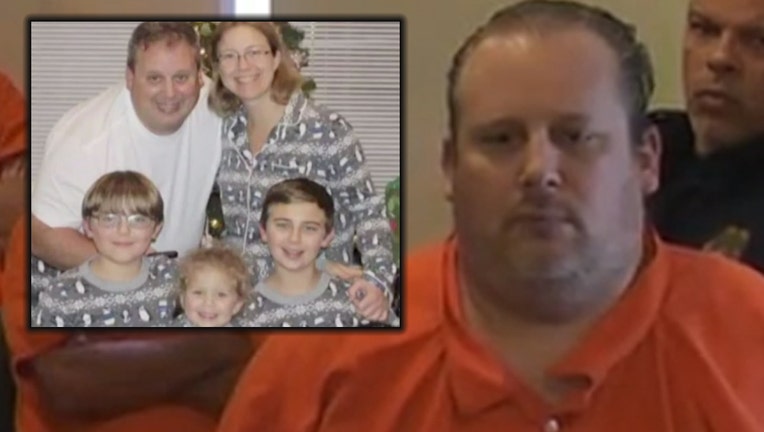 A Connecticut physical therapist charged with killing his wife and three children at their Florida home told his sister in a phone call from jail that he couldn’t have stopped his family from being slain — because he wasn’t around.

“I couldn’t stop this because I wasn’t there,” Anthony Todt told his sister Chrissy Caplet in recordings of one of two phone calls obtained by The Day of New London, Connecticut.

Authorities allege that Todt, who worked in Connecticut and spent weekends with his family in Florida, killed his wife and three children, as well as the family dog. The decomposing bodies were discovered Jan. 13, a Monday, in the family’s home in Celebration, a planned community near Walt Disney World and developed with a Utopia-like vision by the Walt Disney Co.

Todt, 45, claimed in a June 19 letter to his father obtained by the Orlando Sentinel that his wife, Megan, had drugged the children and then stabbed and suffocated them. Todt wrote that his wife then drank a bottle of Benadryl and stabbed herself in the abdomen.

Anthony Told, the Celebration man accused of killing his family, claims his wife was responsible for the deaths.

He made similar claims in the two phone calls to his sister in March and April, suggesting that Megan Todt had tried to kill the children before. “There were multiple attempts, just so you know, multiple attempts in the last ... over a time frame, there’s been attempts,” Todt said.

FBI agents found Todt inside the home in Celebration with the bodies of his family when they arrived to arrest him on a warrant stemming from a health care fraud investigation in Connecticut.

Investigators with the Osceola County Sheriff’s Office said Todt confessed at the time of his arrest to killing Megan, 42; their children, Alek, 13, Tyler, 11, and Zoe, 4; and the dog, Breezy.

Prosecutors are seeking the death penalty for a man indicted on four counts of first-degree murder in the slayings of his wife and three children at their Florida home near Walt Disney World. State Attorney Aramis Ayala announced during a news conference Tuesday that an Osceola County grand jury had formally charged Anthony Todt.

Prosecutors have said they intend to seek the death penalty for Todt, who has been indicted on four counts of first-degree murder. He has pleaded not guilty.

Defense attorneys have not spoken publicly about Todt’s claim that his wife was the real killer. An email seeking comment was sent to Orange-Osceola public defender Robert Wesley.