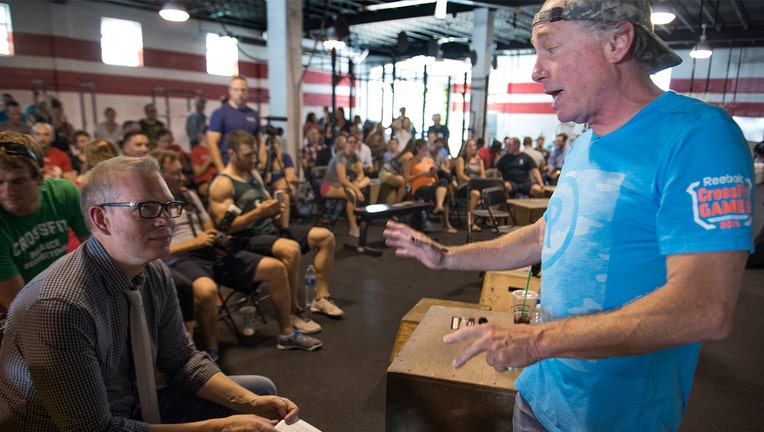 Crossfit Inc. founder and CEO Greg Glassman (R) talks to employees prior to a presentation at the Half street location in Washington, DC on July 31, 2015. CrossFit is waging a war against new DC rules to regulate personal trainers, saying D.C. is a p (Linda Davidson / The Washington Post via Getty Images)

The founder of CrossFit is retiring following racial comments he made about inequality protests in the wake of the death of George Floyd.

“I’m stepping down as CEO of CrossFit, Inc., and I have decided to retire," CrossFit founder and CEO Greg Glassman said in a statement. "On Saturday I created a rift in the CrossFit community and unintentionally hurt many of its members. Since I founded CrossFit 20 years ago, it has become the world’s largest network of gyms. All are aligned in offering an elegant solution to the vexing problem of chronic disease. Creating CrossFit and supporting its affiliates and legions of professional trainers has been a labor of love. Those who know me know that my sole issue is the chronic disease epidemic. I know that CrossFit is the solution to this epidemic and that CrossFit HQ and its staff serve as the stewards of CrossFit affiliates worldwide. I cannot let my behavior stand in the way of HQ’s or affiliates’ missions. They are too important to jeopardize.”

The company also released a public statement titled, "Why Didn't CrossFit Just Say Something?" In the mea culpa, the company said: “We disappointed you. It hurt you and us. We need to talk. The CrossFit community is in need of peace. This year has put unrelenting pressure on us all, exposed unaddressed flaws, and been near unbearable for many. Change is needed. We all need healing. Exhaustion and a long history of silent grievances have been laid bare on social media. We cannot change what has happened, but we ask for forgiveness while we thoroughly examine ourselves.”

BuzzFeed News reported Glassman told CrossFit owners on a private Zoom call this weekend: “We're not mourning for George Floyd — I don't think me or any of my staff are.”

“Can you tell me why I should mourn for him? Other than that it’s the white thing to do — other than that, give me another reason,” Glassman added.

Floyd, who was African American, died two weeks ago after a white Minneapolis police officer pressed a knee on his neck for several minutes. The incident was captured on video and has sparked worldwide protests.

On Saturday, the Institute of Health Metrics and Evaluation tweeted: “Racism is a Public Health Issue.”

In a Twitter response, hours after the Zoom call, Glassman said, “It’s Floyd-19,” a reference to COVID-19, the disease caused by coronavirus that has killed 400,000 people around the world this year.

Earlier this week, Glassman, through his company’s Twitter account, apologized for the weekend’s tweet, saying, “I, CrossFit HQ, and the CrossFit community will not stand for racism. I made a mistake by the words I chose yesterday. My heart is deeply saddened by the pain it has caused. It was a mistake, not racist but a mistake.”

Reebok, which had been negotiating a new contract with CrossFit, cut ties with the company after the Twitter controversy.