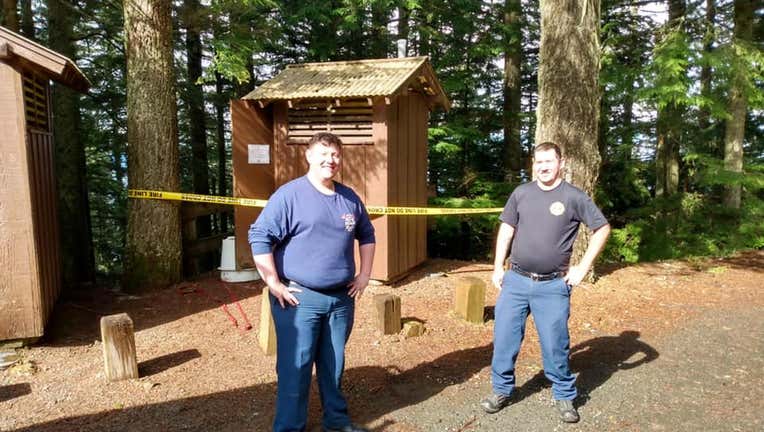 QUILCENE, Wash. - Two Jefferson County fire departments rescued a California woman who became stuck in a vault toilet at the top of Mount Walker on Tuesday after falling in the toilet to retrieve her phone.

Mount Walker is located in Quilcene, Washington and is part of the Olympic National Forest.

The woman told rescuers that she dropped her cell phone down into the vault toilet while she was using it. She tried to take the toilet apart to get it, but when that didn't work, she said she used her dog's leash to try and fish it out.

She then tried to use the leashes as a support to lower herself in, but they weren't strong enough, so she slid and fell into the vault head-first, according to the Brinnon Fire Department.

She spent around 20 minutes trying to get out before using her phone to call 911.

Brinnon Fire Department and Quilcene Fire Rescue responded to the north parking lot at Mount Walker to get the woman out. Crews made a makeshift "cribbing platform" that they lowered down for the woman to stand on.

They were able to pull the woman out to safety, and she told fire crews she was uninjured.

She was washed down and given a hazmat-type of suit to wear.

Rescue crews strongly recommended that she seek medical attention after being exposed to human waste, but the woman declined.

The Brinnon Fire Department said, "the patient was extremely fortunate not to be overcome by toxic gases or sustain injury."

The woman thanked the first responders and continued on her journey back to California.