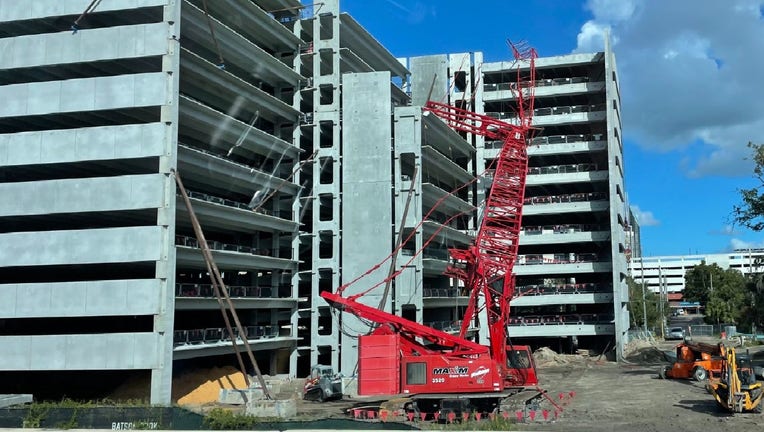 ORLANDO, Fla. - Three people were injured during a crane collapse in Orlando on Tuesday. The cause is still under investigation by the Occupational Safety and Health Administration (OSHA).

"That’s really amazing footage." Dashcam video shows the moment the crane collapsed.  The video was provided to FOX news from attorney Brett M. Bressler and was recorded as he was driving along Interstate 4.

As OSHA investigates, we asked James Headley of Crane Institute of America what could cause something like this.

"It looked like the boom collapsed down here first, but that’s pure speculation," he explained as he reviewed photographs and video. "It’s usually operator error – lack of inspection, improper installation.  [The] bad part is it could be a number of things."

Witness Reginald Edge, who was just a couple hundred feet from the site, saw it all in real-time.

"It just started breaking. The crane tipped over like it is right now and wires started flying, then other wires. It actually sounded like gunshots. all the wires were hitting stuff, like 'Pow! Pow! Pow!"

A FOX 35 News camera recorded video of a man on a stretcher being rushed to an ambulance.

"You could hear a bunch of dudes screaming for help," Edge said.

The contractor said the crane was erecting a column from a truck up to the top of the parking garage under construction when that crane collapsed.

With so many cranes around town, we asked Headley how safe it is for any of us walking around town.

According to the Center of Fatal Occupational Injuries, there are roughly 44 crane-related deaths every year in the U.S.

As for the crane, he said workers will be removing it piece by piece, with another crane.

"Cutting it apart with a torch and then they’ll bring it down."