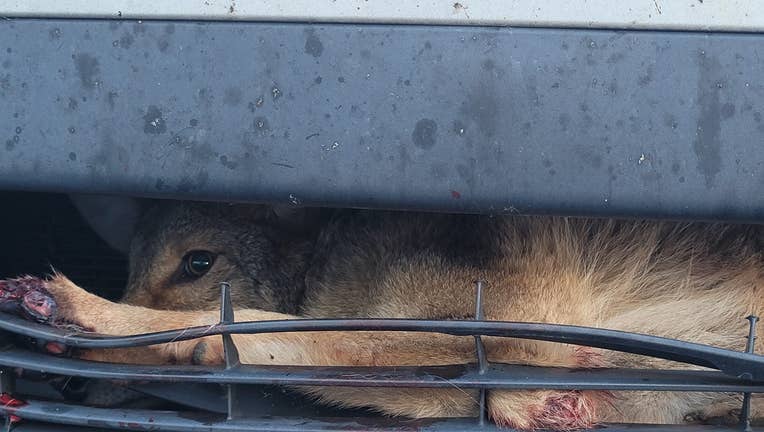 An adult coyote was rescued Thursday morning after spending the night in the grill of a car that it was hit by Wednesday night.

The person who hit the coyote with their car assumed the animal was dead, but after dropping the car off to a dealership Thursday morning, workers discovered the coyote was still alive and stuck inside the grill, according to the St. Francis Wildlife Association.

A rescuer with St. Francis Wildlife was sent to the Peter Boulware Toyota in Tallahassee where employees were able to remove the front of the car for easier access. The rescuer scooped the coyote up and placed her into a crate.

The coyote was taken to Allied Veterinary Hospital for stabilization, medication, and X-rays. She suffered a clean fracture to the coyote’s front right radius and ulna. She was then scheduled for emergency repair surgery Friday morning.

The wildlife association urges drivers to always check their cars after striking a wild animal when it is safe to do so.

In a Facebook post, the St. Francis Wildlife Association said "We understand it can be terrifying and traumatic to check on an animal after it is struck—but please call our rescue team right away so we can meet you at the scene to do an assessment. We are happy to check for you, and we are available 24/7 to assist!"