President Joe Biden on May 26 ordered U.S. intelligence officials to redouble their efforts to investigate the origins of COVID-19, including any possibility that the virus may have emerged from a Chinese laboratory.

WASHINGTON - U.S. officials said an unclassified version of a review on the origins of COVID-19 sought by President Joe Biden is expected to be released for the public within "several days," as the experts on the World Health Organization’s team dispatched to China said their search has stalled.

In late May, Biden ordered a 90-day review by intelligence agencies of theories about the origins of the coronavirus, including whether the virus could have leaked from a lab in the Chinese city of Wuhan where it was first detected in late 2019. The other likely scenario identified was an animal-to-human transmission.

White House Press Secretary Jen Psaki said Monday that an unclassified version of the report was expected to be released within "several days."

Biden was briefed Tuesday on the classified report, according to the Washington Post. The outlet reported that the review proved inconclusive about the virus's origin, citing two U.S. officials speaking on the condition of anonymity.

The completion of the review comes as the U.S., China and the World Health Organization remain entangled in a feud that centers on whether the virus that causes COVID-19 could have leaked from the Wuhan Institute of Virology.

On Wednesday, the international scientists sent to China by the WHO said the search of the origin has stalled and warned that the window of opportunity for solving the mystery is "closing fast."

In a commentary published in the journal Nature, the WHO-recruited experts said the investigation is at "a critical juncture" requiring urgent collaboration but has instead come to a standstill. They noted among other things that Chinese officials are still reluctant to share some raw data, citing concerns over patient confidentiality.

Earlier this year, a joint WHO-China report had concluded the virus probably jumped to humans from animals, and they described the possibility of a laboratory leak as "extremely unlikely."

But the WHO experts said this week that their report was intended only as a first step and added, "The window of opportunity for conducting this crucial inquiry is closing fast: any delay will render some of the studies biologically impossible."

For example, they said, "Antibodies wane, so collecting further samples and testing people who might have been exposed before December 2019 will yield diminishing returns." 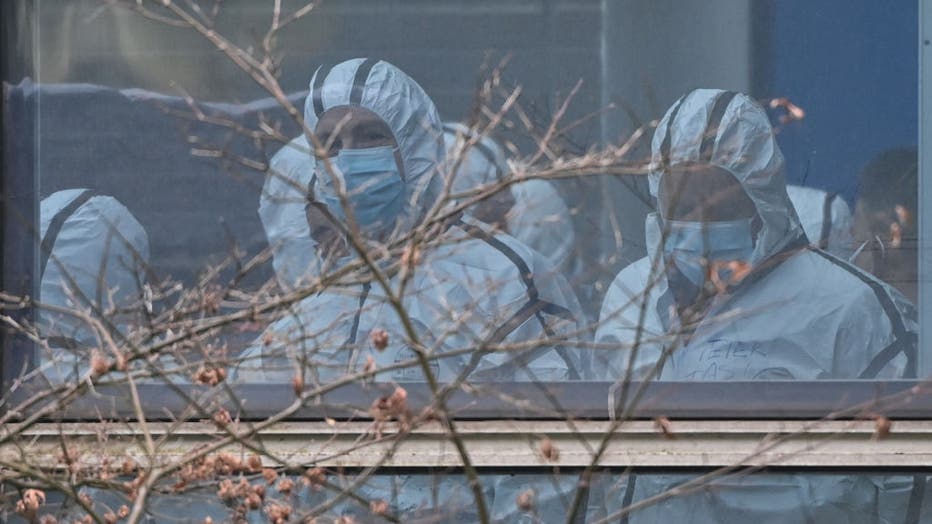 Members of the World Health Organization (WHO) team investigating the origins of the novel coronavirus are seen during a visit to the Hubei Center for animal disease control and prevention in Wuhan, China, on Feb. 2, 2021. (Photo by HECTOR RETAMAL/AF

Meanwhile, China went on the offensive ahead of the U.S. intelligence report’s release and said officials should "concentrate on other possible avenues that may help trace the origin" of COVID-19 and suggested studies should be pursued in other countries.

Fu Cong, a director-general in China’s Foreign Ministry, agreed it was a "pity" the search for COVID-19’s origins had stalled but said it wasn’t China’s fault. "China has always supported and will continue to participate in the science-based origin tracing efforts," he said.

He accused the U.S. of "hyping the lab leak theory" and trying to shift the blame onto China, and implied the coronavirus might be linked to high-level American research labs, suggesting the United States invite WHO to investigate some of its installations.

The White House has criticized China for a lack of transparency, saying in a May 26 statement that the inability to get inspectors on the ground in the early months of the initial outbreak "will always hamper any investigation into the origin of COVID-19."

The Associated Press previously reported on China’s interference in the WHO’s probes of the virus and its fanning of conspiracy theories online. China has also forced journalists to leave the country in recent years and silenced or jailed whistleblowers from Wuhan and elsewhere.

The COVID-19 pandemic death toll stands as more than 4.4 million people worldwide as a more contagious variant of the virus continues to circulate — largely among unvaccinated populations. Public health officials say insight into the origins of the virus could help governments prevent and contain future outbreaks.

Many scientists, including Dr. Anthony Fauci, say they still believe the virus most likely occurred in nature and jumped from animals to humans. The most compelling argument for investigating the possibility of a lab leak is not any new hard evidence — but rather the fact that another pathway for virus spread has not been 100% confirmed.

"The great probability is still that this virus came from a wildlife reservoir," said Arinjay Banerjee, a virologist at the Vaccine and Infectious Disease Organization in Saskatchewan, Canada.

He pointed to the fact that spillover events – when viruses jump from animals to humans – are common in nature, and that scientists already know of two similar beta coronaviruses that evolved in bats and caused epidemics when humans were infected, SARS1 and MERS. However, the case is not completely closed.

"There are probabilities, and there are possibilities," said Banerjee. "Because nobody has identified a virus that’s 100% identical to SARS-CoV-2 in any animal, there is still room for researchers to ask about other possibilities."

But confirming the origin of a virus with 100% certainty is often not fast, easy, or always even possible. Scientists never confirmed the origin of smallpox before the disease was eradicated through a global vaccination program.

Experts have cautioned that it’s unlikely that a 90-day review will yield definitive new answers.

"We rarely get a ‘smoking gun,’" said Stephen Morse, a disease researcher at Columbia University. "Even under the best of circumstances we rarely get certainty, just degrees of likelihood."