President Biden said Thursday the Colonial Pipeline will be back up and running in full by the weekend.

Colonial Pipeline said Thursday is has resumed full operations along its pipeline system on the East Coast, but said it will take "several days" before supply chains return to normal following a near-weeklong shutdown due to a cyberattack.

"We can now report that we have restarted our entire pipeline system and that product delivery has commenced to all markets we serve," the company said in a statement Thursday afternoon. "Following this restart, it will take several days for the product delivery supply chain to return to normal. Some markets served by Colonial Pipeline may experience, or continue to experience, intermittent service interruptions during this start-up period."

The company added that it will move "as much gasoline, diesel, and jet fuel as is safely possible and will continue to do so until markets return to normal."

Colonial Pipeline, which delivers about 45% of the East Coast’s gas, shutdown after the company suffered a ransomware attack on Friday, leading to distribution issues and panic-buying among drivers. Many gas pumps remained shrouded by plastic bags on Thursday at thousands of gas stations across the southeastern U.S.

Earlier Thursday, President Joe Biden sought to calm panic at the pump and stressed that a full return to normal operations would "take some time." He said he expects "region-by-region return to normalcy will start this weekend."

"This is not like flicking on a light switch," Biden warned. He told fuel providers not to price gouge and "take advantage of consumers," while urging Americans not to get more gas than needed over the next few days.

"As I said, we expect the situation to begin to improve by the weekend and into early next week, and gasoline supply is getting back online, and panic buying will only slow the process," he noted. 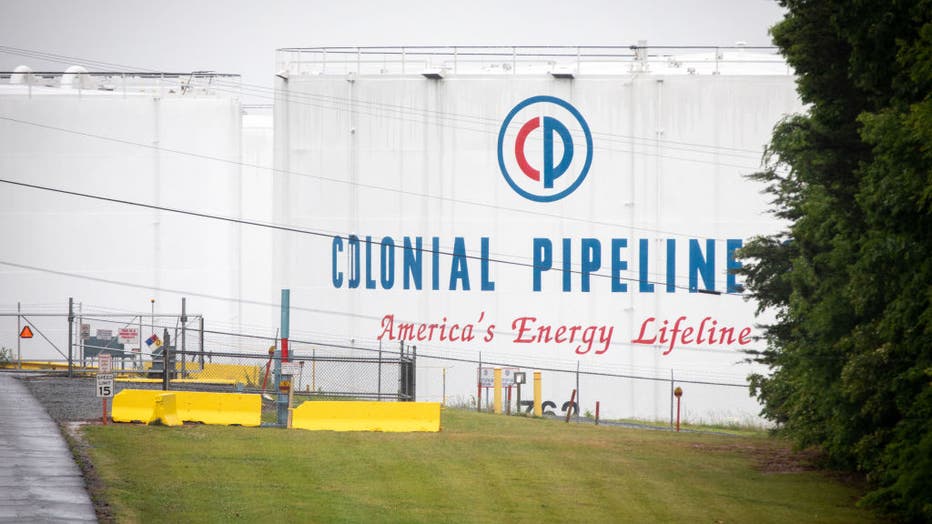 A Colonial Pipeline storage site in Charlotte, North Carolina on May 12, 2021.(Photo by LOGAN CYRUS/AFP via Getty Images)

The ransomware attack Friday caused a supply crunch and spiking prices as many rushed to the pump. Experts have said it also exposed the nation's vulnerability to such cybersecurity attacks.

Biden said the pipeline attack serves as "an urgent reminder of why we need to harden our infrastructure and make it more resilient against all threats, natural and man-made," noting his proposed $2.3 trillion infrastructure package.

The FBI named DarkSide as the criminal syndicate whose ransomware was used. The group's members are Russian speakers, and the syndicate’s malware is coded not to attack networks using Russian-language keyboards. Russia, however, has denied any involvement.

Ransomware scrambles data that can only be decoded with a software key after the victim pays off the criminal perpetrators. Hospitals, schools, police departments and state and local governments are regularly hit.

The president said U.S. officials do not believe the Russian government was involved in the cyberattack, but confirmed that the attackers are based in Russia.

"We have been in direct communication with Moscow about the imperative for responsible countries to take decisive action against these ransomware networks," Biden said while speaking from the Roosevelt Room.

Such attacks are difficult to stop in part because they’re usually launched by criminal syndicates that enjoy safe harbor abroad, mostly in former Soviet states. An epidemic of ransomware attacks has gotten so bad that Biden administration officials recently deemed them a national security threat.

What happened in the Colonial Pipeline ransomware attack

Colonial Pipeline, the operator of a major pipeline system that transports fuel across the East Coast, was victimized by a ransomware attack and halted all pipeline operations to deal with the threat.

The Colonial Pipeline plays a key role in transporting gasoline, jet fuel, diesel and other petroleum products. Nearly 70% of North Carolina's gas stations on Thursday were still without fuel amid panic-buying, as were about half the stations in South Carolina and Georgia, GasBuddy.com reported.

Drivers on the East Coast were also having trouble, with more than half the stations tapped out in Virginia. Washington, D.C., was among the hardest-hit places Thursday, with 73% of stations out, the site's tracking service showed.

"I can’t get paid until my customers get their products," said Mary Goldburg of Norfolk, Virginia, whose job includes delivering T-shirts for events and other promotional products.

But gas was flowing again Thursday across most of the Deep South, and other parts that were offline in the Mid-Atlantic region were expected to become operational soon, the company said.

"We are not out of the woods yet, but the trees are thinning out," Richard Joswick, global head of oil analytics at S&P Global Platts, told the Associated Press. He estimated that full recovery for the East Coast and Gulf Coast will take a couple of weeks at least due to lags and limits for all shipping options.

To help address the gas situation, the Department of Homeland Security issued a temporary waiver of a federal law overseeing maritime commerce to an individual company, not identified by the department, to allow the transport of additional gas and jet fuel between Gulf Coast and East Coast ports.

The Transportation Department was surveying how many vessels could carry fossil fuels to the Gulf of Mexico and Eastern Seaboard to provide gasoline. Waivers were issued to expand the hours that fuel can be transported by roadways. The Environmental Protection Agency issued waivers on gas blends and other regulations to ease any supply challenges.

At the state level, the governors of Florida, Virginia and North Carolina each declared a state of emergency this week to help ensure a sufficient supply of fuel. Other governors urged people not to hoard supplies.

"Now that Colonial has restarted pipeline operations, we will see a gradually increasing return to normal conditions that will take several days," North Carolina Gov. Roy Cooper said in a statement Thursday. "There is available fuel supply in and around our state, and it will take time for tankers to move that supply to the stations that are experiencing shortages."

Long lines were seen at a gas station in Monroeville, Alabama on May 10, amid fears of shortages due to the shutdown of the Colonial Gas Pipeline following a cyber attack. (Credit:Credit: Heather Walker Spears via Storyful)

Mary Goldburg, 60, of Norfolk, Virginia, said she needs her car for work but also to see her grandchildren — whom she barely got to see last year. Her job includes delivering T-shirts for events and other promotional products.

"I can’t get paid until my customers get their products," Goldburg said at a 7-Eleven.

Two people were charged with assault after spitting in each other's faces over spots in a line at a Marathon station in Knightdale, outside Raleigh, on Tuesday afternoon, authorities said.

In Walton County, Georgia, paramedic Jeff Lisle had just under a quarter-tank of gas in his Jeep and found a small amount in the cans he uses for his lawnmower in case he needed the extra boost to get to work.

As for the ambulances he works in, "we have to buy fuel at gas stations like everybody else does," he said. Whenever possible, the ambulances have been stopping to refuel when they’re lucky enough to drive past a station with gas.

The shutdown even affected hikers long the Appalachian Trail, which stretches from Georgia to Maine. They depend on cars and vans to access the trail and get supplies.

"Everybody’s out here buying from the same gas pumps, so the lines are long, some are out -- you’ve really got to look for it," said Ron Brown, who operates Ron’s Appalachian Trail Shuttles, which takes hikers from Atlanta’s airport into the north Georgia mountains.

American Airlines rerouted two long-haul flights from Charlotte, North Carolina, because of possible jet fuel shortages. Passengers flying to Honolulu will have to change planes in Dallas, and those heading to London will stop in Boston to refuel.

Southwest and United flights carried extra fuel on flights to Nashville, Tennessee, Baltimore and some other airports in case jet fuel was unavailable at those airports. Normally airlines load only enough fuel for a single flight, because topping off adds to the plane’s weight and hurts mileage. Most planes can carry enough fuel for a round trip, but the extra fuel burn costs money.