Four people were killed and four others were wounded Tuesday morning in a mass shooting in the Englewood neighborhood on the South Side.

CHICAGO - Four people were killed and four others were wounded Tuesday morning in a mass shooting in the Englewood neighborhood on the South Side.

The shooting happened in the early morning hours after an argument inside a residence in the 6200 block of South Morgan Street, police said.

Four people were pronounced dead at the scene, police said. Chicago Police Supt. David Brown said three of the deceased were women and one was a man.

Ald. Lopez on Englewood mass shooting: 'We are a city on the edge'

Ald. Raymond Lopez (15th) talks about this morning's mass shooting in Englewood and the recent rash of violence across the city.

Four others were taken to local hospitals:

One by one, the family of Denice Mathis walked up to the police tape on the block in Englewood and reached out to each other. Some sobbed, others cursed.

Down the street, inside a two-story house with a gray stone front, lay Mathis and the bodies of two women and a man killed in the shooting that seriously wounded four other people.

Mathis, in her early 30s, was a mother of four boys and a girl, and had just taken her children to Six Flags over the weekend.

Another one of those killed was Shermetria Williams, 19 and the mother of a 2-year-old daughter. She was set to graduate from Country Club Hills Trade & Tech Center on Tuesday.

A third woman who died in the attack, Ratanya Rogers, lived in the home and was the mother of a 2-year-old girl who was there when the shots were fired, relatives said. She was not hit.

The fourth fatality was Blake Lee, who also lived in the home and did odds jobs in the neighborhood, relatives said. He had recently lost his mother and grandmother. 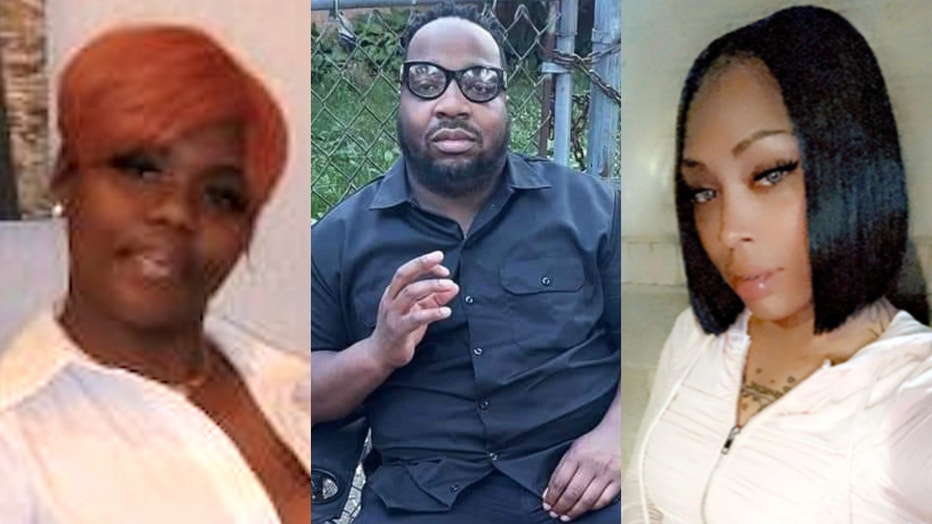 The attack is the third mass shooting in Chicago in little over a week and came at the end of a burst of violence that saw more than 25 people shot across the city in 10 hours.

The attack prompted Mayor Lori Lightfoot to say Chicago has joined a "club of cities to which no one wants to belong: Cities with mass shootings."

As she repeatedly has done, she decried lack of federal action aimed at "eliminating opportunity for criminals, for children, to get access to illegal guns so that petty disputes turn into mass shooting events, as we’ve seen over and over and over again."

Chicago police released few details of how the eight people were shot, but said it occurred when an argument broke out inside the home.

Four of the victims were pronounced dead at the scene shortly before 6 a.m., and four others were taken to hospitals, at least two of them in critical condition.

The 2-year-old girl found in the home was taken to Comer Children’s Hospital for observation.

A witness told police there were two volleys of gunshots inside the home, hours apart.

The first was around 2 a.m., when the ShotSpotter system alerted police to gunfire near the Morgan address, according to Police Superintendent David Brown. He did not say if police responded to the alert. 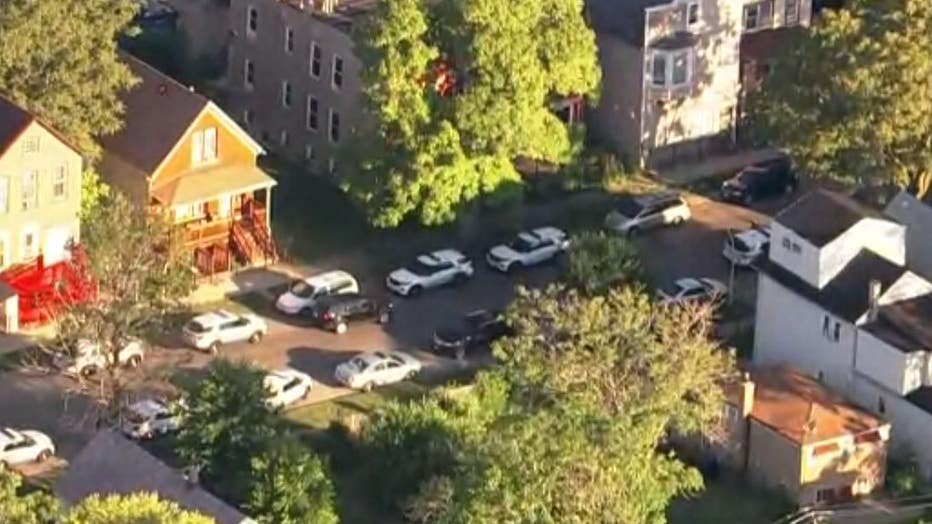 The witness heard shots again around 5 a.m., around the time officers arrived to find the victims. Police recovered shell casings inside the house and a large capacity "drum magazine."

There was no sign of forced entry, Brown said. At least one of the victims lived at the address, a barber who cut hair out of the house.

Brown did not elaborate on the relationships of the victims and the shooter, or what the argument was about.

Brown said the victims taken to hospitals had not yet been interviewed by detectives, and the investigation still was "very preliminary."

"All we know about this residence is there’s been several calls there for disturbances," Brown told reporters. "Overall, the block where this residence is located is fairly quiet, not much activity going on that requires a police response."

As officers worked the scene into the late morning, a crowd of distraught relatives and neighbors gathered along the police tape blocking off Morgan Street.

Mathis’ family said she was a devoted mother. "She was a good person — a free-spirited person," said a cousin, Vickie Smith. "She loved her family."

Mathis lived on the South Side, but the family didn’t know what brought her to the gathering on South Morgan.

A man who said he was Mathis’ brother said his sister had been to the house many times before. "She was a good girl — none of these knuckleheads," the brother said.

Demetrius Williams said he was at home in Maywood, putting on a shirt and tie for his daughter’s graduation, when he heard she had been killed.

"This is unbelievable — a massacre," said Williams, struggling to compose his thoughts as officers took down the crime tape around the Englewood house. "Why? Why did this have to happen?"

Williams still held the ticket for his daughter’s graduation. Back home were red roses and balloons that said "Congratulations."

"All she wanted to do was take care of her daughter and be successful in life," the father said. "She meant the world to me. That was my baby girl."

Also standing and waiting for answers outside the police tape was Raheem Hall, who grew up in Englewood and always had words of caution for his nephew Blake Lee.

"I told him just to be careful out here. Stay away from the wrong crowd," Hall said.

Blake lived in the house where the attack occurred. "He was a good guy," said Hall, who now lives in Indiana. "He did no harm to no one. He was just trying to live his life as an ordinary guy."

Similar scenes played out through the day at the hospitals where the wounded were taken.

A group of about 10 people waited outside the University of Chicago Hospital, where a woman in her mid-20s was taken after being shot on Morgan.

After he walked away, several women began to weep. One woman dropped to the ground and buried her face in her hands.

One person wrapped her arms around another and rubbed their back to comfort them as they stood against a chain-linked fence and faced the emergency room entrance.

"She got shot in the head," another person sobbed on the phone as they walked away.

Outside Christ Medical Center in Oak Lawn, relatives said the man who lived in the home, James Tolbert, was "alert and coherent."

Tolbert operated a barbershop from his home after COVID-19 restrictions closed down the shop where he worked. The 2-year-old girl taken to Comer’s for observation is his daughter, according to Tolbert’s sister, Michelle Tolbert.

Waiting outside the emergency room entrance, Michelle Tolbert said she learned her brother had been shot from a Facebook post and feared the worst.

"There were a lot of people putting up ‘RIP’ posts, so I was worried," she said.

Hospital staff would not let her up to her brother’s room, but said Tolbert no longer was in critical condition. "They told me he’s awake, he’s responsive."

Michelle Tolbert said her brother had a jovial "barbershop" personality and had studied to be an EMT before going to barber college.

"He’s a good person," she said. "He definitely didn’t deserve this."

The attack is the third mass shooting in Chicago in little over a week, and came just hours after gunfire erupted at a party in the Back of the Yards neighborhood on the South Side, killing a man and wounding two women.

"We've got to redouble our efforts to call upon the federal government to help us stop the flow of illegal guns into our city," said Lightfoot.

Mayor Lightfoot was one of 27 mayors that sent a letter to President Joe Biden on Tuesday calling on him to prioritize action on gun violence prevention.

"More rigorous oversight of these federally licensed gun dealers is absolutely essential," said Lightfoot during a virtual press conference with The United States Conference of Mayors.

During the conference, one speaker noted that on Friday night alone, there were four mass shootings over a period of six hours: in Austin, Savannah, Cleveland and Chicago.

"To slow and stop the rise of gun violence, we must address the systemic inequities that are at the root cause of it," said Lightfoot.

Early Saturday, a woman was killed and nine others were wounded near 75th Street and South Prairie Avenue. Kimfier Miles, 29, a mother of three, was out with a group of girlfriends when two men opened fire about 2 a.m. Saturday.

The weekend before, six men and two women were wounded when someone in a silver car opened fire in a shooting in the 8900 block of South Cottage Grove Avenue in the Burnside neighborhood.

Lightfoot blamed the violence on the lack of national laws that would curb the flow of illegal guns.

"When gun [laws] are so porous that they can come across our borders with such ease, as we see every single day in Chicago, we know that we have to have a multi-jurisdictional, national solution to this horrible plague of gun violence," she said. "And that starts with eliminating opportunity for criminals, for children to get access to illegal guns so that petty disputes turn into mass shooting events, as we’ve seen over and over and over again—not just this year, but every year."

Lightfoot bristled when asked how the steady stream of mass shootings might impact her efforts to reopen the city and encourage Chicagoans to come downtown to dine and shop and patronize the stores and restaurants in their own neighborhoods.

She noted that the Englewood shooting happened "inside a single residence" — not out on the street or in a large outdoor gathering.

"The reality is, our city is safe," the mayor said. "And I stand by that. We have done yeoman’s work over the course of a very difficult year where every major city—New York, Los Angeles, San Francisco, Washington D.C., Atlanta and on and on the list goes—has seen similar surge in violence."

Asked whether she believes Cook County State’s Attorney Kim Foxx is doing a good job prosecuting gun offenders, Lightfoot pointed to what one of the state’s attorney’s top aides said about the Chicago Police Department during a recent webinar for reporters.

"The conclusion of her policy person was that the Chicago Police Department is arresting the wrong people who possess guns. I fundamentally disagree with that," she said. "We are a city that’s awash in illegal guns. Those illegal guns cause deep pain and injury and death."

The Sun-Times Media Wire contributed to this report.