Unlike the geographic poles, the planet’s magnetic poles are in constant motion. But scientists say the north magnetic pole is moving at unprecedented speeds.

ASHVILLE, N.C. - You may want to check your compass.

Experts say the planet’s magnetic field is created by its moving, molten iron core. Unlike the geographic poles, its magnetic poles wander independently of each other and are in constant motion.

Since its discovery in 1831, the magnetic north pole has moved about 1,400 miles toward Siberia. Overall, the movement has been “generally quite slow,” and scientists have been able to keep track of its position fairly easily, according to the U.S. National Oceanic and Atmospheric Administration.

NOAA’s National Centers for Environmental Information and the British Geological Survey jointly update the location of the magnetic north pole every five years in December, but the pole’s faster movement led to scientists to update the World Magnetic Model a year early.

This month, the World Magnetic Model 2020 was officially released and offers a glimpse of where the magnetic poles are headed for the next five years. The 2020 model forecasts that the northern magnetic pole will continue drifting toward Russia, although at a slowly decreasing speed. 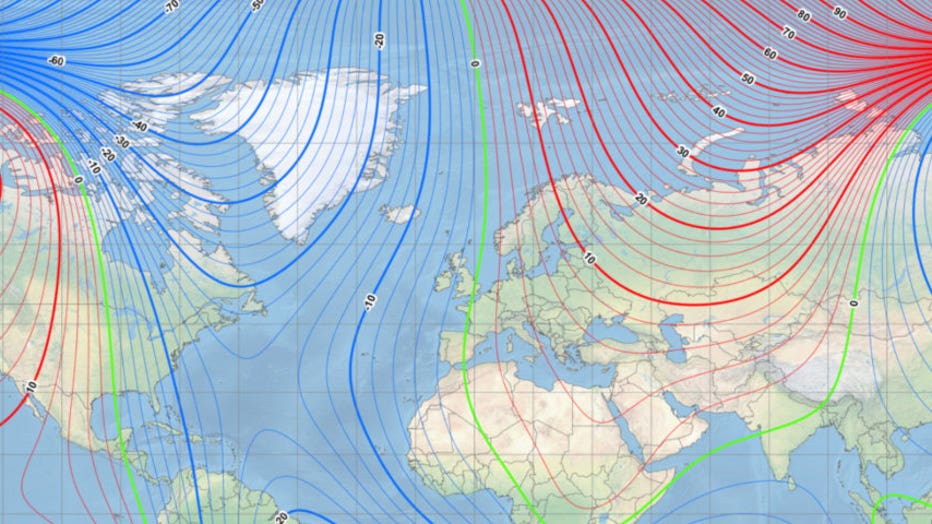 The World Magnetic Model 2020 was officially released this month and offers a glimpse of where the magnetic poles are headed for the next five years. (Photo credit: Courtesy of NOAA NCEI)

The constant shift is a problem for compasses in smartphones and some consumer electronics.

The military depends on where the magnetic north is for navigation and parachute drops, while NASA, the Federal Aviation Administration and U.S. Forest Service also use it. Airport runway names are based on their direction toward magnetic north and their names change when the poles moved.

“The movement since the 1990s is much faster than at any time for at least four centuries,” geomagnetic specialist Ciaran Beggan from the British Geological Survey (BGS) told RT. “We really don’t know much about the changes in the core that’s driving it.”

In general, Earth's magnetic field is getting weaker, leading scientists to say that it will eventually flip, where north and south pole changes polarity, like a bar magnet flipping over. It has happened numerous times in Earth's past, but not in the last 780,000 years.

When it reverses, it won't be like a coin flip, but will take 1,000 or more years, experts said.