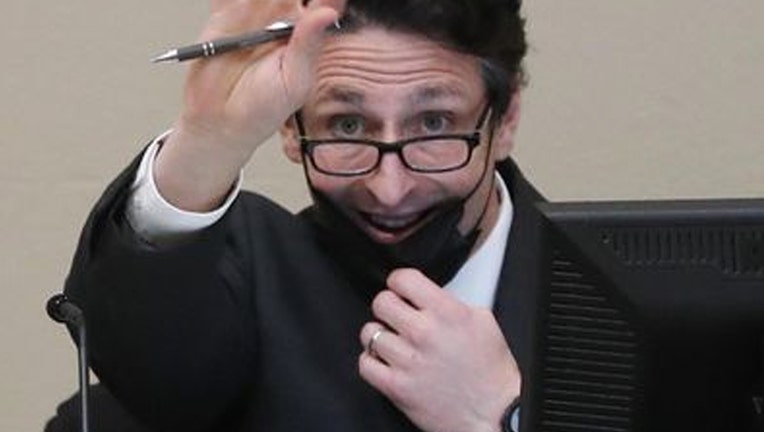 Casselberry commissioner Mark Busch waves during a meeting at Casselberry City Hall on Monday, January 25, 2021. Commissioner Busch is catching heat after being seen on video at a local Trump rally a day before last week’s riot at the U.S. Capitol th

CASSELBERRY, Fla. - A Florida city commissioner will remain in office but has agreed to step down from two boards after telling a local Trump rally before the attack on the U.S. Capitol that Vice President Mike Pence "better do the right thing" or he’ll face pitchforks and torches for failing to overturn the presidential election.

Casselberry Commissioner Mark Busch, who also serves as vice mayor, refused to quit despite a petition drive that drew more than 1,600 signatures seeking his resignation. The effort to oust him came to a head Monday during a commission meeting where more than a dozen citizens spoke. Some demanded that Busch resign while others spoke out in support, the Orlando Sentinel reported.

"I clumsily walked into this situation," said Busch, who had briefly apologized for his comments at an earlier meeting on Jan. 11 where a smaller group of citizens called for him to resign. He also said he would "continue to fight for freedom of speech," the newspaper reported.

Busch insisted he took part in the Jan. 5 rally as a private citizen even though a video posted on the social media website Rumbler showed him being introduced as a Casselberry commissioner while carrying a yellow "Don’t Tread on Me" flag, the Sentinel reported.

Resident Emily Orey called Busch’s "dangerous actions and words" at that rally "an embarrassment to the city" because he was elected to represent all residents.

The commission struggled with whether they could even reprimand Busch, the Sentinel reported.

Commissioner Andrew Meadows pointed to a "Code of Boardmanship" resolution that Casselberry adopted in 2007 that says commissioners "will refrain from any individual action that could compromise the integrity of the city."

But he stopped short of calling for a reprimand, or of hiring an independent attorney to investigate. The mayor agreed.

"Did it put the city in the best light? Probably not," the mayor said. "But he’s already been publicly flogged. ... He pretty much put it on himself."

Resident Jason Quinn said it would set a dangerous precedent for the board to condemn an elected official for what they say.

The video shows Busch urging the vice president not to certify the Electoral College votes the next day.

LIST: These are the Publix stores offering the COVID-19 vaccine

"He’s going to have one to two million people sitting outside the Capitol," Busch said. "He better do the right thing … And these people, they’re foaming at the mouth mad right now. They got the pitch forks. And they got the torches. And if they don’t do what should be doing, watch out. All bets are off. … I think at this point, we just don’t care anymore."

The next day, a large mob stormed the U.S. Capitol in an attempt to disrupt the confirmation of the Electoral College count and overturn Joe Biden’s presidential win in last November’s election. Five people died in the attack.

Busch said after Monday’s meeting that he’s glad residents from both sides spoke out.

"It’s a win for freedom of speech," Busch said. "You could say that in the city of Casselberry, we work these things out."