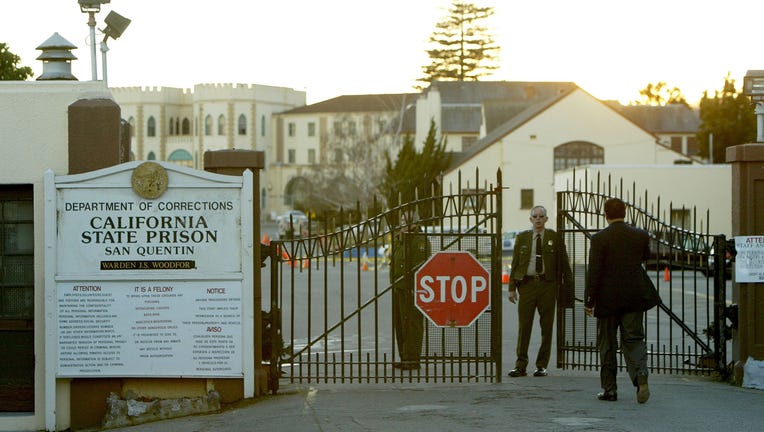 SAN QUENTIN, CA - FEBRUARY 9: Reverend Jesse Jackson (R) walks towards the California State Prison at San Quentin for a meeting with convicted killer Kevin cooper February 9, 2004 in San Quentin, California. A decision by an 11-judge panel of the 9th

SAN QUENTIN, Calif. - The California Attorney General's Office is fighting back about the proposed release of hundreds of people incarcerated in San Quentin as a result of a court decision that found their custody in aging buildings and cramped quarters during coronavirus constituted "deliberate indifference."

In a brief filed Monday in Marin County Superior Court, Xavier Becerra and his colleagues argued to Superior Court Judge Geoffrey Howard that their client -- the California prison system -- is against letting 311 people leave San Quentin during the pandemic because, as they see it, there are several other alternatives. A court hearing on the matter is scheduled for Nov. 30.

The AG's Office argued that roughly 1,000 people inside San Quentin could easily be transferred to any one of the other 29 male prison facilities in the state, which would mean 36 inmate transfers per prison. And if some of the facilities are overcrowded, Becerra argued, there are at least 10 that are not, which would mean sending about 100 inmates to those prisons. And despite allegations otherwise, his office argued, San Quentin is "well able to maintain the safety and security of its prisoners."

Becerra's office was responding to the First Court of Appeals ruling, which ruled in October that the California Department of Corrections and Rehabilitation must reduce its population by half at San Quentin, where 28 people have died of coronavirus, by half, either by transferring inmates or releasing them. That's a total of about 1,775 prisoners.

The inmates, for the most part, do not want to transfer. In court filings, they cited several reasons: A botched transfer from a prison in Chino to San Quentin is what caused the deadly coronavirus outbreak in the first place; moving from San Quentin would take them away from educational programming and their families and moving to other overcrowded prisons doesn't seem to be the answer.

Instead, a team of lawyers from public defender's offices around the Bay Area wants to prioritize the needs of those older than 60, those who have served 25 years of their sentences, those who are eligible for parole and those who are at high medical risk -- and let them out early as part of a large habeas corpus release.

But the Attorney General's Office said that argument isn't valid.

"Such refusals, however, do not entitle prisoners to an individual remedies determination," Becerra's team wrote. "Much less release from prison."

Plus, Becerra's team argued, the release of the 300 prisoners isn't even necessary. That's because they pointed out, the entire prison system will be thinned out anyway. In January, anyone older than 50 or served 20 years will be eligible for parole, they said.

And finally, Becerra and his attorneys argued, the incarcerated population can't have it both ways.

"Either San Quentin is so unsafe that their life depends on their removal from there," Becerra's team wrote. "Or it is only unsafe if they are going to be transferred."