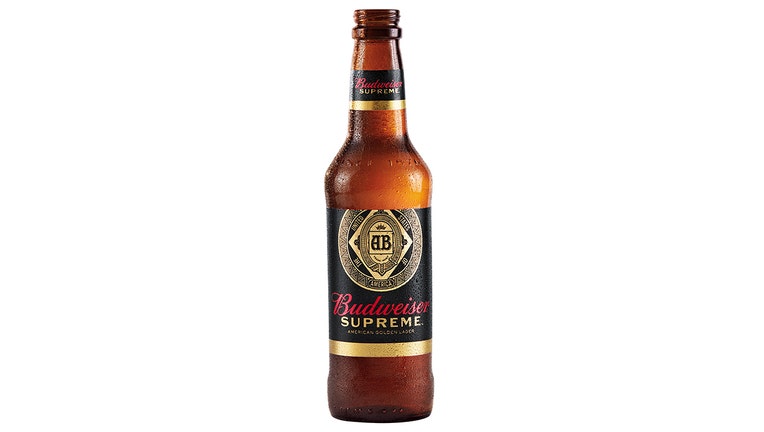 A bottle of Budweiser Supreme. (Handout Photo Courtesy of Anheuser-Busch)

NEW YORK - The brewing giant Anheuser-Busch this week introduced a new beer to New York and a handful of other markets. The new beer, dubbed Budweiser Supreme, is billed as a "reimagining" of its classic lager — nothing radical, just a new take on a familiar beverage, which is the American golden lager.

Budweiser Supreme is brewed with honey malt and the same yeast used for the classic Budweiser and triple-filtered. At 4.6% alcohol by volume, Supreme has slightly less alcohol than Budweiser does, which has an ABV of 5%.

Budweiser Supreme, which debuted on Monday, comes in 12-ounce bottles, 12-ounce cans, and 25-ounce cans (which are popular at sports venues) in select parts of California, Ohio, New York, Texas, and Washington, D.C.

Rob Naylor, director of product innovations at Anheuser-Busch InBev, and Daniel Blake, vice president of marketing, gave an overview of the new beer to journalists last week. Here is some of what they said, edited for length and clarity.

Naylor began with the beer's characteristics.

ROB NAYLOR: What can we do with Budweiser and how can we really expand on this amazing beer? We started looking at some of the modern malts that we had. How can we give us that floral note, that honey note that we really wanted to stand out? So this beer is actually brewed with a honey malt — that's giving you the amazing color. It's going to give you amazing sweetness. And then the way we brew it, making it very smooth.

I'm getting a little bit more of a bitterness in this than you would with a Budweiser but I think it really balances with the body and the sweetness of the honey malt that we have right there. So I get maybe a little bit of a caramel note, kind of a toasted note coming from the malt. But it still finishes very fast and clean.

What's the why behind this? What would you consider success to keep it on the market unlike some other products that Budweiser has tried in the past and for whatever reason were discontinued?

DANIEL BLAKE: I think there's an opportunity that we saw in the marketplace to bring that great Budweiser flavor and refreshment and with something that is a little bit of a fuller body, that has subtly sweet notes due to the honey malt. Supreme is particularly exciting for us because it fits firmly in that sub-segment of the industry that is seeing a ton of growth, which is this classic lager space. In the past, we've launched bolder, higher-ABV extensions — a number of those through the Reserve series that were great as limited-time options but not great as permanent just because they're not quite as drinkable, not quite sessionable. Supreme is very sessionable — it's great for a hot day out in the backyard with friends and family.

We're taking a very thoughtful, methodical approach to how we launch this. Five focus markets for the brand is how we identified them. We're going to be very focused in terms of the distribution, the types of accounts that the product shows up in, and build the brand over time. We really want to build Supreme in an organic, natural way. And one that I expect to be around for many, many years to come. This is not a limited-time-only offering.

So not in St. Louis (Budweiser's home market)?

BLAKE: Not, not in St. Louis. Obviously, St. Louis being the home of Budweiser already has a lot of focus for both Budweiser but also Budweiser Select — it's a huge brand. So you don't want to distract focus from those brands in St. Louis. And so we're going to some new focus markets where Supreme can really stand out and we can test and learn and build this thing over time.

Well, if it generates buzz, you'll have people in St. Louis making road trips to Cincinnati to buy cases of it and bring it back. You never know.

BLAKE: That would be an amazing, amazing situation.

Arun Kristian Das is the chief spirits (and now beer) correspondent — a totally fake title — and a senior digital content creator for Fox5NY.com. Follow him on Twitter @arunwithaview.