SCAPPOOSE, Ore. - A little green doll has served as a morale booster and has brought smiles and a feeling of comfort and connection to fire crews battling wildfires in Oregon and Colorado, and he just might be making plans for a visit to California soon. 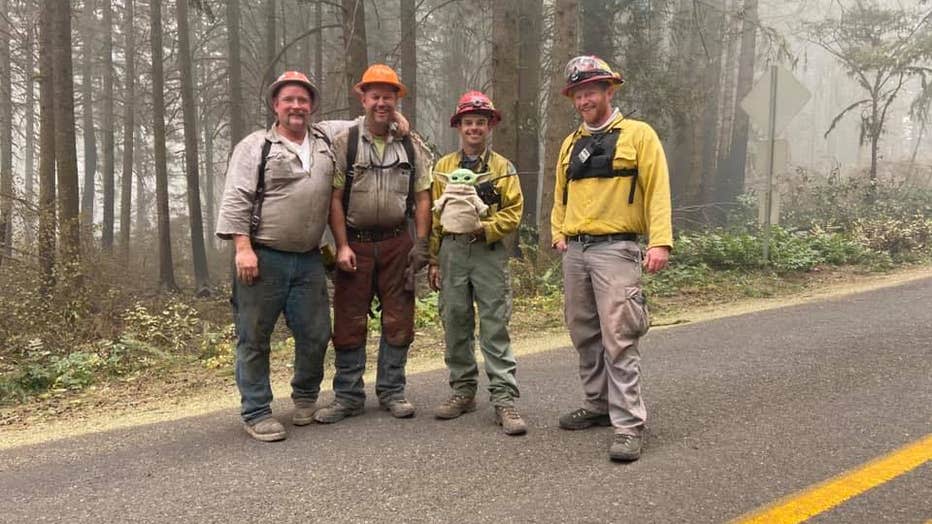 Earlier this month, a 5-year-old Oregon boy, Carver Healey, gave up his beloved Baby Yoda Star Wars doll and sent it away to accompany firefighters who were battling wildfires raging in his state. 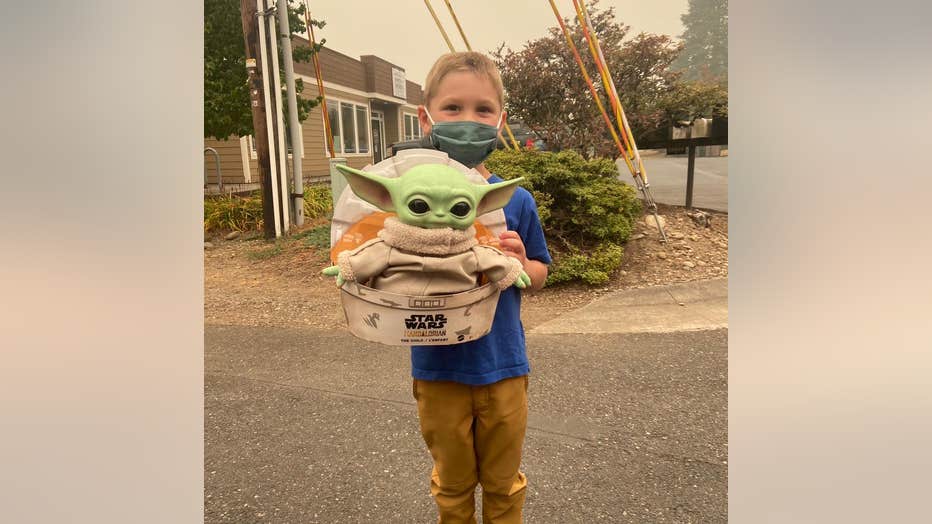 The doll was first given to a friend of Carver’s family, Tyler Eubanks of Scappoose, Oregon, who had started organizing a supply drive for crews on the front lines of the wildfires.

Within one day of launching the drive, she collected a trailer full of donated items, and that’s when she came upon Baby Yoda. Along with the doll was a note: “Thank you firefighters. Here’s a friend for you, in case you get lonely. Love, Carver.” 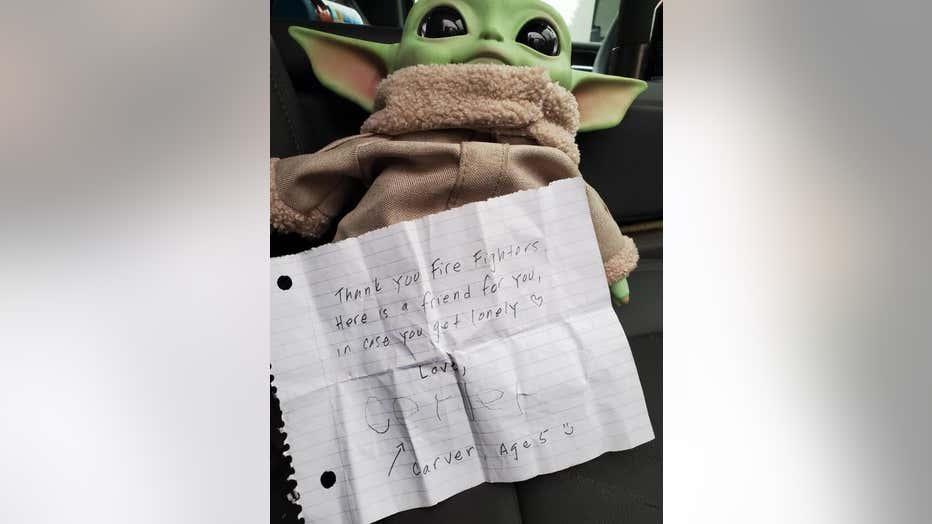 “Once we read the note, I thought, I really need to get Baby Yoda up there,” Eubanks explained to KTVU.

And that’s exactly what she did. The doll was packed up along with the trailer, and Eubanks made sure Baby Yoda made his way into the hands of fire crews.

On Sept. 15, she posted sweet photos of firefighters who had received both the note and the doll. Members of a fire crew in Clackamas County were seen welcoming Baby Yoda to its team with kisses and hugs.

What happened next was beyond anything Eubanks could have imagined.

“Baby Yoda is going fire camp to fire camp. I haven't had any control where he goes,” Eubanks said, though she’s been getting contacted through texts, direct messages, and voicemails providing updates on the doll’s travels and what he’d been up to.

So far, Baby Yoda has hung out with crews at four different fires in Northern Oregon and was then brought to Southern Oregon, where a medic took Baby Yoda on a road trip with her to Colorado to join crews who were battling the 125,000 acre Cameron Peak Fire in the northern part of that state.

Eubanks started a Facebook page called “Baby Yoda Fights Fires,” chronicling the journey of the green, wide-eyed doll, which was being accompanied by the handwritten note from its 5-year-old owner. “Baby yoda is bringing the force to our firemen and woman to bring them strength!” Eubanks shared on Facebook. 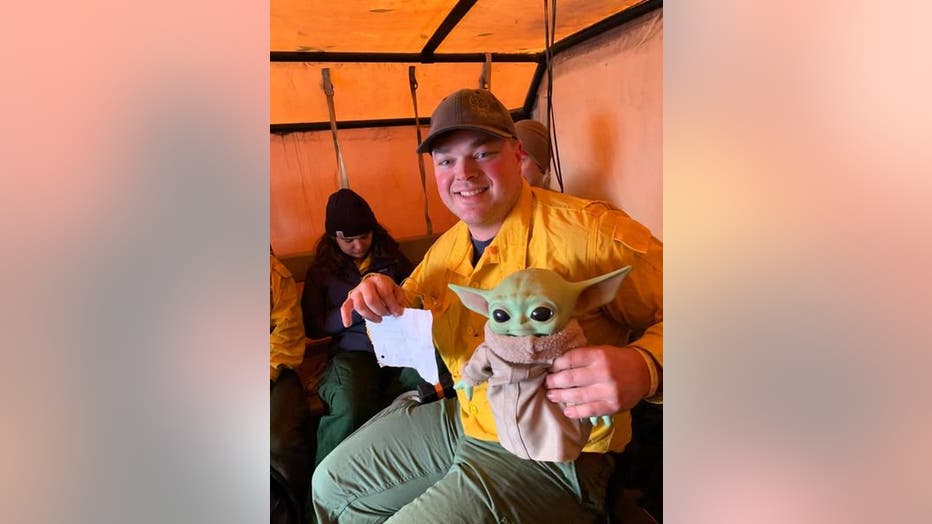 The doll has been seen in photos being hugged, cradled and carried around by grown men and women who felt the force with them, the force of support and connection that the doll represented. 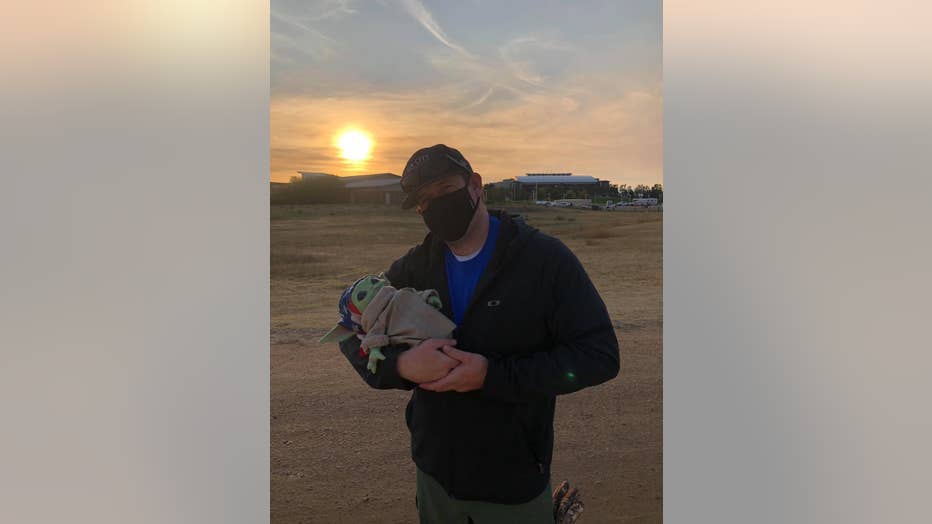 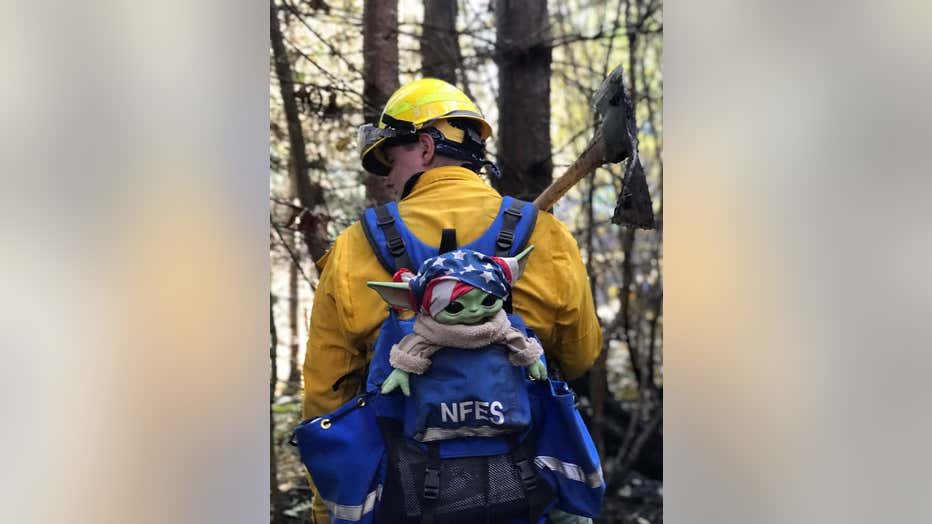 Baby Yoda has been seen on the fire lines, accompanying crews as they cut down trees and other fuel.

He’s made an appearance during live news feeds to bring updates on fires. He’s also sat alongside medic teams and kept members of the National Guard company. He's even joined pilots who were conducting aerial support over fires. 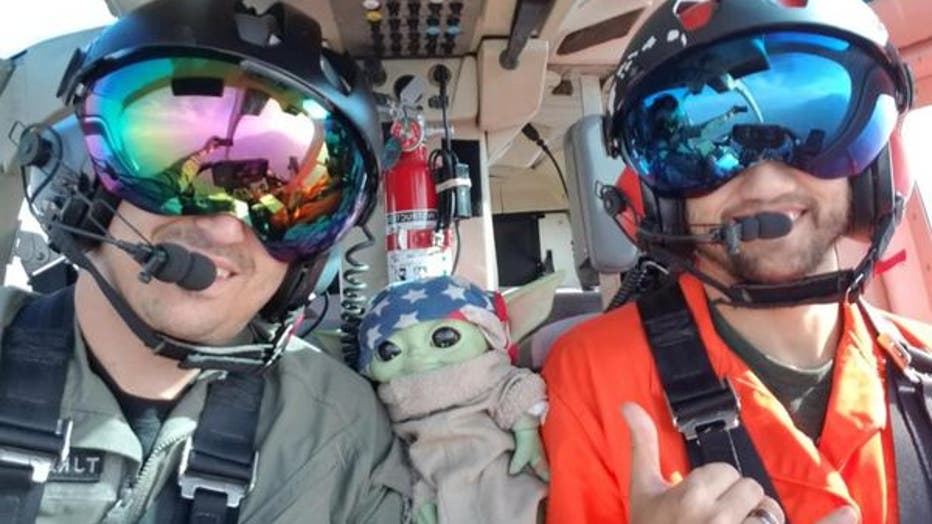 Somewhere early on in his journey, he changed up his look, picking up a new American flag scarf as an accessory. In Colorado, he was outfitted with a new T-shirt, compliments of fire crews there. 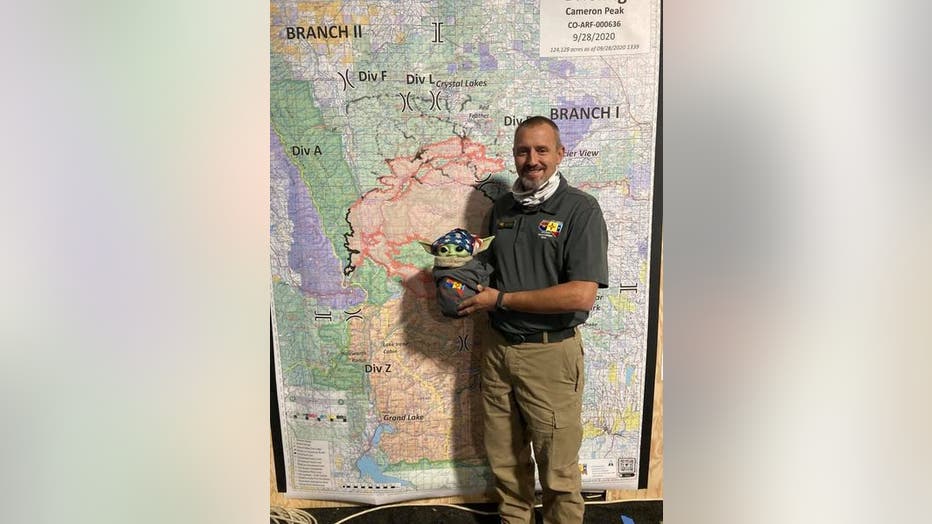 He's gotten a little scuffed up and dirty too, which only further demonstrated how many people he's touched and affected along the way.

“He’s a huge morale booster for every firefighter and every national guard, and they’re super excited to get a hold of him,” Eubanks said, adding that she felt the doll brought fire crews a sense of connection and offered the outside world an inside look at what they do. 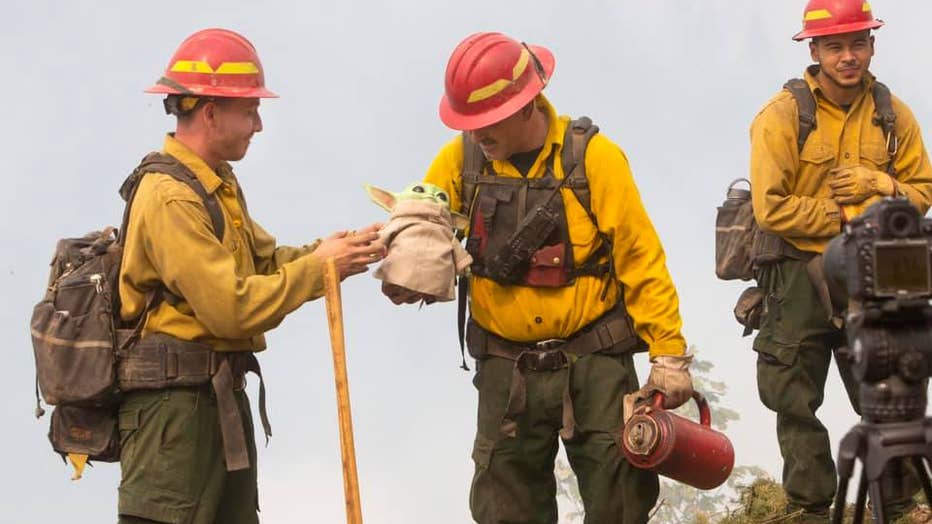 Facebook user Nancy Simon expressed just that in a comment. "Knowing what these firefighters are going through day after day... to see them posing and smiling is absolutely priceless," she wrote, adding, "Carver found the perfect way to give them all smiles."

Barb Allen shared, "I think its wonderful to see the smiles on the faces of the firefighters and other rescue personnel. This personalizes their efforts for me, in a way that I never expected."

Other Baby Yoda fans shared of how these moments have renewed their faith in humanity when they needed it most.

"When I first saw this it made my heart smile, as I looked through the photos and videos I got tears in my eyes," Trenia Critchfield shared. "The amount of joy baby yoda and the note from Carver is bringing to these amazing firefighters is absolutely heartwarming. I am so thankful to Carver and his family for bringing light in a time of such darkness."

And Carter Dvorak commented, "After living through all the stress and negativity that feels like it is everywhere, I have been trying to look deep into the positive and hopeful things people are doing right now. This page and the story behind it fills me with such joy." 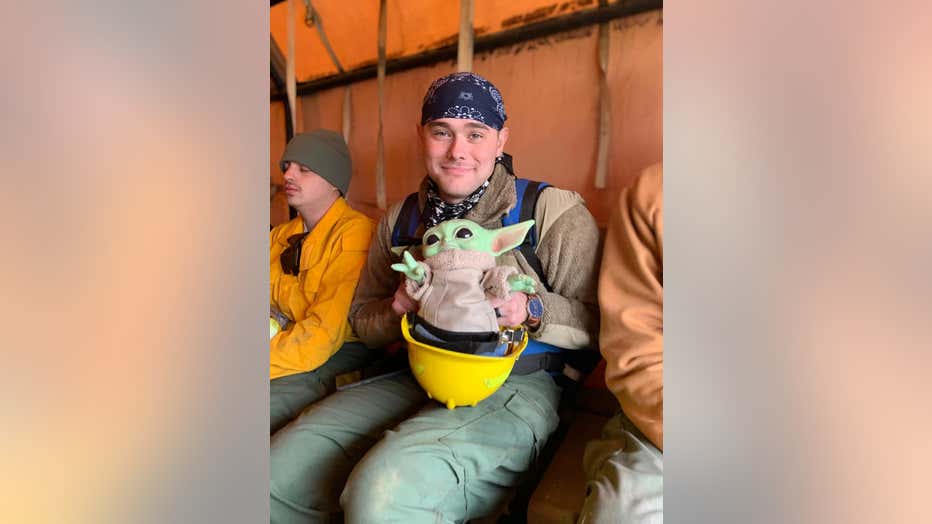 Eubanks said she’s been completely blown away by the impact of this one symbol that was born out of a kind and thoughtful gesture from a little boy. “I think with all the negativity in the world, he's a bright light that people are getting attracted to and they're seeing the innocence of what a child can do in a bad situation.” she said.

Eubanks has received multiple requests for the doll to make the trip west to California, where crews were battling 27 major wildfires, and she said she hoped to make that an upcoming destination. So stay tuned to see where the force will take Baby Yoda next.

You can follow the adventures of the fire fighting Baby Yoda here.