Darren James spoke with Chris Williams of FOX Television Stations about what it was like being a billionaire for four days.

BATON ROUGE, La. - Darren James and his family felt what it was like to be billionaires after claiming his wife’s bank accidentally deposited $50 billion dollars into her account.

James, 47, said his wife showed him what appeared to be a deposit on her smartphone when he came home from work on June 12 in Baton Rouge, Louisana.

"I’m like, ‘Where did that come from?’" he told FOX Television Stations on Sunday. "And all we were thinking was who’s going to be knocking on our door ... because we don’t know anybody with that type of money to begin with."

The father of two said he tinkered with the far-fetched idea of an unknown rich uncle leaving his family the money, but the family knew right away the money wasn’t theirs and contacted Chase Bank.

"We knew it wasn’t ours. We didn’t earn it, so we couldn’t do anything with it," he continued. 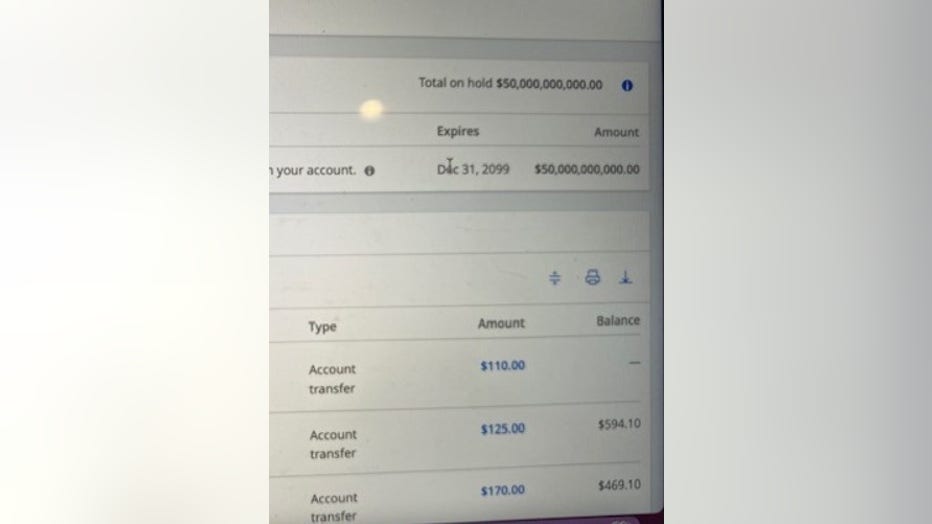 James said he didn’t think twice about keeping the money, knowing it would be considered theft. He previously worked as a law enforcement officer for the Louisiana Department of Public Safety.

Chase Bank finally corrected the error - but not until four days later.

"We had a technical glitch over a week ago impacting a limited number of accounts," a company spokesperson told FOX Television Stations in a statement Monday. "The issue has been resolved and those accounts are now showing accurate balances."

"It was a great feeling while it was there to see that many zeroes in your account," he added. "It was pretty neat to see what it looked like."

James, who works as a real estate agent, said if he actually received $50 billion, he would’ve used it to help other people such as building a children’s hospital.

"I would bless other people—to give people hope that there is positive in this world," he continued. "That’s what my biggest dream is."

However, James said the mistake is leaving him concerned. He said the bank hasn’t told him how the error occurred, and he’s wondering if his wife’s account has been compromised.

RELATED: Woman arrested after she refuses to return $1.2 million put into her bank account by mistake

"I want to know why it happened," he said. "That makes you think about the security of the account."

He hopes his story inspires other people to do the right thing and to think of ways of giving back.

Keeping money accidentally deposited into a bank account is considered a crime.

In April, a former sheriff’s dispatcher in a suburb of New Orleans was arrested, accused of refusing to return more than $1.2 million that had been accidentally deposited into her brokerage account, authorities said.