NASA began the process of rolling out the Space Launch System to the launchpad for the first time. The 322-foot-tall moon rocket known as Artemis-1 is headed to Kennedy Space Center launchpad 39B for the first time, but it won't be leaving Earth, at least not yet.

KENNEDY SPACE CENTER, Fla. - NASA began the process of rolling out the Space Launch System to the launchpad for the first time.

The 322-foot-tall moon rocket known as Artemis-1 is headed to Kennedy Space Center launchpad 39B for the first time, but it won't be leaving Earth, at least not yet.

"I think it’s really going to be breathtaking," Artemis Launch director Charlie Blackwell says of seeing the full SLS outside the Vehicle Assembly Building for the first time. "It'll be something really special for me, and I know for everyone that has worked on this."

More than 3,800 companies across 50 states played a role in getting the Artemis-1 rocket complete.

The roll to the pad is for a wet dress rehearsal when launch managers conduct all steps in the countdown except the liftoff. It's a critical end-to-end test for all teams that support the rocket, from running the launch countdown, fueling the rocket and testing ground systems.

RELATED: NASA making strides in their mission to moon, preparing for Artemis liftoff

On Monday, teams in the VAB started removing platforms surrounding the rocket body. 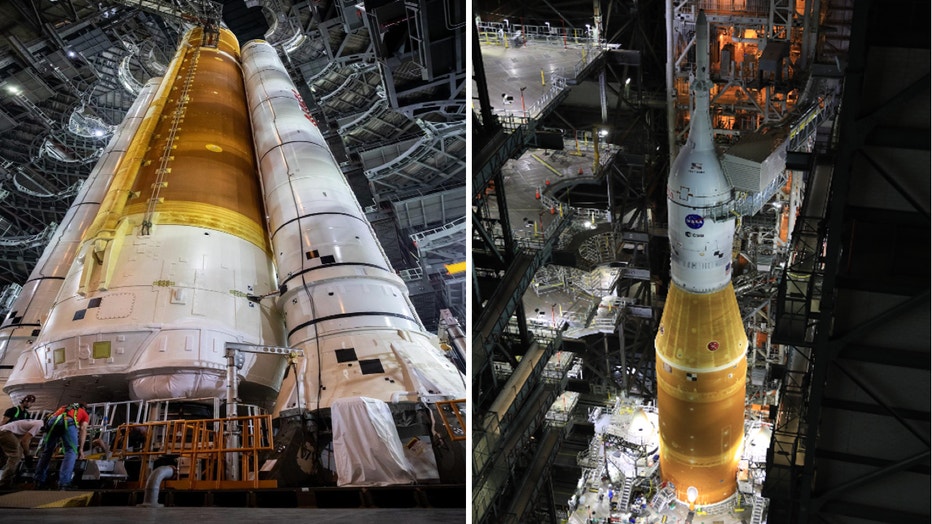 Inside the Vehicle Assembly Building at NASA’s Kennedy Space Center in Florida, work platforms are being retracted from around the Artemis I Space Launch System rocket and Orion spacecraft in preparation to roll out for testing. Credits: NASA

The crawler-transporter 2 arrived outside the VAB over the weekend in preparation for the journey. The crawler will move the mobile launcher and Artemis-1 to launchpad 39B, taking about 11 hours to complete the 4-mile move at speeds between 1 and 2.8 mph.

NASA managers have expressed their excitement about the milestone event in a call with reporters. Not since the Saturn V rocket that launched Apollo astronauts to the moon has a vehicle this large made the journey to Launch Complex 39.

"That's really an iconic moment for this vehicle, and to be here for a new generation of a super heavy-lift exploration class vehicle. Thursday is going to be a day to remember," said Tom Whitmeyer, NASA associate administrator for exploration systems development.

Whitmeyer compared seeing the Saturn V and SLS rockets as like looking up at the National Monument in Washington, D.C. The SLS is about 200 feet shorter than the obelisk, but it's closer to 400 feet tall on the mobile launcher.

Blackwell-Thompson said there are certain weather conditions NASA needs to make this slow roll happen. Movement won't start if there is a greater than a 10 percent chance of lightning within 20 nautical miles or winds greater than 40 knots. Weather officers will also look for hail, which needs to be under a 5 percent chance within five nautical miles. Temperature is a factor and must be at least 40 degrees and below 95 degrees.

Launch weather officers with the 45th Weather Squadron are tracking some potentially inclement weather on Wednesday with thunderstorms, but it's expected to move out in time for roll on Thursday.

RELATED: SpaceX to light up night sky with next Starlink launch on Friday

"Right now, the forecast looks really nice for all on Thursday," Blackwell-Thompson said. "So let's all keep our fingers crossed that that weather pattern holds, and hopefully, we'll have a favorable forecast for Thursday."

NASA managers said they are targeting the rollout to start around 5 p.m. Thursday. Live views of the move will be available on KSC's YouTube channel beginning at 4 p.m.

Blackwell-Thompson said if the rollout goes well operations for the wet dress rehearsal could begin on April 2 with the full test on April 3. It will take about 8 hours just to fuel the rocket. The countdown will go to T minus 10 seconds. After that, the rocket will be rolled back into the VAB where it will stay until its final rollout to the launchpad for liftoff.

Teams at KSC had been preparing to roll the rocket out of the VAB sometime in February to conduct a wet dress rehearsal. However, that shifted to mid-March due to an issue discovered with one of the rocket engine controllers.

As of the last update, NASA is eyeing launch dates between June 6 and 16.

GET UPDATES TO THIS STORY AT FOXWEATHER.COM