TALLAHASSEE, Fla. - Florida state Sen. Annette Taddeo jumped into the Democratic primary race for governor on Monday, saying she is the candidate who can excite voters in her party’s bid to oust Republican Gov. Ron DeSantis next year.

Crist, a Republican-turned-independent-turned Democrat, tapped Taddeo as his lieutenant-governor running mate in his losing effort to recapture the governor’s office in 2014. Crist was defeated by former Gov. Rick Scott, who is now a U.S. senator.

"I have tremendous respect for Charlie. I love Charlie, and I know he has a huge heart. But this race is not about Charlie or about me. This race is about the future for Floridians and who is going to be the best person to create the coalition and create the excitement from the ground up, for us to win in Florida," Taddeo told reporters after filing paperwork for the race Monday morning in Tallahassee.

In a prepared statement, Crist praised Taddeo, a former chairwoman of the Miami-Dade County Democratic Party.

"I know and respect Annette Taddeo. We share a common goal of moving Florida forward and away from the negative and divisive politics damaging our state today under the failed leadership of Gov. DeSantis," he said. "We, like most Floridians, know we can and must do better. Time and time again, Annette has stood up for her community, and that's why I asked her to be my lieutenant governor in 2014. Annette will bring spirit, heart and important perspective to this race."

Taddeo, who grew up in Colombia, joined the Florida Senate in a 2017 special election to replace a disgraced Republican lawmaker who was forced to resign following a profanity-laced and racially tinged outburst at a private club near the Capitol.

Taddeo was outgunned financially by her opponent, former Rep. Jose Felix Diaz, who had the backing of GOP Senate leaders. At the time, Democrats viewed the 2017 special election and Taddeo’s win as a litmus test for then-President Donald Trump and his policies. But DeSantis, Trump’s close ally, edged out Democratic challenger Andrew Gillum in the 2018 gubernatorial race, and Democrats lost a number of legislative and congressional seats in 2020.

Taddeo, however, said she believes she has what it takes to galvanize Hispanic voters and appeal to progressives, as Democrats struggle to regain a foothold in Florida, where Trump defeated President Joe Biden by three percentage points last year. 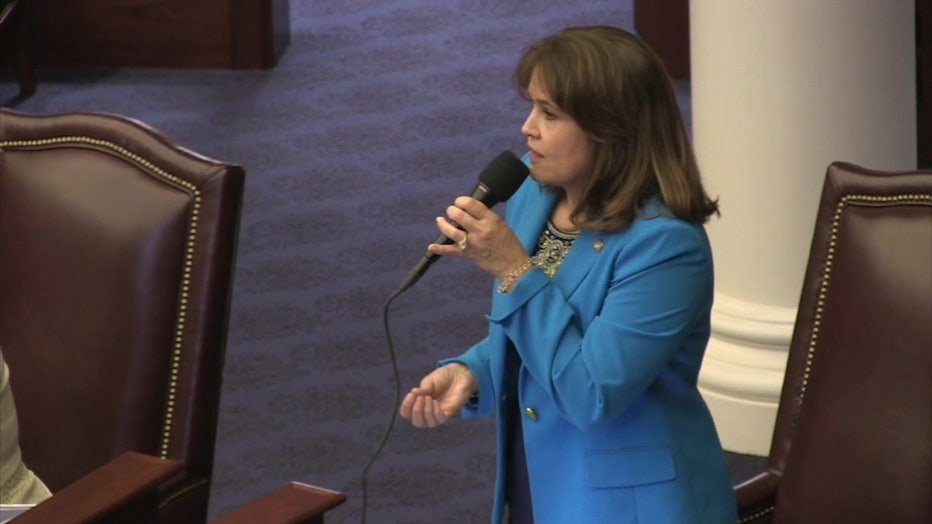 "I am a lifelong Democrat and somebody who has never stood down to our democratic values, always has been willing to stand up no matter how tough the fight is. That is what we need," she said.

When she and her family lived in Colombia, Taddeo’s father, who was a pilot in World War II and the Korean War, was kidnapped by revolutionary guerillas. The family relocated to Miami, where Taddeo eventually established a successful business that offers translations in more than 200 languages.

A campaign video released Monday detailed her father’s kidnapping as well as other adversities Taddeo has overcome, such as being born with a cleft lip.

"I was bullied, made fun of and told that I would never be normal. After enduring 19 surgeries just so I could smile, I learned early on how much it means to have access to affordable health care," she said in the video.

RELATED: Gov. DeSantis says he is running for reelection in 2022 -- not for president

The video also pointed to Taddeo’s come-from-behind victory in the 2017 legislative race, which made her the first Latina Democrat elected to the Senate.

"When party bosses told me not to run, I beat the odds and made history," she said in the video.

Speaking to reporters on a brisk morning near the Capitol, Taddeo said she intends to share her story with Floridians "to excite the base and really create the momentum that is needed" to win.

She said grassroots activists throughout the state urged her to enter the race, telling her "we need a candidate that can excite us, and that can, you know, really get us to the finish line, not just in the primary, but in the general" election.

"I know people all across the state are disgusted about what is happening, all because it is more important to be popular with voters in Iowa than being a governor who actually governs for all Floridians," Taddeo said, referring to widespread speculation that DeSantis plans to run for president in 2024. "This governor is currently behaving more like the people we cry foul against, the Maduros in Venezuela. Those are the places where you take the funding away. Those are the places where you threaten to remove people from their duly elected offices by the people."

Fried, Florida’s only statewide elected Democrat, said she welcomed Taddeo to the race.

"I got into this race because Florida needs new leaders accountable solely to the people of Florida, not to the special interests who have controlled Tallahassee for decades," Fried, a former medical marijuana lobbyist, said in a statement, adding that she is "confident our team and our vision of something new for Florida will win this primary and general election."

The Republican Governors Association issued a statement Monday that took aim at the Democratic field.

"Florida Democrats in the gubernatorial primary were already … a disaster, and adding a third candidate to the mix will surely make things even worse for them," Joanna Rodriguez, a spokeswoman for the GOP group, said. "Annette Taddeo, Nikki Fried, and Charlie Crist are in a race to the left to shore up the Democratic base. As Florida Democrats continue to fight with each other, they’re making the case all on their own how out of touch they are with a majority of Floridians.

Taddeo acknowledged that Democrats face challenges running against DeSantis, who has amassed a $58 million campaign war chest as he holds fundraisers throughout the nation.

"Look, there is no question that there’s a lot of money that the governor is collecting, but we all know that doesn’t decide elections. People do," she said. "You know the past history, just as close as this last election, clearly shows that the underdogs, the people that nobody expected on both parties and both sides, actually came on top. So those who ignore that are ignoring history."