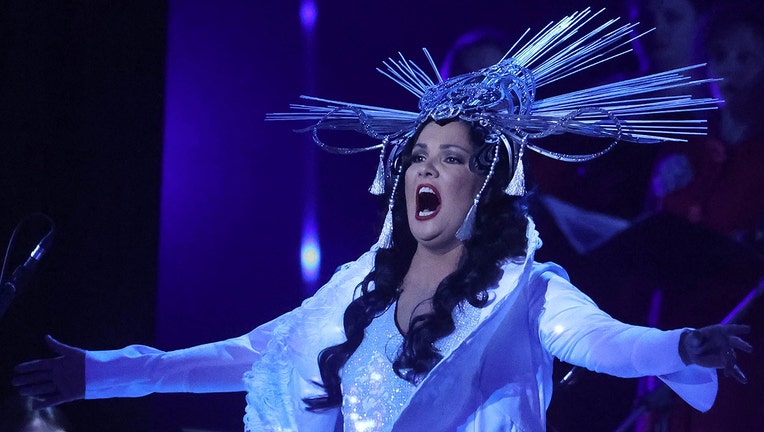 Operatic soprano Anna Netrebko performs in a concert at the State Kremlin Palace in Moscow, Russia, on Sept. 18, 2021. (Photo by Vladimir GerdoTASS via Getty Images)

NEW YORK - Soprano Anna Netrebko withdrew from her future engagements at the Metropolitan Opera in Manhattan rather than repudiate her support for Russian President Vladimir Putin, costing the company one of its top singers and best box-office draws.

"It is a great artistic loss for the Met and for opera," Met General Manager Peter Gelb said in a statement Thursday. "Anna is one of the greatest singers in Met history, but with Putin killing innocent victims in Ukraine, there was no way forward."

Gelb had said Sunday that the Met would not engage artists who support Putin.

The Met made repeated efforts in recent days attempting to convince Netrebko to repudiate Putin but failed to persuade her, a person familiar with the developments said, speaking on condition of anonymity because that detail was not announced.

The Met's decision followed the collapse of the international career of Russian conductor Valery Gergiev, who has been close to Putin as artistic and general director of the Mariinsky in St. Petersburg.

The invasion of Ukraine has led to a show of solidarity in the arts and culture world with Ukrainians and a backlash against the Russian government and those with ties to it that won't reject Putin's actions. The ripple effects have also reached the international sports world.

Netrebko, a 50-year-old from Krasnodar, received the People's Artist of Russia honor from Putin in 2008.

She was photographed in 2014 holding a Novorussian flag after giving a 1 million ruble donation (then $18,500) to the opera house in Donetsk, a Ukrainian city controlled by pro-Russia separatists.

On Tuesday, Netrebko withdrew from all her upcoming performances. Her next listed performance was at Barcelona's Gran Teatre del Liceu on April 3, followed by three concerts with her husband, Azerbaijani tenor Yusif Eyvazov, and an April 13 concert with the Berlin Philharmonic.

"I am opposed to this senseless war of aggression and I am calling on Russia to end this war right now, to save all of us. We need peace right now," she said. "This is not a time for me to make music and perform. I have therefore decided to take a step back from performing for the time being. It is an extremely difficult decision for me, but I know that my audience will understand and respect this decision."

There was no immediate response from Netrebko to Gelb's announcement.

The Met also said it would construct its own sets and costumes for next season's new production of Wagner's "Lohengrin" rather than share them with Moscow's Bolshoi Opera, as originally planned.

Gergiev was fired this week as chief conductor of the Munich Philharmonic, and the Gergiev festival, an annual event since 1996, was canceled by the Rotterdam Philharmonic Orchestra, where he was principal guest conductor from 1995 to 2008. He also was dropped by the Vienna Philharmonic, the Edinburgh Festival in Scotland and Milan's Teatro alla Scala.