In the post, two officers are shown with attached cardboard signs, apparently confiscated from homeless individuals panhandling for money.

MOBILE, Ala. - A police chief in Alabama apologized on Monday for an "insensitive" post on Facebook showing a "homeless quilt" made of signs used for panhandling.

In the post, two Mobile officers are shown with various attached cardboard signs, apparently confiscated from homeless individuals panhandling for money in the south Alabama city.

“Wanna wish everybody in the 4th precinct a Merry Christmas, especially our captain. Hope you enjoy our homeless quilt," the post read. "Sincerely Panhandler patrol."

In the post, which has seen been deleted, the officers also can be seen smiling as they hold up the cardboard. A reposted photo was shared more than 16,000 times, drawing over 5,000 comments.

"Although we do not condone panhandling and must enforce the city ordinances that limit panhandling, it is never our intent or desire as a police department to make light of those who find themselves in a homeless state," Battiste said in a statement. "Rather, our position has always been to partner with community service providers to help us help those faced with homelessness with hope to improve their quality of life.”

The officers are now under an internal investigation, FOX10 reported.

In an interview on Monday, Battiste told FOX10 the department has to "take responsibility for it, we did it."

“We have to own it at this point," he told the television station. "Those officers were given a mandate of addressing those concerns of panhandling, unfortunately they took it to a level that they should not have taken it too and for that as the Chief of Police I apologize."

Mobile passed a panhandling law in 2010, which stipulates that asking for money is only allowed outside of a downtown area popular with visitors. Panhandling in the restricted zone can result in a fine of up to $500, community service and up to 6 months in jail. 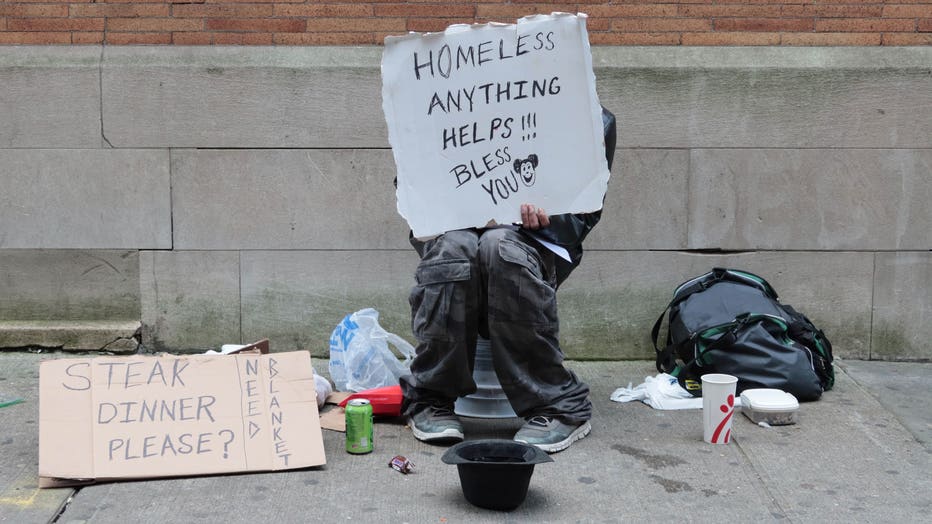 A file image dated Oct. 18, 2019 shows a homeless person holding up a sign on a sidewalk. (Photo by Gary Hershorn/Corbis via Getty Images)

In Mobile and Baldwin counties, more than 2,500 people sought help in 2019, according to Housing First, a group working to end homelessness in the region.