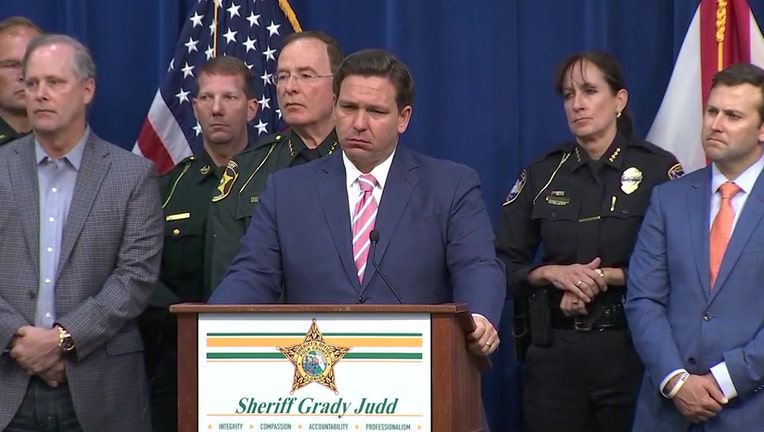 TALLAHASSEE - Gov. Ron DeSantis suggested Tuesday that the Republican-dominated Legislature could consider a controversial proposal aimed at cracking down on disorderly protests when lawmakers return to Tallahassee in November for an organization session, as Democrats declared war on what they decried as a racially motivated election-year ploy.

DeSantis’ law-and-order package, backed by incoming GOP legislative leaders, would create new felony crimes when property is damaged or when people are injured as a result of protests involving seven or more individuals. The measure would also make it a crime to obstruct traffic during unpermitted protests or demonstrations and do away with bail or bond for people involved in violent protests.

The proposal comes as Republicans double down on efforts to deliver a second presidential victory to Trump in Florida, a battleground state with 29 prized electoral votes, on Nov. 3.

“It’s going to have broad support, certainly from the Republican caucuses, in both chambers. It may be something that you need to act,” DeSantis told reporters following a state Cabinet meeting Tuesday. “Florida has handled it better, but at the same time, you constantly hear these reports of unrest. You hear threats of more unrest. That is not something that we want to deal with, without having all the tools at our disposal.”

Lawmakers are slated to return to the Capitol on Nov. 17 for an organization session where incoming Senate President Wilton Simpson, R-Trilby, and incoming House Speaker Chris Sprowls, R-Palm Harbor, will take over as leaders of their respective chambers. Organization sessions are largely ceremonial and typically last just a day, but DeSantis also could call a special session to take up the protest proposal.

“If we have a special session, it would definitely be a priority bill that would be included,” Simpson said in an email when asked Tuesday about DeSantis’ remarks.

But Democrats blasted DeSantis’ plan, calling it an unconstitutional attack on First Amendment rights and an undisguised attempt to galvanize support for the Republican president in a state with a history of narrow elections.

“Let’s be extremely clear about something: This is a blatant overreach from the governor and Republicans who are actively undermining the Constitution,” state Rep. Shevrin Jones, a West Park Democrat who is running for the state Senate, told reporters during a video conference Tuesday afternoon.

Jones said the country was “built and shaped as a result of peaceful demonstrations and protests.”

DeSantis’ proposal “is a desperate violation of our constitutional rights just ahead of a critical election in which every single vote counts,” Jones added.

“This is an active, intentional effort to depress turnout and participation in the democratic process. It’s an insult,” Jones said.

Jones and other Black leaders also accused DeSantis of using the legislative proposal as a ploy to incite fear among white voters.

“What you’re doing is you’re putting back into law historical things that we’ve worked very hard to get rid of. And what I’m speaking to specifically are black codes, which were pre-Jim Crow laws … that prohibited groups of African Americans from being able to gather,” New Florida Majority political director Dwight Bullard, a former state senator, said. “It’s fascinating what the governor is trying to do because we always call it dog whistling, but it’s no longer dog whistling when everybody hears it.”

The plan released Monday came after months of protests throughout the country in response to the disparate treatment of Black people by police and amid a national reckoning about centuries of racial inequities in other facets of society.

“Just speaking to the voters out there who may be feeling afraid or who may be feeling like it’s the government putting its knee on your neck, because a lot of people were upset yesterday,” Driskell, an attorney, said. “Please understand that this November, you have to exercise your power to vote.”

The governor acknowledged that Florida has largely escaped the violence that’s erupted in other states but maintained that his proposal is designed to ensure people remain safe.

Democrats assailed the governor for prioritizing a crackdown on protests over other problems beleaguering Floridians, such as a troubled unemployment-compensation system, rising numbers of COVID-19 deaths and uncertainty about the state’s financial future.

“We all know what this is. This is a desperate ploy to distract Floridians from DeSantis’ own deadly and reckless record and his indifference to just the pain and suffering of vulnerable Floridians,” Rep. Carlos Guillermo Smith, D-Orlando, told reporters. “The first thing he wants is to crack down on protesters who did the very same thing that Martin Luther King Jr. and Congressman John Lewis did in 1965 when they shut down the Edmund Pettus Bridge in Selma.”

Sen. Oscar Braynon, a Miami Gardens Democrat who is not seeking re-election due to term limits, dared DeSantis to immediately order lawmakers to convene a special session.

Cities and counties are struggling financially because DeSantis has done “such a piss-poor job with COVID and their budgets are hurting right now,” Braynon said.

“These are all the things you’ll find out in a special session,” he added.

Democratic legislators, who are outnumbered in the House and the Senate, vowed to fight “tooth and nail” to defeat the governor’s plan.

“With all due respect sir, you just declared war on our civil rights,” Jones said.