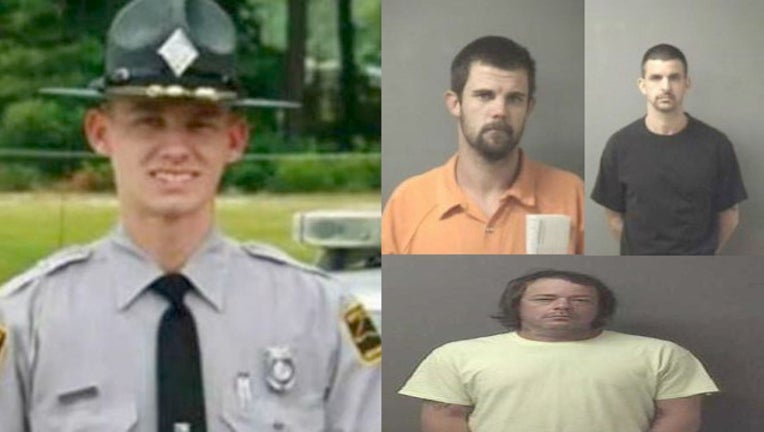 WILSON COUNTY, N.C. (FOX 46 CHARLOTTE) - Three people have been charged in connection with the shooting of a third-generation North Carolina State Highway Patrol trooper Monday evening, according to the Wilson County Sheriff's Office.

WRAL reports that John David Jones, 36, was arrested late Monday and charged with assault with a deadly weapon with intent to kill inflicting serious injury and assault on a law enforcement officer. He was the subject of a massive hours-long manhunt Monday night. He was later taken to Wilson Medical Center with minor injuries.

William Allen Boswell, 40, of Elm City and Bryan Jeffrey Mullins, 25, of Bailey, are charged with possession of a stolen motor vehicle, WRAL reports. They are currently in the Wilson County Detention Center under a $15,000 secure bond.

Jones will be taken before a magistrate after medical clearance, authorities said.

NC Highway Patrol has identified the victim as Trooper Daniel Harrell. He was taken to Vidant Medical Center in Greenville, and his injuries are not considered to be life-threatening, according to authorities.

Monday's shooting in Wilson County marks less than one week after a Raleigh police officer was wounded while on duty.

Raleigh Police Officer Charles Ainsworth was shot while attempting to make an arrest on Western Boulevard near Schaub Drive Wednesday night. The officer was tracking a report of a suspicious vehicle that was believed to have been involved in a carjacking, according to WRAL.

Ainsworth was shot multiple times, including once in the neck, after exiting his patrol car, authorities said. He remained hospitalized on Monday.